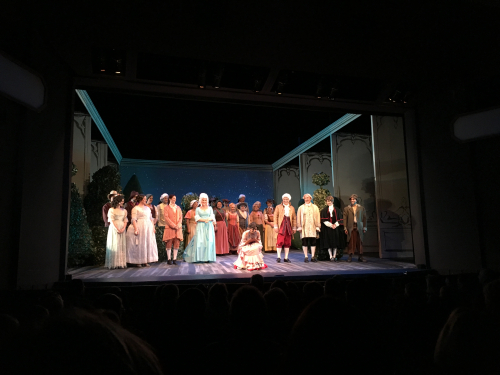 Tattling *
The audience was very enthusiastic about the performance. On the other hand, my opera companion insists that he won't go to another Mozart opera at West Bay.

* Notes *
My review of West Bay Opera's Eugene Onegin is up on San Francisco Classical Voice.

* Tattling *
The Lucie Stern Community Center was secured for much of the performance on Sunday because Hillary Clinton was having an event there while the opera was going on. The general director of West Bay Opera joked that he had asked Hillary for a "Secretary of Opera" if she wins the election.

* Tattling *
There was light whispering during the first act. Watch alarms sounded at 9pm. Audience attrition was noticeable after each intermission.

* Notes *
West Bay Opera is currently presenting an ambitious double bill of Dido and Aeneas and La vida breve. The opening yesterday in Palo Alto left a decidedly mixed impression. The evening began with General Director José Luis Moscovich appealing for donations and joking about the opera's planned IPO. He gave a concrete example of what would be done, letting us know that if everyone in the audience gave five dollars, they could have an extra orchestra rehearsal. There were cheers from the pit, and once the music started, it was clear why.

The overture for Dido and Aeneas was not together, nor was it in tune. Once it started, the singing was not particularly synchronized with the orchestra either. For the most part the singers were late, but there were times when they even got ahead. Shawnette Sulker was a cheeping, bird-like Belinda. As the sorceress, Carla López-Speziale's mode of locomotion seemed tied to her waving arms, though she occasionally added some alarming hip thrusts. She and the witches (Kristen Choi and Alexandra Mena) undulated their arms in a vaguely North African style, one guesses this is because Carthage was located near present day Tunis. López-Speziale had a bit too much vibrato for this music, and Choi sounded exceedingly legato.

Zachary Gordin was a rather static, statuesque Aeneas. Instead of conveying the emotional import of the text, he would just sing louder to indicate passion. On the other hand, Cathleen Candia (Dido) sang well, especially considering the chaos coming from all sides. Her high mezzo is pleasant, had a ease in the top, but some of her low notes did seem effortful.

La vida breve was much more mellifluous. The orchestra was tighter here, though there were points when the musicians in the pit overwhelmed the singers on stage. James Stahlman sounded pretty as la voz de la fragua. Zachary Gordin had a vulnerability as el cantaor that had some appeal. Carla López-Speziale was convincing as la abuela, her dark voice was utterly pitiful in the final moments of the opera. She and Carlos Aguilar (el tió Sarvaor) were strong. Pedro Betancourt (Paco) was plaintive. Chamaeleonic Cathleen Candia sounded vocally secure as Salud, though the role is higher than that of Dido. She was able to portray the two characters distinctly, and without much fuss.

The staging for both operas, directed by incoming Merolino Ragnar Conde, was busy. He handled the transformation of the chorus from courtiers or sailors to witches in Dido and Aeneas smoothly and he motivated the departure of Aeneas in a way that made sense. Jean-François Revon's sets were not overly elaborate, though Robert Ted Anderson's lighting design was, using every color imaginable at one point or another. The color palette used by costume designer Abra Berman used bold contrasts. Dido's dress had some elegant drapery and Salud's an abundance of ruffles and patterns.

* Tattling *
Someone had a stroke either during or just before "In our deep vaulted cell the charm we'll prepare, too dreadful a practice for this open air." There was a ruckus when help was sought for her, but thankfully, an ambulance came in fairly short order.