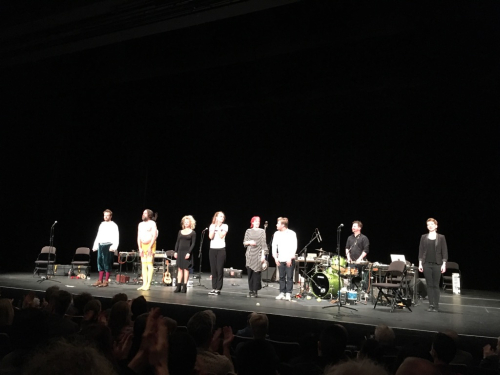 The stage has no real scenery and is littered with instruments, microphones, and various props. Alan Pagan sat at a drum kit stage left, while Ross Hughes, who shares music and sound responsibilities with Tom Haines, played ukulele and attended to other effects.

The evening was carefully controlled chaos and very engaging. From the very beginning, the unconventional nature of the production was obvious. Jonathan Broadbent, as Orsino, starts us off by wandering around the audience with a cup of mint tea, then comes to the stage with the first words of the play "If music be the food of love, play on" but in an agonizingly slow way, as if he is composing the poetry on the spot. Our Viola, Amy Marchant, wearing a damp rain poncho, asks for a man's hat and jacket, and rejected someone's rain coat in favor of something "smarter, like a blazer."

The high point of the piece is certainly the riotous Act II Scene 3, it was basically a party set to the song "What is love? 'Tis not hereafter." Jonathan Broadbent plays a very silly Sir Andrew Aguecheek here, wearing a velcro-covered cap that he catches balls on, and a ridiculous amount of balls were thrown out to the crowd so we could all try. A dozen audience members were taken on stage to dance about. A pizza from La Val's was passed around.

The most comic scenes work best. Ferdy Roberts was completely ridiculous and absurd as Malvolio when he gets the fake letter from Olivia, and his two pairs of yellow stockings with tiny yellow short shorts provoked a ton of laughs.

While I definitely appreciate how captivating the performance was, the cuts to the text are extensive. Antonio does not appear at all, and Viola's brother Sebastian only shows up at the very end. The Clown and Fabian are condensed into Feste, played charmingly by Gemma Saunders, who also is Maria. I wondered the whole time what was going to happen when Sebastian and Viola appear on stage together, since they both are played by Marchant, who simply said the lines of both parts from the stage. I don't know if this works for people that don't know the play well, but seems like it could be confusing.

* Tattling *
The audience loved this performance and it was hard to imagine anyone there was bored in the slightest.

* Notes *
Pan Pan Theatre performed a frenetic mash-up version of The Seagull at the San Francisco International Arts Festival last night. Chekhov's dark play of overlapping love triangles, artistic failure, and suicide is not only interspersed with Bach and Tchaikovsky (complete with balletic dancing), but with scenes of cocaine binges and very self-reflexive commentary.

The 75 minute piece has all six performers dressed in leotards, tights, and in some cases tutus or ballet skirts. There is much physicality on view, everyone dances. Both Una McKevitt and Judith Roddy do impressive acrobatics pretty much levitating over Dick Walsh. It was weirdly awkward and showed much strength and skill.

It was a lively evening and there were many laughs. Many audience members were brought up on stage to participate, most funny was when McKevitt demanded ten handsome men, lined the up and had each say "I love you but I can't smile" to the person to his right, one by one.

I found a small segment of Roddy and Andrew Bennett pretending to be rappers rather tiresome, but for the most part it was a raucous, fun performance. It was especially fitting that the seagulls outside of Cowell Theater could be heard during the few quiet moments of the night.

* Tattling *
The panelists for "The Future of Theater Criticism" at the Magic Theatre had to hustle over to make it in time for curtain.

Long Day's Journey into Night at the Apollo Theatre

* Notes *
A new production of Eugene O'Neill's Long Day's Journey into Night opened at the Apollo Theatre in London last month. Directed by Anthony Page, the play stars David Suchet as James Tyrone and Laurie Metcalf as Mary Cavan Tyrone (pictured left, photograph by Alastair Muir). The detailed set, designed by Lez Brotherston was beautifully lit by Mark Henderson. The leads are strong and act with great intensity. Suchet is rather pitiful, and Metcalf searing. The supporting cast is also formidable. Trevor White (James Tyrone, Jr.) and Kyle Soller (Edmund Tyrone) both give fiery performances. Soller is particularly moving in Act IV, when he speaks about being at sea.

* Tattling *
A mobile phone was heard several times in Acts I and II during last night's performance. There was some other disturbance during Act IV, it sounded like someone's iPhone was playing music.

* Notes *
Shakespeare's Globe Theatre opened a run of Love's Labour's Lost at Cal Performances yesterday. Musicians played in the audience, there were a mere five instrumentalists that played recorder, shawms, dulcian, ocarina, hurdy-gurdy, sackbut, viol, hunting horn, Baroque guitar, theorbo, and percussion. Many of the actors also walked around in the lobby and through the aisles of the house to get on stage.

The acting was very strong. The rapport that Philip Cumbus (Ferdinand), Trystan Gravelle (Berowne), William Mannering (Longaville), and Jack Farthing (Dumaine) made for spirited entertainment, but really, there were no weak links in the cast. Everyone moved beautifully, and the choreography was perfectly together, almost uncannily so. Nearly everyone sang as well, and all sounded quite lovely, especially given the cavernous space that is Zellerbach Hall. Thomasin Rand (Rosaline) had a particularly pretty singing voice, though her speaking voice was considerably less so. Paul Ready was surprisingly winsome as Don Adriano de Armado, and his Spanish accent was ridiculous without being unintelligible.

* Tattling *
There was a great quantity of bread thrown near the end of the play. The audience laughed at this, and pretty much at everything else too, though some of the wordplay was perhaps lost. A cellular phone rang just before Holofernes said "shapes, objects, ideas, apprehensions, motions" in Act IV, Scene 2.

* Notes *
Stephen Temperley's Souvenir, a play about Florence Foster Jenkins, is closing at ACT this weekend. The work is hilarious, and Judy Kaye does an impressive job singing quite badly. For the most part, Donald Corren was engaging as her accompanist, Cosmé McMoon. His piano playing and singing were both perfectly fine. R. Michael Miller's set is simple but lovely and the costumes from Tracy Christensen looked historically accurate and made use of pleasing colors.

The pacing was good, having just two characters never got dull, and one could appreciate the terrible singing even without knowing the arias or songs at hand. The first half of the evening was very funny, but after it bit it seemed somewhat cruel. A certain amount of self-delusion is probably unavoidable, and one did start to feel bad for Jenkins.

* Tattling *
The audience was sparse, though still rather noisy. Someone's listening device bothered me for most of the performance, the high pitches produced were unnerving.

* Notes *
Tom Stoppard's Rock 'n' Roll opened the 2008-2009 season at ACT last month and closes tomorrow. The play includes the years between the Prague Spring (1968) and the Velvet Revolution (1989), with a distinct focus on Syd Barrett, The Plastic People of the Universe, and Václav Havel.

The production, directed by Carey Perloff, included Douglas W. Schmidt's attractive set, which worked nicely for the many scene changes. The use of projections was ham-fisted, one did not need the year of a particular scene all over the walls, and certainly have them all spinning around was gratuitous.

The actors were fine, though René Augesen as Eleanor and Older Esme was most impressive. Perhaps this was simply because she was playing two very different characters and her range was evident.

The play itself was quite interesting if one has an interest in Czechoslovakia, or has some sense of that history. One imagines it might have been somewhat dull otherwise, as the dialogue is not as funny as one might expect from Stoppard. Music was used to good effect during the various scenes as well as in between segments.

* Tattling *
The audience was quiet and attentive, though there was one person who was turning off her cellular phone after the play had started. Naturally, she had not set her keypad to silent, so there were quite a few electronic beeps.

I had no idea what this play was about The Plastic People of the Universe, and was probably overly excited to find out that this was the case. Despite this, when the main character Jan tells his friend Ferdinand that The Plastics were more important than Havel, I was entirely shocked!