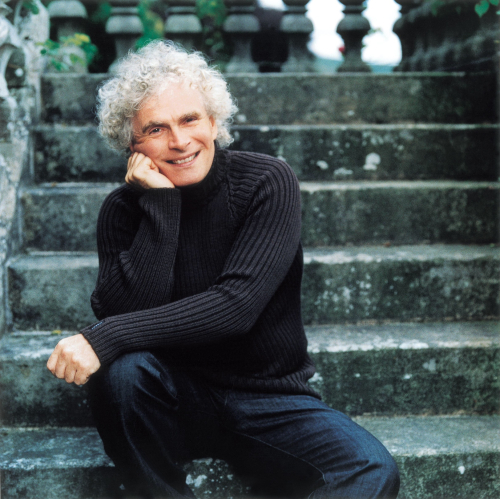 * Notes *
The day before Thanksgiving last week I went to hear Maestro Simon Rattle and the Berlin Philharmonic play a second performance at Davies Hall on their current tour. The concerts mark Rattle's farewell as principal conductor as he will not extend his contract when it ends in 2018. The orchestra sounded clean without feeling uptight or frightened, and played with a lot of joy.

The pieces all had a lot of percussion and the four musicians in charge of this had a lot to do. The Schoenberg was sinuous and graceful, while the Webern was much more spare. It was clear when we got to the Berg because everything became much more lush. The large hammer "with non-metallic tone" used in this piece is comically huge and was very amusing to watch and hear.

The Brahms, Symphony No. 2 in D major, was wonderful to hear. Played with absolute jubilation, it was one of the only times I have heard this composer without thinking of pastures and cows and was instead engaged with the cheer and vibrancy of the musicians. The horn was especially great, warm and secure without sounding overly loud or sterile.

Tattling *
The audience well-behaved, everyone clearly wanted to be there aside from one or two who left at appropriate times and without making a fuss.

It was a fitting send-off for House Usher of Davies, Horacio Rodriguez, who retired after this performance.

* Notes *
This season's final performance of Pelléas et Mélisande at Staatsoper Unter den Linden was last Wednesday. The 1991 production, the work of one Ruth Berghaus, is truly absurd. Hartmut Meyer's set and costumes were both contributed to the folly. The set consists of a downstage mound with a hole in it, which served as both the fountain Mélisande is found at, and the well in which she loses her ring in later. Upstage the sets could be changed, and this worked well for the different scenes. One of the sets included a steep staircase with rather small steps, instead of having Mélisande in a window at the top of a tower, she simply sat at the top of the stairs. None of the singers sounded as good on this staircase as they did down below, I am not sure if it was because of the acoustics, as the staircase had walls and was more upstage, or because of the steep incline which looked difficult to stay on. The costumes were quite silly: Golaud and Pelléas both looked like button mushrooms in their wide caps and long coats, Mélisande wore her petticoat with the waistline just beneath the breasts, so also looked like a mushroom of a different sort. Mélisande's hair was not long, which worried me a great deal, as she has that window scene in which Pelléas is supposedly wrapped in her tresses.

However, the sets and costumes were not nearly as ludicrous as the staging. For instance, when Mélisande play with her wedding ring at the well, she just throws it in, and puts her hands behind her back. This got the biggest laugh all evening. Or in the aforementioned hair combing in the window scene, Mélisande takes off her wig and Pelléas rubs it on himself. Basically he brings the wig to crotch-level and humps it. It was extremely hilarious. Golaud was made to flap his arms as he walked, and when he kills Pelléas, he casually walks by, sees his brother kissing his wife beneath him, and stabs downward but once and flaps on away. The worst might have been the scene before Pelléas dies in which Golaud and Pelléas' grandfather Arkel asks to kiss Mélisande on the cheek or brow. Instead of being innocent, Arkel molests Mélisande, and the scene is extremely disturbing.

The orchestra sounded wonderful under the direction of Sir Simon Rattle, the musicians were very much together. However, at times, they were much too loud, and they overwhelmed every single singer at one point or another. Andreas Mörwald, a soloist from the Tölzer Knabenchor, sang beautifully as Yniold. Hanno Müller-Brachmann was better as Leporello in the concurrent production of Don Giovanni than here. He was fine as Golaud, but his singing did not betray much emotion. Robert Lloyd sounded strong as Arkel, and his singing at the end was especially grand. It was difficult to hear how lovely Willam Burden's voice is, he was quiet as Pelléas, and was the most often overwhelmed by the orchestra. Mezzo-soprano Magdalena Kožená was most impressive in the role of Mélisande, her volume and tone were both excellent.

* Tattling *
The second tier is not quite as warm as the third, but still not all that comfortable. For the most part, the audience was quiet, though there was a mobile phone ring during Arkel's aria at the end. This was the first performance I sat off to one side, to the left in this case. One is closer to the stage and can make out the faces well, but some of the stage is certainly obscured, due to the shape of the building. I sat next to a young man possibly from the French-speaking part of Switzerland or Belgium, which I learned from a conversation in German between him and a German woman who took the empty seat next to him at intermission. They discussed the performance, and it was said that the production was rather artificial. At one point the German woman asked if he knew that a "Berliner" is a sort of pastry.