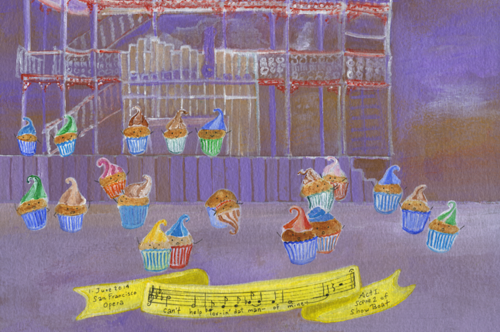 Julie warns Magnolia that it is not easy to stop loving someone in Act I, Scene 2 of Show Boat. Queenie, Joe, and some members of the chorus join in on the song.

* Notes *
Show Boat (Heidi Stober as Magnolia Hawks, Patricia Racette as Julie La Verne, Angela Renee Simpson as Queenie and Morris Robinson as Joe with chorus in Act I, Scene 2 pictured left; photograph by Cory Weaver) opened at San Francisco Opera today with a matinée performance. The production, directed by Francesca Zambello, is spectacular. Peter J. Davison's set must be characteristic of his style, employing many of the same devices as his Porgy and Bess as far as creating or changing scenes. The costumes are fetching and the choreography sharp. It is delightful to see the San Francisco Opera corps dancers looking so exuberant.

John DeMain does a wonderful job with the orchestra, and the music sounds fluent and natural. The chorus is mostly fine, though perhaps not precisely on the beat at the beginning of Act II. Harriet Harris is a funny Parthy. Bill Irwin is an elastic Cap'n Andy, his physical comedy is perfect for this role.

Though one may have been skeptical of Patricia Racette as Julie, as we have heard quite a lot of her this season, she is moving in this, and her vibrato is not bothersome. Angela Renée Simpson sings Queenie with verve, though she was a touch quiet in "Hey, Feller" in Act II. Morris Robinson is incredible as Joe, his dignified voice has such depth and power.

Michael Todd Simpson makes for an expressive Gaylord Ravenal. Heidi Stober's physicality is impressive, she plays the young Magnolia with sprightliness and is able to capture the maturity of an older woman as the piece progresses. Her accent may not be exact at all times, but her singing is lovely.

* Tattling *
Someone sitting on the back bench of the balcony had a noisy mobile phone.

* Notes *
A new production of Show Boat (Act I, Scene 1 pictured left, photograph by Robert Kusel/Lyric Opera of Chicago) opened at Lyric Opera of Chicago last month. The Friday matinée performance was an utter delight from top to bottom. Director Francesca Zambello is at her best in this co-production with Lyric, San Francisco Opera, Washington National Opera, and Houston Grand Opera. The humanity of the characters is clear and compelling. Peter J. Davison's set is not overly ornate, move cleanly, and work well with Mark McCullough's characteristically elegant lighting. The costumes, by Paul Tazewell, often make use of a pleasing contrast of red, white, and turquoise. The dancing, choreographed by Michele Lynch, is charming.

The straightforward music sounded effortless as far as the orchestra was concerned, conducted here by John DeMain. The chorus was robust, as were the principals. Cindy Gold and Ross Lehman were entertaining as Parthy and Captain Andy. Alyson Cambridge made for a striking Julie, with her incisive, but never shrill voice. Angela Renée Simpson sang Queenie with beauty and feeling. Morris Robinson was most impressive as Joe, his music is perhaps the most famous in this particular work, and he sang "Ol' Man River" with warmth and beauty. Ashley Brown was an adorable Magnolia, she chirped sweetly. Nathan Gunn turned out a believable Ravenal, the lightness of his voice having an appeal in this role.

* Tattling *
The house was full of seniors and children, which meant there were watch alarms at the hours and a lot of fidgeting. The family in Upper Balcony Row Q Seats 10-16 could not stay still, one of the sons kept running across the aisle and the other would occasionally stand up as he was unable to see the stage from his seat.