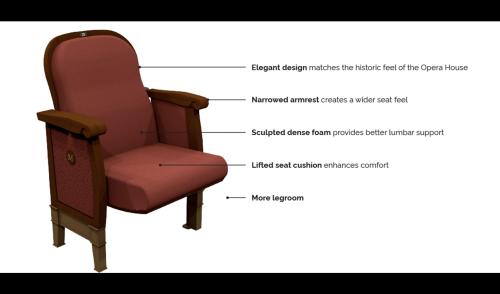 San Francisco Ballet and San Francisco Opera, along with the San Francisco War Memorial and Performing Arts Center, announced today that the previously planned seat replacement project originally scheduled for summer 2021 will now take place over a 14-week period between September 2020 to January 2021 during the continuing COVID-19 venue closure this year.

An International Salute to SF Ballet

* Notes *
The National Ballet of Canada, the New York City Ballet, and Les Ballets de Monte-Carlo are performing in a program at the San Francisco Ballet this week. The opening was last night, the National Ballet of Canada took the stage first in a piece titled A Delicate Battle. The dancing was good, though some of the angles of arms and hands were slightly off from person to person. The dance uses J.S. Bach and Gavin Bryars, and the juxtaposition was not jarring, as was intended, but simply arbitrary, any Baroque piece paired with any contemporary one would have done as well. Matjash Mrozewski's choreography was very pretty and the ending was particularly lovely.

New York City Ballet presented Duo Concertant, choreographed by Balanchine, of course. The violinist and pianist played Stravinsky beautifully. The dancers were clearly accomplished, but the piece lacked drama. The highlight of the evening was certainly Altro Canto, performed by Les Ballets de Monte-Carlo. Jean-Christophe Maillot successfully pairs contemporary movement and Monteverdi. The staging involves candles suspended from the ceiling, and this could have very easily been ridiculous, but somehow it was not. The dancing was impressive, especially the liquidness of the movement and the synchronized headstands.

* Tattling *
The audience was fairly well-behaved, though the people in front of me insisted on perching with their seats flipped up, and a couple of them could not stop whispering during the third dance.

Former Secretary of State George P. Schultz was spotted at the ballet, as was Ambassador of Monaco to the United States Gilles Noghès.