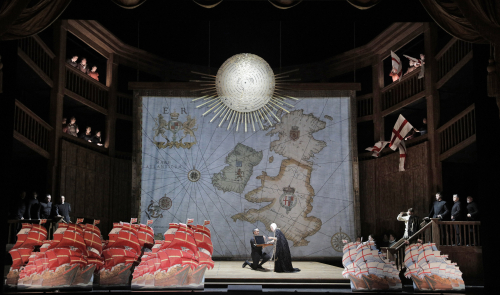 * Notes *
A magnificently cast Roberto Devereux (opening scene pictured left, photograph by Cory Weaver) is the second offering in San Francisco Opera's 96th season. Though somewhat marred by a tepid staging, the tragic opera by Donizetti is a fine vehicle for vocal fireworks and held together by a confident orchestra and chorus.

Maestro Riccardo Frizza had the orchestra well in hand, clear and synchronized. From the first notes, the sound was declarative and bright, but never overwhelmed the singers. Frizza was never in a rush but also did not drag in the least.

Stephen Lawless's production from the Canadian Opera Company is set in the Globe Theatre, in fact we see Shakespeare pop up out of a trunk during the overture, along with lots of explanatory notes on the supertitle screen setting the context for us about Queen Elizabeth's time. It was odd, given that the piece is not historically accurate, and it was a lot of reading to do before the singing even started. Then again, I am not much of a fan of Donizetti's music, the overture refers to "God Save The Queen," which of course sounds like "My Country, 'Tis of Thee" to us Americans, so a distraction was welcome enough.

There were some weird elements to the staging, for instance Anne Boleyn, Henry VIII, and a young Elizabeth appear in glass cases during the overture, Elizabeth thrashes around for a bit and then the cases move off the stage to be replaced by a new scenes. All of these were perfectly seamless, which made the set changes between actual scenes and acts all the more irritating. A red curtain came down as the stairways were moved or a bed was placed to indicate Sara's apartments while a note read "Please stay in your seats during this scene change" on the screen. This takes the audience out of the drama, giving them time to chat or look at their phones, and even though the changes were quick, the damage was done.

But the real reason for mounting this opera is certainly for the singers. Tenor Russell Thomas did not disappoint in the title role. His Act I "Nascondi, frena i palpiti" where Roberto Devereux denies loving anyone is convincing. He also sang "Come uno spirto angelico... Bagnato il sen di lagrime" with great beauty. I found the music here incongruously cheerful for the scene, in which Devereux is imprisoned in the Tower of London and awaiting death.

Mezzo-soprano Jamie Barton is the hapless Sara, beloved by Devereux and married off to the Duke of Nottingham through the machinations of Elizabeth I. Barton has a lovely, rich voice and she sings with utter ease. If memory serves, she nearly upstaged lead soprano Sondra Radvanovsky last time they sang together at San Francisco opera in Norma four years ago.

That was definitively untrue here. Radvanovsky is devastating as Elizabeth I, and it made you wonder why Donizetti didn't keep the title of the source text, Elisabeth d'Angleterre. Radvanovsky takes chances, her notes aren't perfectly clean and white, her voice crackles with emotion when necessary. Her voice is powerful and her rage is unmistakable. At times she seemed completely unhinged, yet she is able to show vulnerability, especially in the last scene.

* Tattling *
The opera was sparsely attended, at least in the balcony, quite undeserved given how strong the cast is. Standing room was even more empty than the night before, perhaps because rush tickets were available.

There many people using their devices in the upper balcony and more than one person was scolded by the ushers.