Porgy and Bess at Seattle Opera

* Notes *
Porgy and Bess (Mary Elizabeth Williams as Serena and Gordon Hawkins as Porgy pictured left, photograph by Elise Bakketun) had a sixth performance at Seattle Opera on Sunday afternoon. Chris Alexander's production is serviceable, though perhaps blunt. The set, from Michael Scott, is attractive, but does not facilitate scene changes. The music was often interrupted by applause, and a fidgety silence predominated during the short breaks between scenes. Christina Giannini's costumes were nice enough, but Bess' initial red dress was not particularly flattering in cut. Duane Schuler's lighting was simple and elegant. Kabby Mitchell III choreography looked wonderful on the dancers, and on most of the singers, especially Michael Redding and Jermaine Smith.

John DeMain held the orchestra together, though there were times when singers and musicians were not precisely together. The soli were all very clear, almost jarringly so. The singers were strong, even the small roles of Strawberry Woman (Ibidunni Ojikutu) and Crab Man (Ashley Faatoalia) were cast perfectly. The chorus sounded fine, and were only occasionally not tightly synchronized. Angel Blue (Clara) sang "Summertime" beautifully, her voice lucid and icy. Gwendolyn Brown's Maria was sympathetic and funny, and her diction is marvelous. Mary Elizabeth Williams was impressive as Serena, her "My Man's Gone Now" was incandescent. A couple of notes were slightly throaty, though this actually fits the aria well.

Michael Redding was a force as Crown, he had a lot of volume, yet good control. Jermaine Smith played Sportin' Life with the right amount of sneaky, greasy charm. He was occasionally overwhelmed by either the chorus or orchestra. Lisa Daltirus was a curious choice for Bess, though one should note that she has sung the role quite a lot. Daltirus is oddly devoid of sensuality, especially in the way she moves, and there were occasional unattractive gasps or catches at the bottom of her voice. She can sound perfectly clarion, and this came through in her reprisal of "Summertime." Gordon Hawkins (Porgy) had a better sense of his own body, and though his voice is perhaps not the richest, he sang well. His speaking voice is quite lovely and effective. Both he and Daltrius contributed to a particularly moving "Bess, You Is My Woman Now."

* Tattling *
The audience seemed unprepared for how long the first half of this opera was. The person next to me in CC 6 was the ideal standee: silent, attentive, and aware of the space around her. The couple standing at CC 8 and 9 were also pretty quiet, and kept their whispering to a minimum. A watch alarm was heard at 3pm, and a person in the last row of the orchestra did check her mobile phone during the pauses between scenes.

I must remember to use the NATO phonetic alphabet when spelling my surname, as there was all sorts of confusion at the box office when I picked up my ticket. Thankfully, the people at the box office are both polite and kind.

The Opera Standees Association held a small reception for Eric Owens yesterday evening in San Francisco. Owens is in the midst of having a great success in Porgy and Bess at San Francisco Opera, and the last performance is tomorrow. Despite this, and his recent Met debut, he remains refreshingly humble.

Eric discussed the excitement of live performance, how each night in a particular run will be different, and how having 3,000 people in the audience is part of it. He played Robert Levin's Curtis Commencement speech to us, which champions new music. We pontificated on which new operas might make it to the standard rep: Ainadamar, Dead Man Walking, and Little Women. A lively conversation about how it is more difficult to do a contemporary opera the second time, rather than the premiere, ensued.

We also got to hear about how Eric Owens became a singer, how he played oboe professionally but ended up at Temple University for voice as an undergraduate, and how he got into the Curtis Institute for Music for grad school after a year studying with Armen Boyajian. It is clear he is both tenacious and persistent. It was also particularly interesting to hear what music Owens loves, as he was a fan of opera before he ever thought he would be a singer himself. Charmingly enough, he did standing room at the Met as a teenager, first Tosca, then Götterdämmerung and Der Rosenkavalier.

* Notes *
Porgy and Bess had a strong opening last night at San Francisco Opera. Francesca Zambello's production works well, the set, from Peter J. Davison, is particularly striking. The scene changes were nearly flawless and Mark McCullough's lighting impeccable. Having the opera set in 1955 was not at all a distraction, though one is not sure the audience really noticed. Denni Sayers' choreography fit the singers, though the part at end of the hurricane scene seemed gratuitous.

John DeMain lead the orchestra skillfully, and there were only a few moments in which the singers and musicians were slightly off from each other. The singing was very uniform, everyone was fully engaged, and the chorus sounded lovely. Angel Blue (Clara) sang "Summertime" perfectly cleanly, though perhaps a bit coldly. This did make for a nice contrast when Laquita Mitchell (Bess) reprises this song in Part Two. Mitchell also has a clean, brilliant sound, though with a slight metallic harshness at the top. As Serena, Karen Slack was heartbreaking in "My Man's Gone Now."

Lester Lynch was terrifying as Crown, cruel, and with a powerful voice. Chauncey Packer danced his way through the role of Sportin' Life with aplomb, unctous and charming. His "It Ain't Necessarily So" with the chorus was impressive. Eric Owens (Porgy) had a promising role debut, though he did start off underpowered compared to the sopranos. Perhaps he was pacing himself for the end, which was incredible. The plaintiveness of "Bess, o where's my Bess?" built up to a glorious "Oh Lord, I'm on my way."

* Tattling *
The music is much more dissonant than one might expect, yet is put together deftly. The audience seemed absorbed by the work, there was only a bit of talking, but no electronic noise.

At intermission I had the pleasure of meeting Amanda Ameer, author of Life's a Pitch, who represents Eric Owens.

The panelists were asked to speak about the piece, their roles with in it, and the like. It was interesting to learn where the performers had sung before and how they felt about George Gershwin, authenticity, and the possible demeaning nature of the work. The cast seemed to have a strong commitment to this opera.

Maestro DeMain had much to say about Porgy and Bess, unsurprising given that he has been conducting the work for over thirty years. He compared this opera to Boris Godunov, as it too is a "folk opera," and Carmen, as both have dance rhythms throughout. DeMain also mentioned that Porgy and Bess is both a numbers opera and makes use of Leitmotivs.

The production was described by the choreographer, as she has worked on it since the beginning, with the Washington premiere. The stage director, Francesca Zambello, is concerned, once again, with making the work relevant to the contemporary audience. In this case, she has set the work in 1955, bringing us closer in time to the characters.

There were a few amusing moments during the evening. Chauncey Packer spoke about how after a performance someone told him "It's horrible what you did to that girl!" At another point Angel Blue explained that she could imagine singing Bess, as she had nothing in common with the character, to which someone on stage quipped "Not yet."

The soprano that created the role of Bess in the Gershwins' Porgy and Bess died last Friday.

David Gockley confirmed that Peter Grimes, which was to be part of the 2009-2010 season at San Francisco Opera, is likely to be one of the casualties of the economic downturn, just as La Cieca reported yesterday. Gockley also promised to add "no sniffling" to the list of admonitions printed in the program.

Much was said about the faltering economy. Porgy and Bess has been cast, though not all the contracts have been signed. Eric Owens will be Porgy and Laquita Mitchell sings Bess. The cinemacasts continue next Spring, with The Magic Flute, Lucia, Elixir, and La Bohème. As for next season, there will be a Richard Strauss opera conducted by Luisotti, but it is not Die Schweigsame Frau or Capriccio. (Gockley declined to name which opera it was but we've heard Salomé mentioned several times on different occasions.) The next world premiere is planned for 2011-2012.

Porgy and Bess as an Opera 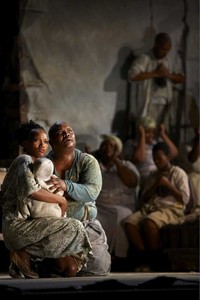 Cape Town Opera's Porgy and Bess is opening at Den Norske Opera in Oslo today, after a successful premiere at Deutsche Oper Berlin last month. The work was first performed as an opera in 1976 at Houston Grand Opera, and, at the moment, seems to be having a resurgance in popularity. There is a massive co-production that was just at Dallas Opera, that included Florida Grand Opera, Houston Grand Opera (1995), Los Angeles Opera, Opera Cleveland, San Diego Opera (1995), San Francisco Opera (1995), Seattle Opera (1995), and the Wang Center for the Performing Arts. Lyric Opera of Chicago is also performing a production originally created for Washington National Opera (2005) this November. This same production, by Francesca Zambello, will be at San Francisco Opera next summer, and was at Los Angeles Opera last year.

Many of the same singers come up in these productions, as the Gerswhins did not want the lead characters in black-face. Gordon Hawkins has sung Porgy in Washington, Dallas, and will share the role with Lester Lynch at the Lyric Opera. Kevin Short and Alfred Walker shared the role of Porgy in LA. Indira Mahajan has sung Bess in Washington, Los Angeles, and Dallas. Morenike Fadayomi was also Bess at Los Angeles Opera and will share the role with Lisa Daltirus in Chicago. To my knowledge, neither of the title roles has been cast in San Francisco, apparently Bess is a particular challenge, and I heard that Mahajan did not impress someone important during a Dallas performance last February.