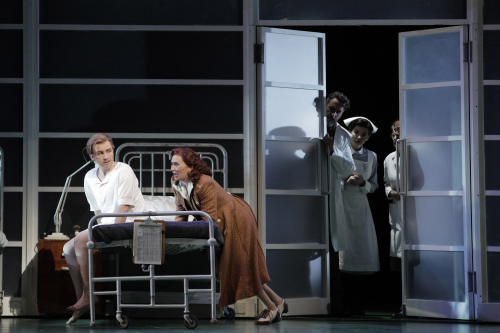 * Notes *
It is a joy to hear Händel's beautiful music live in San Francisco Opera's latest production (pictured left, photograph by Cory Weaver) of Orlando, which opened this afternoon. Set in the early autumn of 1940, in a hospital in West London, the staging turns out to be fairly dull though the singing is all very lovely.

The set is based on a real hospital from 1933, and has green floors and basically three different configurations. Mostly they simply turn the stage around. The scenes move quickly but don't have much visual impact, people aimlessly wander through. There are projections, but all are rather literal. We see a diamond ring and Angelica's eyes many times. For the most part it was tame, but I was outright annoyed by the bombing that took place at the end of Act II during Orlando's music. It didn't add anything to the drama and only got in the way of experiencing the opera.

Maestro Christopher Moulds seemed very relaxed in conducting the orchestra, it was all very pretty but perhaps could have used a bit more sharpness and precision. The singing too was attractive on all sides. In the title role, mezzo-soprano Sasha Cooke has some glorious high notes, very warm and legato. Some of her lower range was swallowed up by the orchestration, but she sounded great in her Act III aria "Gia l'ebro mia ciglio."

Both sopranos, Christina Gansch as Dorinda and Heidi Stober as Angelica, are splendid. Gansch has a tawny brightness while Stober is more icy. The contrast works well. Gansch's Act III aria about love ("Amore è qual vento") was particularly charming.

Bass-baritone Christian Van Horn is a powerful Zoroastro, while countertenor Aryeh Nussbaum Cohen is a tender Medoro. Nussbaum Cohen has a brilliant, strong, and smooth voice, one can hardly believe he is only twenty-five. His trio with the sopranos at the end of Act I ("Consolati o bella") was memorable as was his Act III aria "Vorrei poterti amar."

* Tattling *
I am just getting over a bad cough, and took something to suppress it just so I could make it through the opera along with six lozenges and some hot mint tea. While I managed to get through the three hours and twenty minutes without a coughing fit, I did notice a lot of unwrapping of drops and not a small amount of outright coughing.

I really enjoyed the standee to my right, he was adamant about shushing a man in front of us who was rifling through a bag during the overture, and he asked the usher and a latecomer to "please stop talking." He also tattled on a woman in front of him who was resting her bare feet on one of the chairs. I wish I had the wherewithal these days to confront people about their bad behavior, but sadly simply can't muster the energy for it!

* Notes *
Philharmonia Baroque Orchestra left San Francisco today to start a tour of summer festivals. The ensemble plays Händel's Orlando at the Ravinia Festival tomorrow, at Mostly Mozart on Saturday, and at Tanglewood next Tuesday. The semi-staged opera was performed by PBO in the Bay Area last year, with many of the same soloists.

PBO had a rehearsal in Berkeley yesterday, and the orchestra sounded bright and together under the direction of Maestro Nicholas McGegan. The cast shows a lot of promise. Wolf Matthias Friedrich (Zoroastro), Diana Moore (Medoro), and Dominique Labelle (Angelica) were consistent with their previous performances, and will undoubtedly do well. Yulia van Doren sang Dorinda very prettily. The Act I Scene 12 trio with van Doren, Moore, and Labelle was especially splendid. In the title role (written for Senesino), Clint van der Linde has his work cut out for him. Van der Linde sounded absolutely lovely in the Adagio part of Act II, Scene 11.

* Notes *
Philharmonia Baroque Orchestra opened a run of Händel's Orlando last night at Herbst Theatre in San Francisco. The opera was semi-staged, which made a rather silly opera perhaps even less convincing than it might have been. Production aside, the music was lovely. The orchestra sounded cohesive and jaunty under Nicholas McGegan. The strings were crisp and clean, and though the woodwinds were less than perfect in the first Sinfonia, they were otherwise very good. The horns fared pretty well in Act I, Scene 3's "Non fu già men forte Alcide," only a handful of errors were noted.

The cast was uniformly strong. Bass-baritone Wolf Matthias Friedrich (Zoroastro) did gasp slightly, but has a warm, rich tone. Susanne Rydén was very funny as Dorinda, and her crystalline voice was not without warmth. Sometimes I was not always sure she was hitting the middle of each note, especially at the beginning of Act I, when she chirped through "Quando spieghi i tuoi tormenti." The mezzo-soprano, Diana Moore, had impressive breath control, and her big aria in Act II as Medoro came off fantastically.

The fullness of Dominique Labelle's voice worked nicely for Angelica, she was never overwhelming and her vibrato was under control. One of the best moments of the opera was the trio at the end of Act I featured Labelle, Moore and Rydén. In the title-role, countertenor William Towers may have started off a bit thinly, but sang beautifully for the rest of the evening. His "Gia lo stringo, gia l'abbraccio" in Act III was wonderful.

* Tattling *
Aside from some whispering in the first act, the audience members around me on the right side of the orchestra level were attentive and quiet. There was noticeable audience attrition at the second intermission, as the performance was 3.5 hours long.