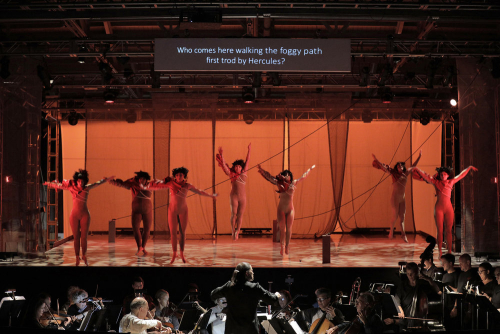 * Notes *
West Edge Opera presented Gluck's Orfeo ed Euridice last night at yet another new venue. Unfortunately, the space, once a repair facility for rail cars, is not acoustically suited for unamplified music.

In the past decade, West Edge Opera has performed everywhere from a high school theater in El Cerrito to a Bart station in Berkeley. The decrepit Oakland train station used in 2015 and 2016 was by far the most cool location, while last year's performances at a former Ford plant in Richmond had breathtaking views but was difficult to get to from San Francisco.

This year's venue, the Bridge Yard, has a fantastic views of the Bay Bridge, San Francisco, and the Port of Oakland. The industrial building dates from 1938, and has an edgy charm. However, it deadens sound, something about the shape of the space takes away from the resonances of both instruments and singers. Part of the problem is certainly the lack of back to the building, it is simply open. Another issue is the proximity to the highway, the white noise of vehicles takes the bite out of sounds.

Director KJ Dahlaw, a non-binary dance artist whose pronouns are "they" and "them," utilizes half a dozen dancers (pictured, photograph by Cory Weaver) in their production. The choreography reminded me of yoga combined with Graham technique. The dance costumes were beige unitards that could be festooned with tulle, ribbons, or sleeves and wig changes to switch characters from wedding celebrants to furies to blessed spirits. Mikoko Uesugi's minimal set is elegant, simply a few huge panels of transparent cloth that could be transformed with lighting.

Christine Brandes, best known as a soprano, took the helm of the orchestra. The proceedings were restrained and sedate, it is utterly beautiful music, but somehow the musicians seemed to lose momentum in Act II, and "Che farò senza Euridice" was particularly muddled. There were lovely moments, especially with the chorus, who stood in the pit and were able to unify the music. 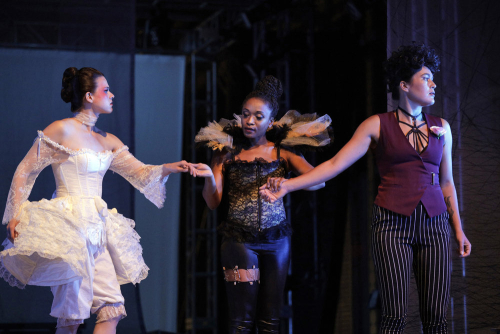 All three principals (Maria Valdes, Shawnette Sulker, and Nikola Printz pictured, photograph by Cory Weaver) are well known to Bay Area audiences. Soprano Shawnette Sulker cuts a dramatic figure as Amore in an asymmetrical tulle collar and lace corset. Her bright bird-like voice cuts through the best of the trio, but even she was dampened by the venue.

As Euridice, soprano Maria Valdes looked like a sweet doll. The brilliance of her sound was not apparent, but she did give a tender performance. Her interactions with mezzo-soprano Nikola Printz (Orfeo) were convincing. In this production Orfeo is non-binary, wearing both a gown with bow-tie and men's wear (a vest with pinstriped trousers) that plays up feminine curves. It isn't a stretch at all for opera, women play men all the time after all, and queering this story is perfectly reasonable and even anticlimactic. Printz has the stature for the role, being tall and athletic with a clear, strong voice. Some of her lower register was undercut by the challenging space, but I could always hear her.

* Tattling *
There was light talking at the beginning of the opera, a watch alarm at 9pm, and titters at the super titles. Mostly the audience members were very good, though I did not appreciate a loud crash from something dropping house right in the middle of Act II. 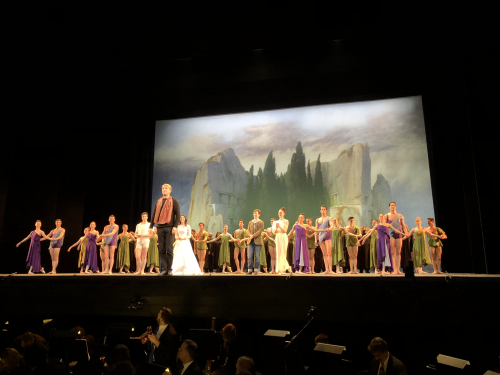 * Notes *
Choreographer John Neumeier's production of Orphée et Eurydice (final ovation pictured left) opened at Los Angeles Opera last week. Dance companies seem to love this opera by Gluck, and this co-production with Lyric Opera of Chicago and the Joffrey Ballet is no exception. The reworking of the libretto to be contemporary, with Orpheus as a choreographer and Eurydice a star dancer is compelling, but it seems pretty brutal for the lead soprano, it would be a rare thing indeed for an opera singer to also be a prima ballerina as well.

Joffrey Ballet is indeed impressive, the dancers mastery of various dance forms -- from classic to modern -- is obvious. There were only the tiniest sloppiness with some angles not being precisely the same from person to person. The male dancers that portrayed dark spirits in Act II (pictured below, photograph by Ken Howard) were especially effective. By the end of that act in fact, I felt as if I were floating on a cloud of beauty, it all did come together very well. 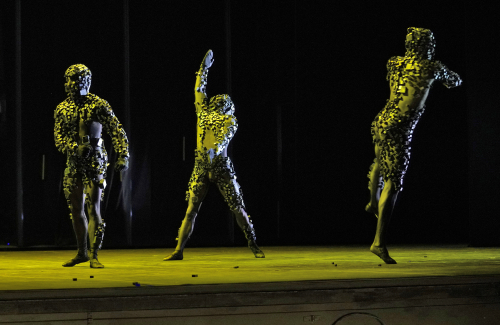 The singing was uniformly clear and beautiful, while the acting was more mixed. As Amour, soprano Liv Redpath is adorably cherubic with a lithe voice. Soprano Lisette Oropesa (Eurydice) has a lovely warmth and clarity. As athletic and graceful as she is, even when she walked barefoot it was conspicuous that she is not a dancer of the same caliber as the others on stage. Neumeier really put her on the spot, it doesn't seem fair to expect an amazing opera singer also fit in with professional dancers. On the other hand, Maxim Mironov was convincing as Orphée, he also sounds great, so open and even from top to bottom.

The chorus was very nice and cohesive as it sang in the pit with the orchestra. I enjoyed James Conlon's conducting, what it might have lacked in exactitude it made up for in liveliness.

* Tattling *
The women next to me in Row B Seats 14 and 15 were at the performance because they must have known one of the dancers, and consequently they didn't seem that interested in the music and occasionally spoke to each other at full volume even though they were a few feet from the Maestro. The man next to me in 12 either fell asleep or was concentrating very hard on the music with his eyes closed in Act II.

* Notes *
The Paris Opera Ballet performed Pina Bausch's arresting choreography of Orpheus und Eurydike as part the Lincoln Center Festival yesterday evening. The set, designed by Rolf Borzik, is sober, offset by his simple, often translucent costumes. The dancing was gorgeous. The movements were fluid, and had a lovely natural quality to them. One never felt that the dancers were simply following directions, all the motions seemed to flow out of their bodies with elegance.

The orchestra sounded together under conductor Thomas Hengelbrock. The oboe was especially lovely. The singers also did well. The chorus had many strong moments. Zoe Nicolaidou was a perfectly sprightly Amore. Yun Jung Choi (Eurydike) sounded pretty enough, and only had a few shrill moments. In the title role, Maria Riccarda Wessling had a nice clarity in her higher range, and some warmth. She had some frogginess a few of her lower notes.

* Tattling *
There was whispering from the woman in B 1 at the beginning of scenes, even when the dancers were performing. Said person was concerned about seeing the stage, and asked that the person in A 1 not lean into the aisle as he was blocking her view.

* Notes *
Orphée et Eurydice (William Burden as Orphée with the Furies pictured left, photograph by Elise Bakketun) opened at Seattle Opera on last night. Jose Maria Condemi's production provided a series of entertaining moments that did not quite cohere, but did not get in the way of the music. Phillip Lienau's set is clean, and the scene changes were smooth and quiet, enhanced by Connie Yun's lighting. The costumes, from Heidi Zamora, had a loose, relaxed look. Yannis Adoniou's choreography was dull, for example, the first ballet consisted of three dancers falling to the floor in unison and the third one was a pantomime foreshadowing the plot. The second ballet was silliest, the 7 dancers were Furies who drew their shirts over their heads. It seemed an untoward combination of Martha Graham's Lamentation (1930) and Merce Cunningham's Antic Meet (1958).

Conductor Gary Thor Wedow kept the orchestra moving, occasionally a bit a head of the singers. There were 2 or 3 minor intonation errors, but for the most part the orchestra had a nice, clear sound. The chorus sang well.

The principals were uniformly strong. Julianne Gearhart looked like she was on her way to Black Rock City as an Amore outfitted with pink ruffles, fairy wings, tall shiny boots, and a glittering cruiser. Her voice has a breathless, girlish quality to it. Davinia Rodríguez's voice is more piercing, and her Eurydice was convincing. Rodríguez pushed a little hard on some of the high notes at the beginning of Act II, Scene 2, but otherwise sounded fine. William Burden made for an incredible Orphée. His voice is sweet and bright, and his singing was quite moving. His "J'ai perdu mon Eurydice" was exquisite.

* Tattling *
Someone unwrapped something in cellophane during the overture. There was some whispering, particularly when no one was singing. No electronic noise was noted. I laughed a great deal during the second ballet, and tried to keep this as silent as possible.

Orfeo ed Euridice at the Met

* Notes *
The latest revival of the Metropolitan Opera's Orfeo ed Euridice (pictured left, © Marty Sohl/Metropolitan Opera) opened last night. The production, directed by Mark Morris, is busy. Done without an intermission, every second seemed full of movement. Allen Moyer's set opened, closed, shifted, and spun. Unfortunately it was rather loud, especially noticeable because the music is not. The staircase that descended and ascended could have illuminated the drama in some fashion, but simply created too much noise to be revealing. The lighting was simple and unobtrusive. The dancing had some elegant lines, and was rather humorous at times. Isaac Mizrahi's dress for Euridice was pleasant enough, as was the suit for Orfeo, and the subdued historical costumes of the chorus. Amor and most of the dancers had mundane street clothes on, they all seemed to be wearing separates. I did not understand the use of glittery cloth.

In his Met debut, Antony Walker drove the orchestra at a good clip. There were times when the musicians sound just on the edge of losing control and this was engaging. The chorus was ethereal and pretty. As Euridice, Kate Royal's Met debut revealed a voice with smooth edges, not terribly voluminous, but perfectly audible. Lisette Oropesa (Amor) seemed a bit compressed, especially in her entrance, as she was suspended from the ceiling. She did have moments of pure loveliness. David Daniels warbled as Orfeo, especially at first, but had pleasing warmth throughout. "Che farò" was beautiful.

* Tattling *
Standing room on the orchestra level was full of whispering, but most of it died down once much of the dancing was underway. After the performance, some female patrons were seen switch out their shoes in the orchestra lobby. Evidently someone did not find this dignified, commenting that it was a "show after the show."