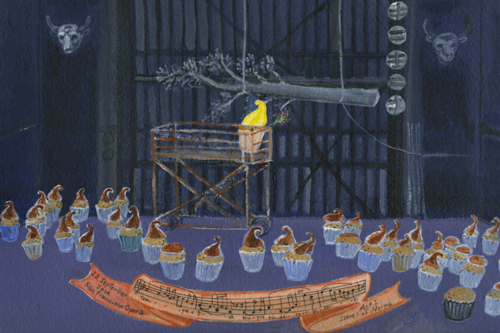 Act I Scene 1 of Norma takes place in a Gaulish forest at night. Here the Druids assemble and Norma (Sondra Radvanovsky) prays to the moon goddess for peace.

Mezzo-soprano Daveda Karanas, who was scheduled to appear at San Francisco Opera as Adalgisa in Norma this fall, has withdrawn from the production for personal reasons. She is to be replaced by Jamie Barton (pictured left) for five of the opera's seven performances. A casting update for the September 19 and 23 performances will be announced at a later date.

* Notes *
The Opernphrenologe went to Berlin for work, and managed to see this evening's performance of Norma at the Staatsoper. Annegret Ritzel's production was awful from the very beginning when the female chorus first pretended to be rocks and then proceded to crawl to a tree stump in the center. The choreography was poorly motivated, at one point in Act I, all of the members of the women's chorus took off their overshirts, showed off their arms, sang a bit, and then put their overshirts back on. Then in Act II, the men did essentially the same thing, but they just wore trouser straps. Katharina Eberstein's costumes were mostly of a dark palette, with the exception of the priestesses in white, who wore headdresses that were reminiscent of bloody tampons.

Paolo Arrivabeni's conducting was unimaginative, and the orchestra seemed did not seem engaged. The drums were off in the screeching overture. The Opernphrenologe particularly loathed soprano Silvana Dussmann in the title role, though she was much beloved by a majority of the audience. She sounded like cracked porcelain, and was flat a good deal of the time. Carmen Oprisanu, however, was pretty good as Adalgisa. Tenor Andrew Richards' voice proved to be nice and warm once he got over a rough start.

After tormenting the Opernphrenologe all about the details of the opera performance, I finally commented that she must have liked it. Apparently she did and was moved most by the narrative rather than Bellini's music.

* Tattling *
The house was filled with young people, and our Opernphrenologe was right next to a young lady (Seat 14 Row 3 in the middle of the second balcony) who insisted on instant messaging on her cellphone, until the man behind her told her to stop. After that she kept on fidgeting and whispering, but at least she moved elsewhere for the second half.

The Canadian Opera Company's production of Norma opened at San Francisco Opera last Sunday. The cast is strong, so it is certainly worth seeing. The production itself is uninspired. Remember those tiny houses you built in 3rd grade with your meticulously saved popsicle sticks? The set, designed by Allen Moyer, is reminiscent of these crafts, but on a larger scale. The haphazard walls made from wooden boards, along with the tree stumps, were apparently metaphor for how the Romans did not care about what the Druids held most dear. I wonder what the dirt-covered hems of Druidic costumes were a metaphor for, also note that the wooden structures were painted black at the bottom, but were light-colored at the top.

The costumes for the Druids were more bizarre than the Roman ones. The priestesses wore gauzy straightjackets that laced up the back and flowing gowns. Some of the Druid men wore loincloths in Act II, which was slightly startling, some put on robes later, others did not. The Romans wore short tunics with breastplates, military belts, and greaves.

Catherine Naglestad is a beautiful Norma, she sang well, though not without great effort. Mezzo-soprano Irina Mishura was more impressive as Adalgisa, her tone is sweet but her voice is powerful.

I spend much of the intermission speaking to the architect-coot from Napa, who introduced himself as Dave. We first met in the standing room line for Rodelinda last month, and he recognized me because of my absurd costume. Dave started going to San Francisco Opera in 1957. His first opera performance was Gounod's Faust, when he was around 20, at the Glimmerglass Opera Festival. He asked me if I was a music student, and when I had seen my first opera.