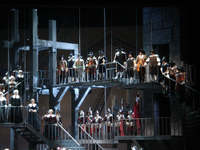 * Notes *
Bellini's last opera, I Puritani, had its Seattle Opera premiere at the beginning of the month, and Linda Brovsky's production is magnificent. The sets, the work of Robert A. Dahlstrom, look inspired by the Getty Center, as there are many steel staircases and landings. This kept the action in the vertical plane rather than the horizontal, so though the set was static, it was not dull. This also kept the staging simple and made the singers visible from different parts of the house. Peter Hall's sumptuous costumes were from the Met, though he modified them to work with the staging. The lighting designer, Thomas C. Hase, was tasteful in his approach, never harsh or overwhelming.

The horns were flat at first in the overture, and one note in the horn solo of Act II was sour, but they all managed to be in tune by the end. Otherwise the playing was good, the orchestra was usually with the singers and was not too loud. Also out of tune was Norah Amsellem (Elvira), from the very beginning I cringed at her voice during the off stage quartet (La luna, il sol, le stelle) in Act I. The arpeggios in first duet were poor, and the last note was quite unpleasant. Amsellem's voice is lucid and beautiful when she isn't flat, even resplendent, but she was often a half or quarter tone off. This was especially evident in Act III, when she sang "A una fonte afflitto e solo" and the tenor repeats these lines in "La mia canzon d'amore." She was most in tune for Act II, perhaps madness, at least at first, becomes her. Amsellem did look beautiful as Elvira and her acting was not bad.

On the other hand, Mariusz Kwiecien was wonderful in "Ah!, per sempre," his legato was gorgeous, and his singing as Riccardo was clearly distinct from his Don Giovanni of last season. In fact, I barely recognized him, his manner was so different and someone has finally figured out what to do with his hair. Kwiecien did rush during "Bel sogno beato" and was not with the orchestra, but sang beautifully in the rest of the opera. His singing in Act II with John Relyea was the highlight of the evening. Relyea was instantly recognizable from his gait and posture. His characterization of Giorgio wasn't terribly dissimilar from his Banquo or Garibaldo, as far as coloring, but he did sing well. Tenor Lawrence Brownlee did not have a convincing wig, but he was not disappointing as Arturo. His voice is bright and flexible, with a bit of strain at the top, but still lovely.

* Tattling *
The orchestra level was nearly all full, but before the performance began an usher kindly offered the standees seats as he explained that the opera was very long. Seattle Opera put two intermissions into this opera, which made for one 75 minute block, followed by 45 minutes and 35 minutes blocks that could have easily been combined.

There were no mobile phone rings, but there was one watch alarm with many beeps in succession during the Act II overture. Someone was making vocalizations on the orchestra level, I could not tell if they were singing along or just snoring. Plenty of talking, whispering, and coughing was observed, and a woman in Section 2 of the orchestra level, in Row BB Seat 6 both spoke and coughed a fair amount. I tried to look at her disdainfully when she stared at me during the Act III overture. I'm not sure why she was staring, given that she had to turn her head around to do this, and the light reflecting off her glasses made it very obvious that she was doing so.

* Notes *
A new co-production with the Norwegian Opera of Carmen opened at the Royal Opera House opened last month and runs until February 3, 2007. All the performances are sold out, but 67 tickets are held to be sold the day of the performance as day seats. Last Thursday I tried this, getting to the entrance situated under the covered arcade in the corner of Covent Garden Piazza at 7:15 in the morning. The queue was already 20 people long, but getting tickets wasn't a problem, we got bench seats in the Stalls Circle. The ticket seller seemed surprised and said it wasn't always so crowded.

The production, directed by Francesca Zambello, was not perfectly congruous. The costumes were traditional, but the set was just a few large walls placed at different angles for each act. There were props such as an orange tree and a statue of the Virgin Mary that were in keeping with the costumes but not the set. Also featured were an abundance of live animals, including a donkey, a horse, and chickens. Another crowd-pleaser was Arthur Pita's choreography in the form of acrobatics and dancing.

None of the singing was particularly good. Anna Caterina Antonacci had her Royal Opera House debut with the title role, which she is sharing with Marina Domashenko. Antonacci is a strong actress, she was sultry and a bit mean, perfect for the role. Her voice is nice within a certain range, but has some unpleasant qualities outside of that. She gasped a few times and was occasionally flat. I appreciated that this production had the castanets played by a percussionist in the pit, but it would have been nice if they had Carmen at least mime the playing instead of having her alternately stamp the rhythm in her feet or bang together mugs in her hands. Jonas Kaufmann was strained as Don José, his voice is small and slightly nasal. He was quite underpowered compared to Marco Berti, with whom he is sharing this role. Ildebrando D'Arcangelo looked uncomfortable as Escamillo, quite stiff. His voice sounds constrained somewhere in his throat, it has a husk-like feel. He sang half of "Toreador en Garde" on horseback, which was silly but the audience enjoyed it. Norah Amsellem was an insipid Micaëla, she was shrill, out of tune, had too much vibrato, and was even off from the music a few times.

* Tattling *
People talked during the overture, but were fairly quiet the rest of the time. There was some cellophane being unwrapped during Act I, which was hushed quite vigorously, and not by me for once.

Antonacci flashed her undergarments several times during the course of the opera, impressive given that her skirts were all ankle length.

The performance was only 3 hours and 10 minutes long with one intermission, even though they did the longer spoken dialogue version of the opera. They cut "A deux cuartos" from the beginning of Act IV, so that may have contributed to the brevity of the performance.

The joint San Diego Opera and Michigan Opera Theatre production of Les Pêcheurs de Perles might have been pleasant, despite its absurd Orientalist plot, unsynchronized dancing (courtesy of the San Francisco Ballet), and lurid set, but in the end it is Bizet who lets us down. One should not end one's opera by sending away the two lead singers, the tenor and soprano, leaving the mediocre baritone to mutter the few last lines. In this particular staging, the latter is loudly shot, but it hardly matters, there is no music to disturb.

Zandra Rhodes' stunningly bright set and costumes were amusing at best, and perhaps a bit hard on the eyes. Baritone William Dazeley was slightly reedy, but his duet with tenor Charles Castronovo in the first act was lovely. Soprano Norah Amsellem had a rich, full tone, she was definitely the best part of the whole show, and also doesn't look too bad in a sari, even one overwhelmingly yellow and pink.