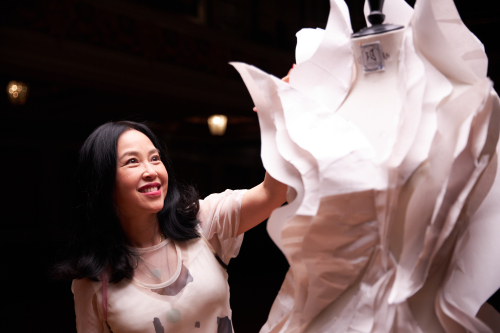 Couturière Colleen Quen (pictured left with her work, photograph by David Law) has collaborated with New Century Chamber Orchestra (NCCO) on a multimedia piece that debuts on Thursday, May 27 at 12pm.

The delightful and effusive Quen spoke to me on the phone last week from her atelier in San Francisco.

How did you get involved with this project with New Century Chamber Orchestra?
They reached out to me to ask if I was interested in collaborating with the orchestra. One of the violinists, Iris Stone, has been a client of mine. I like to keep unfolding as an artist, so this was a perfect opportunity. 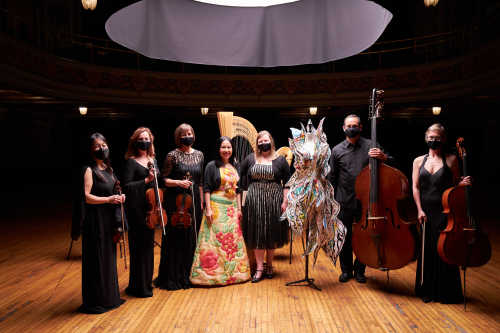 Tell me about your inspiration for the multimedia sculpture and how it came together.
(Executive Director) Richard Lonsdorf chose the Debussy for me. He just knew it was right for me, it is romantic and French, both of which I love. I create through paper first, and for this I put together the 90-piece sculptural couture creation in about 2 days. I went into the composer's world, cutting out shapes spontaneously. It was very meditative, translating the notes onto the dress form.

For the filming, I painted the paper pattern as the musicians played Danse sacrée et Danse profane. It felt like the musicians were wrapping their love around me and it was very healing. We've all been starved for togetherness in this pandemic, I feel.

How have you coped with the pandemic?
Covid has made an impact on me. I felt so suppressed as an artist, since my medium is human beings. I didn't design for about 6 months and all of my projects stopped, though I have continued teaching through Zoom. NCCO awakened me, the collaboration was a gift that I'm so grateful for.

I'm a fourth generation Chinese American from the Bay Area, so I was caught off-guard by the upsurge of hate crimes against Asians. Covid has made us so fearful of each other and all the more so for our Asian elders.

Based on your Instagram it looks like you've spent a lot of time hanging out with your super cute French bulldog Libai. Is he named after the poet?
Yes! My Frenchie has a Chinese name, it's true. 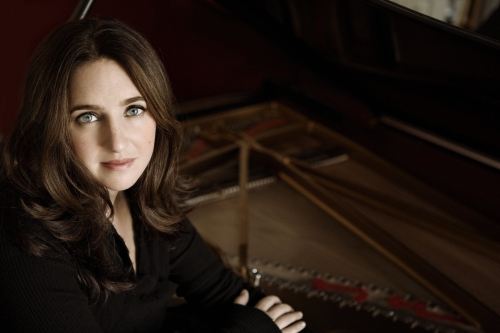 The ensemble seems equally at ease with the contemporary Glass as with the Bach Keyboard Concerto No. 7 in G Minor that opened the second half of this performance. The playing was together and smooth, with characteristic high energy throughout. The shifts from various tempi and dynamics are always perfectly clear.

The first half of the concerto featured Bryce David Dessner's Aheym, a piece from 2009 which has many emphatic arpeggios. Dessner is best known as one of the twin guitarists for indie rock band The National, and it was fun to hear his work sandwiched by a brightly played Purcell's Chacony in G Minor and a crisp rendering of Geminiani's Concerto Grosso No. 12 in D Minor, "La Folia."

Tattling *
Someone on the left side of the hall was desperately trying to open a lozenge during the Dessner, while a watch alarm rang four or five times on the right side during the Geminiani.

I was surprised that the only talking I heard during the performance was during the Glass, a bit of whispering behind me in Row H, perhaps Seats 102 and 104.

Peréz, dressed in a sparkly silver gown with matching heels, sang a limpid Vocalise by Rachmaninoff, every note vivid and beautifully colored. Her voice is exceedingly bright. The performance of the Letter Aria from Eugene Onegin was similarly evocative and NCCO sounded full and lush, especially for such a small string ensemble.

Lead by the inimitable Nadja Salerno-Sonnenberg, NCCO is a well-oiled machine that plays with a lot of fire. The concert also included Pärt's stately Trisagion, some Jennifer Hidgon pieces that went from dramatic to serene and back again, and Shostakovich's Elegy and Polka, the former played with elegant grace and the latter with sardonic verve. The encore of Schnittke's Polka was great fun.

* Tattling *
Lots of talking in the second half from the man in L 101.

After intermission came a lusty rendition of Schoenberg's Verklärte Nacht and Heidrich's entertaining Happy Birthday Variations. The musicians of NCCO always seem to be having a great time playing together and their joy was infectious.

* Tattling *
There much whispering in the second half of the performance, especially from near Row I Seats 107 to 111 on the orchestra level.

* Notes *
New Century Chamber Orchestra began the 2011-2012 season with a program entitled "Carmen Revisited," including works from Bloch, Mendelssohn, and Shchedrin. The first performance last night in Berkeley commenced with Bloch's Concerto Gross for String Orchestra with Piano Obbligato, the pianist in this case being Miles Graber. Nadja Salerno-Sonnenberg and the rest of the musicians sounded strong without being overly pretty. NCCO certainly has a lot of vigor, in any case. The second piece, Mendelssohn's Violin Concerto in D minor, featured NCCO'S former Music Director, Stuart Canin (pictured above, photograph courtesy of the San Francisco Chronicle). Canin's playing is perhaps imprecise, but his phrasing has its appeal. After the intermission came Shchedrin's Carmen Suite. Again, the ensemble played forcefully, and the principal second violinist even broke a string in the second movement. The musicians seemed to relish the fortissmo parts of the music.

* Tattling *
There was a lot of street noise during the second half of the performance. At some point an audience member in the balcony got fed up and closed one of the windows.

* Notes *
On Tuesday New Century Chamber Orchestra (pictured left, photograph by Kristen Loken Anstey) held a press luncheon in honor of the ensemble's 20th Anniversary Season. Executive Director Parker E. Monroe, Board President Paula Gambs, and Music Director Nadja Salerno-Sonnenberg all spoke about how things have been going for the ensemble of late. Ticket sales have been up, and the ensemble's first tour in February seemed successful. New Century goes on tour again in November.

This season's featured composer is Ellen Taaffe Zwilich, her "Prologue and Variations" is part of the programming for the December concerts, and NCCO will premiere a new work of hers in May 2012. It was also announced that Salerno-Sonnenberg has renewed her contract as music director.

* Tattling *
The press luncheon began with introductions around the room. Herr Feldheim had been speaking to one of NCCO's violinists after the open rehearsal, and arrived late. Salerno-Sonnenberg demanded to know who he was when he did join us.

* Notes *
New Century Chamber Orchestra ends the 2010-2011 season with a world premiere of Mark O'Connor's Elevations. The performance in Berkeley yesterday evening began with two Elgar pieces, the Larghetto from Serenade for Strings in E minor, Op. 20 and the Introduction and Allegro for Solo Quartet and Strings. The pieces sounded florid, and perhaps almost violently chaotic, but also showed some range of dynamics. Frank Bridge's Sir Roger de Coverly was a rather cute touch before the intermission. The piece from O'Connor seems based on a simple, short figure that is disguised in different manners, but repeats many times. It was played with great vigor, but oddly, my main impression was that this melody would make a good segue music on NPR. The places where Music Director and Concertmaster Nadja Salerno-Sonnenberg (pictured above) shone through were most flattering, she is persuasive, to say the least. The concert concluded with the droll Moz-art à la Haydn by Alfred Schnittke, and this showed the ensemble at its best, playful and wry.

* Tattling *
There was talking in the second half, especially during the Schnittke, even though we were warned the lights would be dimmed.

* Notes *
New Century Chamber Orchestra opened a series of performances entitled "Mastery of Schubert" in Berkeley yesterday evening. They began with Bach's Violin Concerto in E major, with NCCO's music director, Nadja Salerno-Sonnenberg, as soloist. Salerno-Sonnenberg has a very peculiar motor pattern, and seemed to be brimming with energy. The piece was played vibrantly, with dramatic contrasts in dynamics. This was followed by 4 Schubert Lieder arranged by Clarice Assad and sung by soprano Melody Moore. Moore sounded clear, her pure high notes are warm and unconstrained. It was especially interesting to compare the two settings of "An den Mond." The orchestra fell readily into the background. The performance ended with Mendelssohn's Octet in E-flat major, played by the 18 musicians present. The playing here was not overly romantic, in fact, lacking prettiness, but again, very driven. The first movement in particular had much fire, despite the heavy rain that was audible on the roof of First Congregational.

* Tattling *
There was minor whispering. An electronic device went off between the first two movements of the Bach. There was slight confusion during the Schubert, as the first piece was listed last in the program.

* Notes *
New Century Chamber Orchestra gave a series of performances featuring Russian composers. The first half of the evening began with Prokofiev's Visions Fugitives, with soloist Anne-Marie McDermott at the piano. The brief piano pieces were rather romantic and impressionistic, the string orchestra arrangement by Rudolf Barshai worked well. McDermott launched directly into Shostakovich's Piano Concerto No. 1 in C minor, with trumpet player Adam Luftman accompanying her along with NCCO. The Shostakovich was markedly more amusing than the Prokofiev. Both McDermott and Luftman played cleanly. The second half consisted entirely of Souvenir de Florence from Tchaikovsky. The piece was thoroughly enjoyable, the strong rhythmic patterns certainly held the attention.

* Tattling *
There was some whispering, and far too much applause between the movements of the last piece. The motor patterns of NCCO's music director, Nadja Salerno-Sonnenberg, are rather unusual, even a bit disquieting. One is impressed she can produce such sounds from her violin using the particular motions she does.