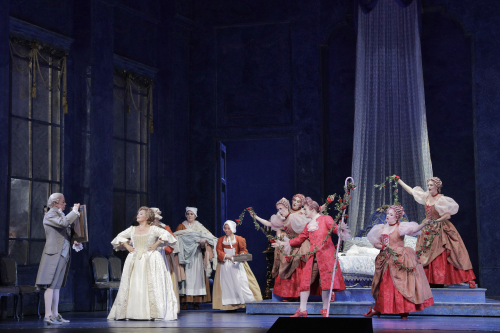 * Notes *
A very loud revival of Manon Lescaut opened at San Francisco Opera last night. All the singing was strong, and the orchestra sounded exuberant under the baton of former San Francisco Music Director Nicola Luisotti.

My main memory of this production way back in 2006 is of Karita Mattila in the title role doing the splits in a very blue room. Soprano Lianna Haroutounian (pictured in Act II, photograph by Cory Weaver) is a more convincing Manon, her lack of splits notwithstanding. Her voice is passionate, she has a tendency to be sharp, but it isn't much of an issue unless she's singing a duet. 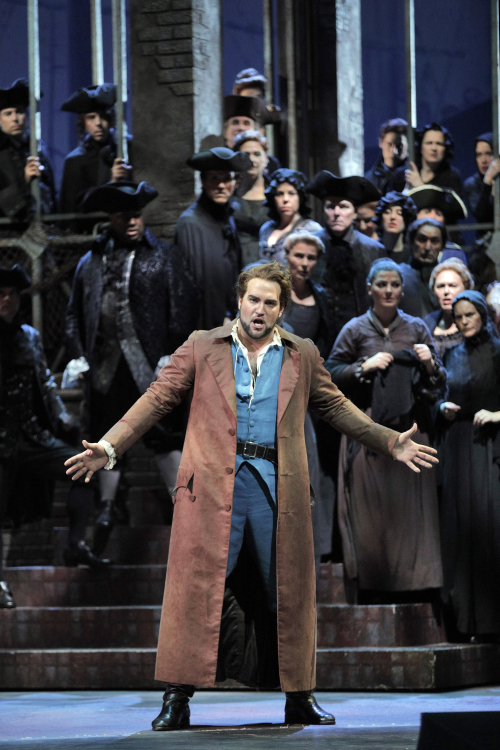 Tenor Brian Jagde (pictured in Act III, photograph by Cory Weaver) is a dashing Chevalier des Grieux, his powerful voice can always be heard over the very bold and propulsive sound of the orchestra. Baritone Anthony Clark Evans as Lescaut was a touch quiet in Act I, overwhelmed by both orchestra and chorus, but was certainly audible in the rest of the opera, while bass-baritone Philip Skinner is a vivid villain as Geronte de Revoir. The latter's sturdy voice and fine acting won him boos during the final ovation.

The production, designed by Frank Philipp Schlössmann and directed by Olivier Tambosi is attractive. This team also created recent productions of The Makropulos Case, Falstaff, and Jenůfa, which is abundantly clear in the lighting, colors (lots of blue and grey), and especially the rocky wasteland scene at the end. This last scene requires a long pause to set up, and the super-title admonition demanded we stay in our seats for the scene change. Much of the audience pulled out mobile phones, unable to wait the few minutes between acts. I did appreciate that the curtain was down for the intermezzo before Act III, it was lovely to be able to really concentrate on the orchestra without any distractions.

* Tattling *
After hearing this opera three times now, I must admit I still do not like it. I think it might have to do with the source material, I just do not like Manon, her frivolousness and faltering nature doesn't appeal to me somehow. Perhaps I will try again with the score and focus on the music. Tellingly, I woke up this morning with Engelbert Humperdinck's Hansel and Gretel still in my head, as I had watched a DVD of it with my son yesterday afternoon in preparation for the performance we are attending at San Francisco Opera next weekend.

The audience was sparse, I arrived a little bit before 7pm and got the thirteenth standing room ticket, and could have easily sat in a seat in the balcony. Because of this, there was very little to note as far as bad behavior.

* Notes *
The last opera of the year at San Francisco Opera will be Manon Lescaut this Sunday. Overall, this production was the best of the seven, because the cast is strong and the set design is neither distracting nor nonsensical. It is interesting to note that Carmen sold out for the last three performances, and the singers sharing the title role are both newcomers. Manon Lescaut was not completely full yesterday, nor is the final performance sold out, despite Karita Mattila. Perhaps this opera is too obscure, when I've mentioned it in passing, many people have not known of it, nor of Abbé Prévost's book.

I am quite curious to hear Karita Mattila sing in Wagner, I have only heard her sing music that I am not particularly interested in, Puccini this time and Janáček a few seasons ago. Her voice has such beauty and intensity. This time around I noticed that tenor Misha Didyk has a lot of vibrato, but not so much to ruin his intonation. He also sounds better when warm, his Act I performance is certainly not as good as in the others.

* Tattling *
Someone came to the stage when the curtain was supposed to rise, and he assured us that Karita was fine, but some orchestra members were stuck in Bay Bridge traffic. Subsequently, the curtain time was pushed back 20 minutes.

Because of the late start, there were no latecomers in the boxes. However, some girls decided to come into Box X toward the end of the intermezzo between Acts II and III. I was sitting at the back of the box as to not crowd anyone, and one of the girls sat directly in front of me and perched on the chair so that all I could see was the back of her head. To add injury to insult, the girls whispered throughout Act III, though they did leave after the act was finished.

* Notes *
Lyric Opera of Chicago's production of Manon Lescaut opened with a matinee performance yesterday. The production, designed by Frank Philipp Schlössmann, was completely traditional, rather unlike the 2004 Der Fliegende Holländer, which was the last Lyric production to come here.

This production, taken as a whole, has been my favorite thus far this season, and I cannot say it is because of Puccini's music, which I do not find particularly lyrical. Puccini's third opera is chock-full of different musical ideas, features a bizarrely disjointed plot, but somehow it came together beautifully. Donald Runnicles conducted well and with great sensitivity, he will be sorely missed when his tenure ends in 2009. Karita Mattila's voice was ravishing in the title role, so sweet and girlish at the beginning and filled with desperation at the end. Tenor Misha Didyk also sang well as Des Grieux, passionately and with enough volume and control. However, his diction was not always clear. John Hancock (Lescaut) and Eric Halfvarson (Geronte) both seemed competent, both vocally and dramatically.

The most obvious flaw in the production was the minuet, the music was there, but the dance seemed to consist of Mattila making curtsies as everyone else sits in a circle around her. Mattila looked awkward in the whole of Act II, she holds her head a bit too forward and her movements seemed somewhat erratic. Manon is supposed to be bored, but the fidgeting was excessive.

* Tattling *
Stanford professor Giancarlo Aquilanti gave a somewhat maniacal talk before the performance, declaring that Puccini was politically incorrect and that Des Grieux was a loser. Definitely worth hearing, Aquilanti certainly wasn't dull. He talked over most of his musical examples and seemed entirely smitten with Puccini.

The opera house looked completely full, and there were no latecomers of note, people were much more well-behaved than usual. The only annoyance of the performance were a couple who got up in-between Acts III and IV to stretch their legs, even though there was no intermission at this point. This should have been clear from the program and from the fact that Runnicles was still in the pit, baton aloft. Unfortunately, they didn't return to their seats before the music began again, and the ushers did not allow them to sit. Thus, we in standing room were left to hear them complain aloud during the music.

Much was made of the fragmentation as far as plot goes in regards to Puccini's libretto. Apparently at least seven people worked on it, which seems rather excessive, no? Also, a rather lot of comparisons were made between Puccini's work and Massanet's, and both were compared to the source text by Abbé Prévost.

The production of Manon Lescaut from Lyric Opera of Chicago opens this Sunday at 2pm and it shows 6 more times until December 10th.

* Tattling *
This last opera panel discussion of the year did not seem particularly well-attended, but everyone was rather well-behaved. There was a bit of hilarity regarding Wagner, when Tambosi suggested he was a mountain to get around or through or to subsume.

A few words of German also reared their heads, der Anlauf (from Tambosi) and das Fach (from Mattila).

We went to the Hungarian State Opera twice to see La Bohème and Manon Lescaut. They were having a Puccini Festival, so now I've seen more Puccini than anything else as far as opera goes. The opera house is so gorgeous, inside and out, though I've only been on the inside of five opera houses. The Markgräfliches Opernhaus in Bayreuth is the most fancy I've seen and the Wiener Volksoper the least.

In Vienna we went to see Mozart's Abduction from the Seraglio at the Volksoper, and the difference between Puccini and Mozart was marked. Mozart is just incredible, even difference between his stereotype of "oriental" music and Saint-Saëns's shows this. The romantics just don't compare, not even to me, a person who really doesn't have much musical sense one way or other. I'm visual to a fault. The set and costumes were not to my taste, the set consisted of a modern glass palace that spun around, and the costumes were retro 40's. However, the singing was marvelous and so was the acting.