Maestro Martyn Brabbins filled in for MTT, who is recovering from a heart surgery. Brabbins, the music director at English National Opera, is a charming presence, and the orchestra sparkled, only overwhelming the singers during the arithmetical section of the opera. 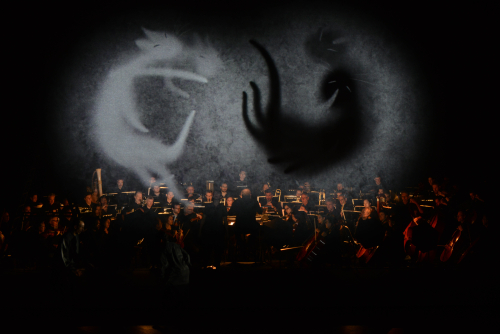 The opera has three sopranos and three mezzos (plus tenor, baritone, and bass), and it must be a casting challenge voices that are distinct from one another. In the lead role of L'enfant (The Child), mezzo-soprano Isabel Leonard is all petulance and brattiness at first, and the ethereal qualities of her instrument come out later.

Mezzo-soprano Ginger Costa Jackson (A Herdsman, The Chinese Cup, The White Cat) has a darker tone and more sensuality. I found her jarring as both The Chinese Cup and The White Cat, the former because of the mocking nonsense words meant to be Chinese, the latter because of the palpable violent eroticism. Mezzo-soprano Jennifer Johnson-Cano (Mama, The Dragonfly, The Squirrel) is warmer and richer.

Soprano Anna Christy has a bird-like brilliance as The Fire, The Princess, and The Nightingale, while sopranos Nikki Einfeld (The Bat, A Country Lass) and Marnie Breckenridge (The Bergère, The Screech-owl) are more icily penetrating.

Tenor Ben Jones was very funny as The Little Old Man, he comes out on stilts and a pointy hat while numbers bounce around in waves behind him, he was only a touch quiet. As The Tree Frog and The Teapot I had no trouble hearing him. Baritone Kelly Markgraf  gave evocative performances as both The Comtoise Clock and The Black Cat. Bass-baritone Michael Todd Simpson  was particularly poignant as The Tree, his mournful grievance against The Child is convincing. 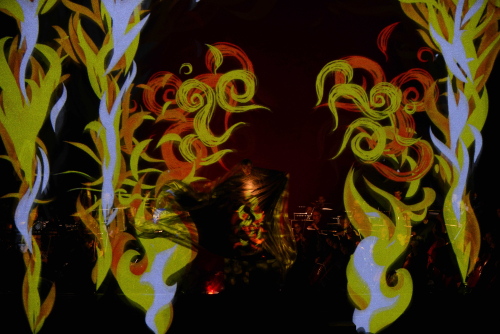 The set is essentially an downstage scrim with drolly drawn projections that the singers interact with, sort of a live action and cartoon mashup. The effect is charming, I really loved the scene with The Fire (Anna Christie pictured, photograph by Jean Pierre Maurin) and the aforementioned one with arithmetical demons.

Tattling *
There a lot of whispers. Someone with a child in Box D spoke quite a bit to her throughout the evening, though fairly quietly. The woman behind me in Row S had many audible reactions to the production at first, and I was glad she seemed so engaged with the performance.

The three young people in Row R Seats 17, 19, and 21 next to me chatted and looked at their phones, even taking photos during the performance. I think they must have been string players, they seemed more interested in the orchestra members than singers.

The boy next to me absolutely hated the pianist John Wilson who played pieces from Debussy's Children's Corner in the first half of the evening, which included several short French chamber music works from 1879 to 1915.  Wilson was restrained, his Serenade for the Doll had a delicacy to it to be sure. I just wish the person on my right hadn't talked so much during Ginger Costa-Jackson's rendition of "Noël des enfants qui n'ont plus de maisons" by Debussy. I was completely distracted already by Costa-Jackson's amazing biceps, and his comments about accompanist Peter Grunberg on the piano were not helpful for me.

* Notes *
Berkeley Opera is midway through a run of Béla Bartók's Bluebeard's Castle and Maurice Ravel's L'enfant et les sortilèges. The double bill makes for a short evening, a mere 2 hours and 10 minutes including an intermission. I was skeptical of the "unique multi-media staging," as both productions involved projections on an upstage screen. The Bartók used Naomie Kremer's videography, which at best looked like an animated version of Dave McKean's Sandman covers. At other times the images were a bit psychedelic, particularly when Door 4 is opened, the overlay of a human eye, flowers, and water. Door 7 looked like something out of a video game, Legend of Zelda, perhaps.

However, the music was wonderful. The orchestra, under the direction of Jonathan Khuner, sounded quite good. I did not like Kathleen Moss' voice at first, it was harsh and somewhat wobbly. But once she warmed up she sounded both crystalline and expressive. Paul Murray was more stoic as Bluebeard, but his singing toward the end of the opera was lovely.

The projections for L'enfant et les sortilèges were the work of Ariel Parkinson, and were more like digital backdrops rather than the videography of the previous piece. This complemented the both the dancing and the music. Misha Brooks was the petulant child, he acted well, but I was too distracted by the amplification to get an impression about his voice. The other singers sang from the sides of the theater and were represented on stage by either dancers or puppets. The 4 young dancers were clearly talented, and were well-synchronized.

Musically, I preferred Bartók to Ravel, but the latter had many more singers and because of the staging, the sound was unbalanced. Mezzo-soprano Paula Chacon sang especially well as the Chinese Cup and the Shepherd, she also sang the roles of Mama and the Dragonfly quite nicely. Baritone Anders Froehlich was hilarious as the Grandfather Clock.

* Tattling *
Yesterday's performance looked like it was sold-out. People were better behaved for the Bartók, but spoke during the Ravel.

Cass Mann took over the parts of the Shepherdess, the Bergère, the Owl, and the Bat for an indisposed Raiña Simons.

Plethora of Opera in the East Bay this Month

Also, Sacramento Opera's Tosca closes tonight. This weekend, instead of going to see any of these performances, I'll probably head off to Seattle to hear I Puritani. To add to the hilarity, please note who will be performing at the War Memorial Opera House this Saturday.

Nathan Gunn and William Burden will be singing in The Rape of Lucretia.