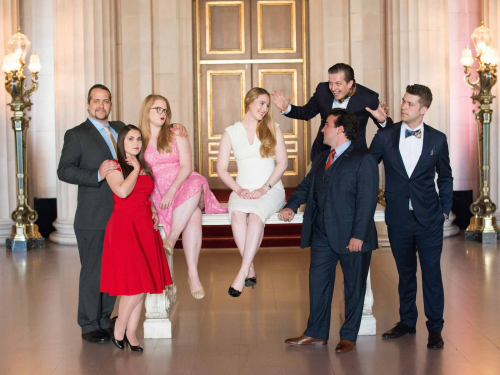 * Notes *
The second set of opera performances from the Merola Opera Program this year was Rossini's La Cenerentola at the San Francisco Conservatory of Music on August 3 and 5. The sugary sweet staging from Chuck Hudson showcased a plethora of fine young singers (pictured left, photograph by Kristen Loken) supported by conductor Mark Morash and a mostly competent orchestra.

The production featured three wardrobes moved around the stage by the male chorus, meant to look like the doors of various edifices. The costumes were slightly baffling, the male chorus members wore moto jeans splattered with paint and none of the women's clothing seemed to have sleeves. The choreography involved a lot of voguing.

But as usual for Merola, the voices were preeminent, and even the smallest roles are filled by very strong talents. Soprano Natalie Image, Clorinda, one of the step-sisters, has an especially gorgeous voice, and one would love to hear her sing more. The trio of bass-baritones were all strong. Szymon Wach sounded lovely as Alidoro, Christian Pursell made for a dashing, pretty voiced Dandini, and Andrew Hiers was a perfectly silly Don Magnifico.

Anthony Ciaramitaro has a sweet-toned tenor suited for Prince Ramiro, contrasting well with mezzo-soprano Samantha Hankey's dusky sound. Hankey has a fabulous physicality that Ciaramitaro obviously lacks, she moves in an elastic and adorable way that made the cloying title role much more sympathetic.

* Tattling *
I was so sad to learn that long-time opera supporter John Lindstrom died a few weeks before the performances, which were dedicated to his memory.

* Notes *
An adorable final performance of Rossini's La Cenerentola (Act I, Scene 1 pictured left; photograph by Cory Weaver) this season at San Francisco Opera was held last night. The cast was brimming with youthful energy. The male chorus sounded solid and executed the choreography with endearing aplomb. Zanda Švēde (Tisbe) and Maria Valdes (Clorinda) were suitably cloddish and funny. Christian Van Horn gave a dignified performance as Alidoro, sounding strong in "Là del ciel nell'arcano profondo." Carlos Chausson impressed as Don Magnifico, his parlando is excellent and his voice quite rich. Efraín Solís charmed as Dandini. René Barbera was a plaintive, earnest Don Ramiro. In the title role, Karine Deshayes sounded ethereal. There were times when it was difficult to hear her, but perhaps this was because of the set, which extends rather far upstage.

The orchestra gave an articulated and rather exciting performance as conducted by Maestro Jesús López-Cobos. There were times when chaos seemed imminent, as in the second act when the woodwinds were out of tune for a few seconds. But for the most part everyone stayed on track. Jean-Pierre Ponelle's production is winsome, the flat white and black set is sweet and the costumes are all rather cunning. The storm scene employs real water and a tiny dog. Gregory Fortner's direction was in keeping with the effervescence of the music.

* Tattling *
Those in Box P for this Thanksgiving's Eve performance were quiet and polite. There was much clatter of dishes from Box X.

Efraín Solís (pictured left) will sing Dandini in San Francisco Opera's Cenerentola, which runs from November 9 to 26, 2014. He replaces Fabio Capitanucci, who has withdrawn for health reasons.

This evening's performance of Rossini's La Cenerentola at the Bayerische Staatsoper seemed to be fraught with various issues. Petia Petrova, the mezzo set to sing the title role, was indisposed, and Anna Caterina Antonacci sang in her stead. Baritone Martin Gantner had hurt his foot recently, and was unable to run about as the choreography dictated.

Nonetheless, the performance came off rather well. Myron Romanul conducted the reduced orchestra well enough. The evil stepsisters, Clorinda and Tisbe, were both acted very well by sopranos Julia Rempe and Helena Jungwirth. Jungwirth's voice is even more quiet and shrill than Rempe's, but the role is small. Likewise, Bruno Pratico was a hilarious Don Magnifico, but his voice did not have much volume. The audience, of course, absolutely adored him. Martin Gantner seemed just fine as Dandini, I would have never guessed he was hurt, except for the announcement. His voice sounded better in Così as Guglielmo, but it is probably because of the part not the singing. Juan José Lopera had a sweet tenor good for the part of Don Ramiro, but he was a touch low on volume. Anna Caterina Antonacci's voice certainly was pretty compared to the sopranos, but she lacks control which lead to a few intonation problems. Her voice certainly was not one that felt effortless and free. The bass John Relyea as Alidoro was most impressive, his voice was both warm and clear, with excellent volume.

The set was charming, involving trompe l'oeil on curtains or panel in white and black. The effect was slightly Edward Gorey. There were essentially two sets, the Don Magifico household and the palace. Set changes happened behind various curtains and were more or less flawless. There was rain in Act II, Scene 7, as Ramiro and Dandini approach Don Magnifico's house for a second time. The scene was pretty and there was a chorus member walking a black poodle, which made the audience gasp.

The choreography was highly artificial, but very much with the music and suitable for the singers. Julia Rempe was especially amusing in the first scene when she is en pointe trying out ballet moves with little success.

The costumes were extremely pretty, gauzy and ribboned and Rococo. Jean-Pierre Ponnelle had a clear vision of what he wanted for staging, set, and costumes, and this was utterly apparent.

I had never seen a Rossini opera before, only heard a recording of Tancredi with Ewa Podles and Sumi Jo. Everyone knows a little bit of Guillaume Tell and Il barbiere di Siviglia, I suppose. The music was nice, very light and sweet. I liked "Una volta c'era un Re."