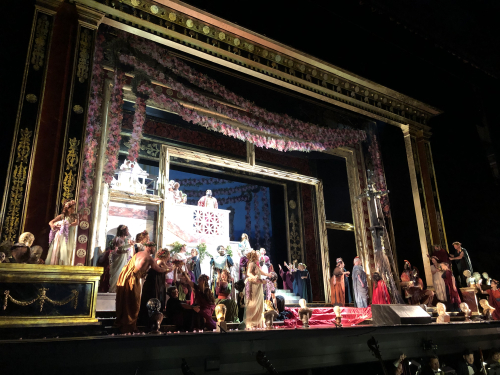 * Notes *
Mozart's La Clemenza di Tito is nearly through a run at Los Angeles Opera. The singing is top-notch with strong support from the orchestra and a sumptuous staging.

The new production, directed by Thaddeus Strassberger, who also designed the scenery, is recalls the Pre-Raphaelites, especially Frederic Leighton. There are many projections, and this helps to move the scenes along without fuss or noise. It was all very nice to look at though not necessarily that engaging, but certainly the direction did not get in the way of the music.

Maestro James Conlon kept the orchestra going with a lot of energy and a fair amount of crispness. The overture was lively and the brass clear. The clarinet has a lot of beautiful soli and did very well with all his exposed music. The middle of Act II lost a bit of decisiveness, but everything got back in focus by the end.

The cast is very fine indeed. Mezzo-soprano Taylor Raven (Annio) has a fresh sound. Both of her duets (one with Sesto and another with Servilia) in Act I were balanced. As Servilia, soprano Janai Brugger is sweet, with an airy breathiness. Soprano Guanqun Yu has some acting chops, she plays the villainess Vitellia well, and her change of heart at the end (“Non piu di fiori” ) seems sincere. She has a warm sound, with only a few slight gasps at first.

In the title role, tenor Russell Thomas has a lovely delicacy with his pianissimo parts. Coupled with his authoritativeness, he seemed ideal for the merciful Tito. Best of all though is mezzo-soprano Elizabeth DeShong as Sesto. Her voice is incandescent, and she was utterly riveting in “Parto, parto, ma tu ben mio” in Act I. Her Act II aria “Deh, per questo istante solo” was also a highlight of the evening. I felt lucky to hear DeShong sing this gorgeous music right in front of me.

Tattling *
I intentionally got a front row seat for this performance, as I find it easier to ignore the ill-behaved Los Angeles Opera audience when I can at least see the musicians and conductor without impediment. Of course, the woman in B 35 talked at full volume during the overture, and her husband dropped his phone toward the end of the act.

They also could not stop touching each other or themselves, for instance, the woman rubbed her tattooed arms for a long time at the beginning of Act II. Nonetheless, they were easy enough to ignore, as were the people behind me in Row C, who got into an amusing conversation about Chicago during intermission and may have whispered a bit during the performance.

My experience of this opera, which I have only heard once before, was enriched by having heard Cecilia Bartoli's Mozart Arias recording about a thousand times in the last three years because is my five-year old son's favorite CD.

* Notes *
A revival of Mozart's La Clemenza di Tito (Act II pictured left, photograph by Ken Howard/Metropolitan Opera) opened at the Metropolitan Opera a fortnight ago. Last Saturday I found myself in Family Circle Standing Room for the matinée performance, which was also broadcast live in HD. The cast included those with considerable talent, not least of which was mezzo-soprano Elīna Garanča, who sang the role of Sesto. Garanča's voice is pleasantly light and pretty, but well-supported.

Barbara Frittoli made for a comical Vitellia, her voice is somewhat shrill, but not inappropriate for the part, and kept her distinct from the other soprano. Kate Lindsey sang Annio with grace. Lucy Crowe sounded brilliant and sweet as Servilia. Only Giuseppe Filianoti (Tito) disappointed, he sounded a little raveled, and his notes were not precise. That said, the resonances of his voice had warmth, and he seemed less apt to crack than in other recent appearances.

The orchestra played somewhat ponderously under Harry Bicket, who kept time metronomically. The music is quite beautiful and does seem difficult. Bicket never overwhelmed the singers and seemed respectful of the score. The chorus was luminous and together.

Jean-Pierre Ponnelle's 1984 production is functional but still very descriptive. The set is elaborate, but the scene changes are made easily and do not create much noise.

* Tattling *
During Act II, a cellular phone rang when Vitellia confessed her involvement in the plot against Tito.