* Notes *
The final performance of the year for San Francisco Opera was Verdi's Otello last Wednesday. The orchestra continued to sound fine, especially the woodwinds. Luisotti's interpretation of the music came through, his choices in tempi and dynamics were strong. The chorus also did wonderfully. Vocally, the performance was consistent with the opening, Renée Tatum (Emilia) and Eric Halfvarson (Lodovico) stood out in the smaller roles. Beau Gibson was quiet as Cassio, and Marco Vratogna (Iago) was also a little thin vocally. Zvetelina Vassileva (Desdemona) had good volume but a great deal of vibrato in her highest notes. Her voice is, however, not unpleasant. Johan Botha sang beautifully, but his stage presence is lacking, and the audience openly laughed at him at the end of Act III when he sings "Quella vil cortigiana ch'è la sposa d'Otello." Perhaps the supertitles were to blame.

* Tattling *
The audience ill-behaved. For one thing, some of the technical staff were about, and I heard their talking aloud, and their walkie-talkies. Someone read The Hobbit during the overture of Act III, oblivious to the fact that he was blocking my light for reading the score. The same person rustled a plastic bag, but at least had the good sense to leave after Act III. Some else snored loudly on the middle bench of the back balcony throughout Act III, naturally the only one with light back there.

Opening of Otello at SF Opera

* Notes *
San Francisco Opera's last production of the year, Otello, opened this afternoon. Maestro Luisotti had the orchestra sounding richly fluent. The English horn, bassoon, and bass were particularly lovely. The brass instruments also had some good moments, though when they all played together there sometimes was a buzzing quality to the sound. The chorus sounded cohesive and forceful.

The production is perhaps deceptively simple, with a serviceable, three-tiered set designed by John Gunter. Various elements were employed to artfully transform the space as necessary, including Duane Schuler's lighting, not to mention the use of fire. It was a shame that much of the set was obscured if one happened to be too far back in the balcony.

Renée Tatum was a sympathetic Emilia, she was wonderful in the last act, her voice filled with anger and despair. Beau Gibson (Cassio) was plaintive, but his higher register was slightly quiet and strained. Marco Vratogna was brutish as Iago, at times growling. He could also be sickeningly sycophantic, in short, a fine villain. Vratogna was overwhelmed by the orchestra a few times, and was not as powerful as Eric Halfvarson (Lodovico). Zvetelina Vassileva's Desdemona was agreeable enough, though perhaps it would have been nicer had she not pulled at the back of her gown whilst her back was to the audience in Act III. She did sound very pretty in the last act, and tragic as well. Johan Botha proved to have the ability to sound sweet, especially in the duet with Vassileva that ends the first act. He has a couple of notes in the top of his tessitura that do not have the ease of the rest of his voice. However, he does have a great deal of volume that he is able to control quite beautifully.

* Tattling *
The audience was middling, we had a rough start in which someone's watch alarm just kept going off in Acts I and II. There was the loud sound of velcro being unfastened. There was tittering when the supertitles read "Acts 3 & 4" rather than the translation of the text being sung. Worst of all was the light applause after Desdemona went to bed, the clapping muffled the sound of the bass.

Aida at the Metropolitan Opera

* Notes *
A revival of Aida opened earlier this month at the Metropolitan Opera, and the Opera Tattler attended last Saturday's matinée at a score desk. The orchestra sounded tastefully restrained under Daniele Gatti, but not without emotion. The tempi and the dynamic nuances were unmistakable, and the playing was fairly clean and rarely overwhelmed the singers. The chorus was very much in unison, synchronized with each other and the orchestra.

Stefan Kocán sounded both creaky and shaky as Il Re, whereas Carlo Guelfi (Amonasro) was much more authoritative and commanding. Johan Botha's hefty voice is not particularly sweet, and his attempts at dolce and dolcissimo were not exactly on the mark. As Radamès, Botha was able to make distinctions in the dynamics, yet be heard. Dolora Zajick (Amneris) was cold, especially at first, but her "L'aborrita rivale a me sfuggia" was incredible. In the title role, Violeta Urmana had a range of expression in her voice, she could sound completely insane or absolutely delicate. The chorus and the three leads came together beautifully for "Immenso Ftha" at the very end.

* Tattling *
The seating on the sides of the Family Circle confused more than one person, and I was asked more than once if I was in a given person's seat. I tried my best to explain that I was at a score desk, and that it was unlikely that he or she would want to sit where the stage could not be seen anyway. There was a minor altercation between a young lady and an elderly one, it seems that people can be quite cantankerous about the seating.

There was lots and lot of applause at the beginning of the Triumphal March, perhaps because of the horses used in this production. One is tempted to see The Met: Live in HD broadcast of Aida this Saturday. 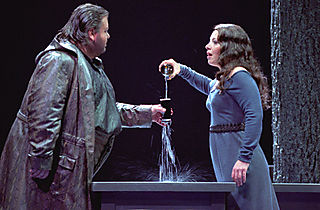