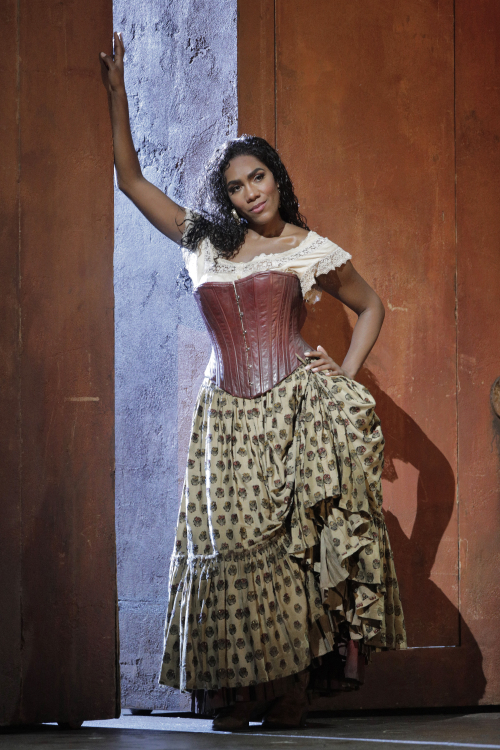 * Notes *
"Enjoy your hundredth Carmen!" teased my husband as I left for the opening of the latest production of this opera at San Francisco Opera last night. Quite an exaggeration, at best I've seen this opera twenty-five times, though I have seen this staging by Francesca Zambello way back in 2007 at Royal Opera, Covent Garden in London.

As it turns out, the performance was enjoyable. The playing was lovely, there was lots of good singing, and the production is attractive and sleek. I very much remembered the warm orange-reds of the stage and the orange tree in the middle of the stage in Act I. The set is efficient, there's no dead time in-between acts, and the performance clocks in under three hours since is only one intermission and cuts to the dialogue.

I always like Zambello's humanistic details, as with Captain Zuniga's struggle to get free when he is bound at the end of Act II and the possible observers to Carmen's tragic end up at the top of the arena. It was clear she was able to engage the audience.

Maestro James Gaffigan conducted a sprightly orchestra. The overture had a fine transparency. There were brief unfocused moments, as when the children's chorus entered or in the smugglers quintet in Act II. However, the many soli throughout the piece were all very nice, particularly the clarinet solo at the beginning of the last act.

The cast is youthful and attractive. The Adlers all were great, I especially liked mezzo Ashley Dixon and soprano Natalie Image as Mercédès and Frasquita, they are well matched and charming.

Bridges is remarkably consistent, her voice had only the slightest few catches at first. Otherwise she gave a strong, vital performance. Though her dancing lacks verve, she moves with a lank grace, and her Carmen is robust. Her Don José, tenor Matthew Polenzani, has a depth of emotional range that is palpable in his voice. In his last aria, he moves from imploring to cajoling to demanding, every phrase with a different color with an immediacy that doesn't require knowledge of French to understand.

* Tattling *
This is a great first opera, and I hope the production brings out lots of new people, as it seems to have so far. The only problem with this is there were quite a lot of whispering and phone screens out during the music at yesterday's opening, so you won't see me at Carmen again this summer.

* Notes *
James Gaffigan is conducting San Francisco Symphony in a program of Haydn, Thomas Adès, and Mozart this week. Gaffigan is a tiny sprite of a person, brimming with energy from the beginning in the Allegro assai con brio of Haydn's Symphony No. 52 in C minor. The woodwinds sounded slightly squeaky in their entrance for the Andante, and the horns were not clear, though the playing improved as the movement progressed. The strings were a little sloppy in the third movement, a minuet. The finale was oddly not very presto, it was not particularly played particularly fast, though vigorously.

Adès' Violin Concerto (Concentric Paths), Opus 24 has an outer space sensibility and is oddly tactile. I found some of the music rather evocative, though for the most part it seemed both difficult to produce and to listen to. The syncopation at the beginning of the third movement was perhaps the least baffling. The soloist, pert violinist Leila Josefowicz, certainly seemed on the ball and very focused.

The concert ended a delightful rendition of Mozart's Symphony No. 39 in E-flat Major. The flute and clarinets sounded lovely in the Andante con moto, and the Allegro was played with particular zest.

* Tattling *
There were some vague murmurs from the audience, but hardly any other noise.

Gaffigan and Josefowicz answered questions during the post-concert Off the Podium talk. The former is articulate and funny, the latter is endearingly awkward. Josefowicz even good-naturedly explained where she had gotten her striking outfit for the performance.

* Notes *
James Gaffigan conducted San Francisco Symphony in a program of Russian music last weekend. The evening began with Tchaikovsky, first his Voyevoda, which was rather incidental, but played well, and then his Violin Concerto. The soloist in the latter was the famed Hilary Hahn, and she could be both ferociously aggressive and delicately restrained as the music dictated. Her style was not as lush as it could have been for Romantic music, but her technique was flawless.

After the intermission came Glinka's Kamarinskaya, a perfectly delightful piece. The concert ended with Shostakovich's rather bombastic Symphony No. 1 in F minor, Op. 10. Both were played with little subtlety, but much vigor.

* Tattling *
People spoke during the music as usual. I was told that people were ill-behaved during the Violin Concerto, phone usage was mentioned, and the audience applauded once between movements.

It was an amusing evening, as evidenced here at sfmike's Civic Center.