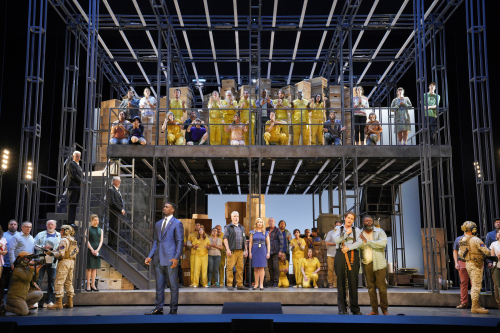 Matthew Ozawa's contemporary production features a startlingly spare set that spins to reveal cages full of people or solitary dungeons as the opera requires. I found the brutality of the layered bars weirdly compelling, especially since the set was also used for the drive-in Barber of Seville up in Marin earlier in the year. It was so different, completely transformed in the space of the War Memorial stage. The set used some creepy projections, mostly of Elza van den Heever's face (though the back of her head is projected before the opera begins), but did not simply rely on video to set the scene.

The orchestra was not always perfectly together, the first note from the brass section was sour, but Maestra Kim draws interesting textures out of the musicians and there were exquisite moments to be sure. John Pearson did a fine job playing the offstage trumpet in Act II. The ensembles were also particularly lovely, and the principal singers are beautifully cast. The chorus sounded strong and cohesive.

Soprano Anne-Marie MacIntosh is a sweet and chirpy Marzelline, her pretty tones very distinct from our lead soprano in the title role. Likewise bass James Creswell (Rocco) sounded so different from bass-baritone Greer Grimsley (Don Pizarro). Creswell is endearing, his voice warm and so human. Grimsley in contrast has less prettiness, which suits his role as villian. 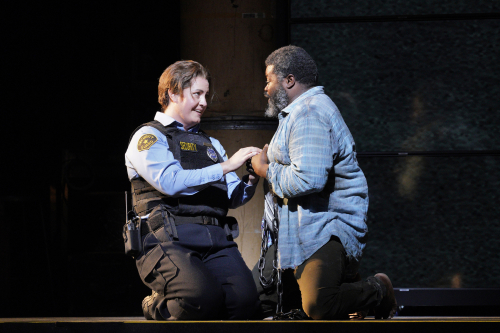 Tenor Russell Thomas seemed ideal as Florestan, his voice is so expressive. No less riveting is soprano Elza van den Heever, and her duet with Thomas (pictured, photograph by Cory Weaver), "O namenlose Freude!" was moving. Van den Heever has a lot of power and an icy clarity that somehow is not harsh. Her Act I aria "Komm, Hoffnung, lass den letzten Stern" got a huge response from the audience, and for good reason.

* Tattling *
I brought my good friend Axel Feldheim to this performance, apparently I haven't seen him in person for 586 days. He noted it was very odd to be seated next to me in this house, since we usually are in standing room.

The new seats are more obvious on the Orchestra Level, they have staggered the seats better, though there was no one seated in front of us in Row T.

Audience members around us were very good about keeping their masks on as requested. I did hear a phone alert of some kind as Rocco was singing in Act I.

Nathan Gunn and William Burden will be singing in The Rape of Lucretia.

Francesco Cavalli's La Calisto looks like one of the only Baroque options for opera on the West Coast next season.

* Notes *
Peter Mussbach's production of Fidelio, which premiered at Bayerische Staatsoper in 1999, is infuriating and yet strangely dull. The set is boring, despite the many scene changes. It was also rather loud, the scrims made all sorts of sounds as they banged against the stage and a certain metal door squealed when opened or closed. There were bizarre choices of when have the curtain down, as in the middle "O welche Lust" and during the Overture to Leonore No. 3, which was placed, as it sometimes is, between Florestan and Leonore's duet and "Heil sei dem Tag!" The choreography was simply stupid, why have Marzelline spin around in joy and then grab the wall or have everyone space themselves neatly like sculptures on a staircase?

The costumes, by Andrea Schmidt-Futterer, are likewise unexciting, lots of white and grey, though at some point Jaquino wore a skirt for just one scene. Certainly the most annoying part of the production is Konrad Lindenberg's lighting, or rather, lack thereof. The faces of the singers were perpetually in shadow, which dampened their dramatic force. Ridiculously, the rest of the stage was lit well, so one could see a staircase, or a heater, or a pile of dirt perfectly clearly.

Christof Prick's conducting was not inspired, the horns sounded off in the overture of Act I, and generally it seemed somewhat slow. The chorus sounded rather strange in the last scene, for they were placed in rows beneath the principal singers. Waltraud Meier was at least reasonable visually in the title role, but vocally she was brittle and out of tune. Robert Dean Smith was somewhat reedy as Florestan. The rest of the cast was fine, certainly best was René Pape's Rocco. His voice has good volume but is also nuanced. Martin Gantner sang the small role of Don Fernando, and as usual was not unpleasant.

* Tattling *
The audience distinctly less well-behaved than at Parsifal, though, at least, there was no late seating. There was whispering throughout, a chief offender on the orchestra level was in Row 17 Seat 696. This white-haired fellow also turned some sort of device on during the overture, for his face was bathed in a blue light for a few seconds. A person to his left peered over at him, confused by the visual disturbance. There were also two beeps during Act I, at least one was during an interlude in which Florestan and Leonore's voices are heard, but there is no music.

San Francisco Opera's revival of Fidelio opened last night. The production is directed by Michael Hampe and designed by John Gunter. The set is clever, with floors that lift up, and walls that can be moved aside. This facilitates scene changes, which went seamlessly throughout. The contrast of the openness in the final scene and the rest of the opera was rather deft. The set and costumes were both kept in 19th century style, no fedoras, no trench coats. The only noticeable flaw in the staging was the timing of the curtain, which came down before the music ended in both acts, causing the audience to clap before the music was finished.

The singing was solid with the exception of tenor Thomas Moser as Florestan. Moser's voice is a bit thin and reedy, especially in his upper range. At the end of his sole aria in the beginning of Act II he was simply shrieking. Soprano Christine Brewer was not visually convincing as Leonora, but when she sang, her lovely warm voice fit the role very well. The other roles were cast appropriately: Mathias Zachariassen (Jacquino), Greta Feeney (Marzelline), and Arthur Woodley (Rocco) all sang and acted well.

John Pearson played the Trompetenfanfare in Act II beautifully, it was the very sound of salvation.

Fidelio in a Small Electronic Box

So in the last week of December, I finally watched a television program in its entirety for the first time in seven years. It was a broadcast of the Metropolitan Opera's production of Fidelio. I suspect that part of the reason I do not watch television is because I have no idea what is on and at what time. Some solicitor for the Met called me on a rare day where I actually answered the phone and asked for a donation for the television broadcast, and I was, of course, compelled to actually send them money. But I decided that it might be nice to see this program, if I could figure out the channel and time. After much deliberation, it was possible.

Leonora was sung by Karita Mattila, who I saw recently as the lead in Kat'a Kabanova. Her voice is beautiful, and it had a damp sweetness in Janacek, but it is surprisingly strong, and she was able to sing Beethoven well also. Florestan was sung by Ben Heppner, who is supposed to be one of the greatest tenors at the moment, and he was quite good, a nice rich voice, but I would like to hear him in person. Jennifer Welch-Babidge as Marzelline was still birdlike sweet, and her acting is not bad and her German diction is pretty good. René Pape was good as Rocco, I had heard him before as an Old Hebrew in Samson et Dalila, but he didn’t make much of an impression then, since Olga Borodina was so incredible as Dalila. Falk Struckmann was an adequately evil Pizarro.

The production had its good points, the choreography was pretty good, though I was disoriented with how the camera moved around, as it was a television broadcast, so I’m not sure I could experience the staging exactly properly. As an aside, I found it strange to be looking at James Levine conducting from what would be an orchestra member's point of view. The set was ugly, very modern, but convincing.

The music was wonderful, and I must remember to look for a good recording of it.