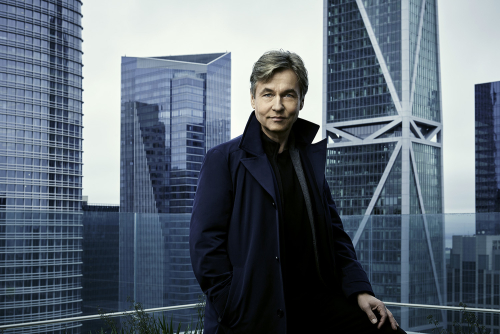 * Notes *
Esa-Pekka Salonen and the Philharmonia Orchestra (pictured left, photograph by Peg Skorpinski) stopped at Cal Performances this weekend as part of a US tour. Last night's program was a semi-staged version of Wozzeck. The lack of set and costumes allowed the music to take precedence, and the drama of this piece remained vivid and clear.

Joshua Ellicott (Andres) sang prettily, while Hubert Francis (the Drum-Major) was strong. Tijl Faveyts was a creepy doctor, his voice has a dryness that makes for a good contrast with the other low voices. He did have a tendency to blend in with the more highly orchestrated parts of the music. Peter Hoare's Captain is mocking and bright.

Angela Denoke has a sound few rough or sharp edges, yet was able to faithfully portray Marie's anguish. Johan Reuter made for a sympathetic Wozzeck, piteous and crazed. His voice is warm.

* Tattling *
There was some light talking from long-time patrons in the orchestra section. An iPhone (Apple's personal assistant application) was heard when the Idiot sings "Lustig, lustig...aber es riecht." Someone's phone rang when Wozzeck sang about death in the last act.

* Notes *
Over the weekend Esa-Pekka Salonen conducted Los Angeles Philharmonic in the world premiere of Shostakovich's Prologue to Orango. The piece was orchestrated by Gerard McBurney, based on surviving piano sketches. There was relatively little singing in the 40 minutes of music, as the 11 parts included an overture and three dances. Some of the singers were difficult to hear. The Entertainer, bass-baritone Ryan McKinny, blended into the sound of the large orchestra. Timur Bekbosunov (Paul Mâche) sang to Salonen, instead of to us. While humorous, this did not serve the music well. Yulia Van Doren was convincing as Susanna, and her vibrato seemed appropriate and controlled. Michael Fabiano sounded sweet and sufficiently loud as the Zoologist. Eugene Brancoveanu gave a committed performance in the title role. Though he sang rather little, it was obvious how beautiful his voice is.

The concepts behind Peter Sellars' staging looked like they had been pulled together in less than five minutes. We were shown images of Occupy Wall Street, a Rhesus monkey with pins in its skull, fighter planes, citrus fruits, and so on and so forth. Members of the chorus (the Los Angeles Master Chorale) were dressed in orange, disregarding the fact that the words orange and orangutan are not related. The fruit (and color) are from Sanskrit via Arabic and the first half of the animal name comes from Malay for "man." There were moments of the production that were interesting, especially when Orango jumps from his pedestal and attacks Susanna, who was seated in the first row of the Orchestra Level. Overall the proceedings were not cohesive, and a concert version of the work would have been less insulting to the intelligence of even this audience.

The second half of the evening was devoted to Shostakovich's Symphony No. 4. Salonen made sharp distinctions between the parts of the piece, but kept the music moving. The differences in tempi and volume were all clear. The orchestra did sound a bit muddy, but there were no egregious errors. The symphony ended gorgeously, melting into silence.

* Tattling *
The audience in the terrace was appallingly ill-behaved. Of 10 people in our immediate vicinity, 9 spoke during the music. More than one person fell asleep during the second piece. My companion tapped the knee of someone snoring in Row P to wake him up, and the offending person was irate, asking the person with him repeatedly if he had been making noise. After the performance there was rather ridiculous confrontation between awakener and woken.

From the House of the Dead at the Met

* Notes *
Leoš Janáček's final opera, Z Mrtvého Domu (From the House of the Dead) had a third performance at the Met last Saturday evening. The production marked the debuts of both conductor Esa-Pekka Salonen and director Patrice Chéreau in this house. The austere staging featured a monolithic grey set from Richard Peduzzi, yet was not static as there was much movement of people and stage elements, not to mention some startling effects with massive amounts of paper. The incorporation of the supertitles into the set was cunning, though unfortunately prone to technical difficulties, in this case an error message was displayed prominently at the end of the opera. Also, the choreography could be rather too loud, a distraction from the music.

Salonen had the orchestra under control, producing a beautiful sound that supported the singers. There were only a few harsh, muddy moments in the brass. The ensemble cast was well-rounded. Tenors Stefan Margita (Luka/Filka Morozov) and Kurt Streit (Skuratov) played off each other at the end of Act I, both have fine, but distinct, voices. Streit sang quite mournfully in Act II, with good volume and warmth. In Act III, baritone Peter Mattei portrayed Shishkov with conviction, his desperation and anguish were evident.

* Tattling *
The back of the Family Circle had rows of empty seats, and by the time the music started, only two people were in standing room.

Posted at 06:46 AM in Esa-Pekka Salonen, From the House of the Dead, Kurt Streit, Opera Review, The Metropolitan Opera | Permalink | Comments (10)

* Notes *
Esa-Pekka Salonen is currently conducting LA Phil in a program which includes his own Violin Concerto, Ligeti's Clocks and Clouds, and Beethoven's Symphony No. 5. Today's 11am performance was quite packed, since it is a part of a three-week celebration that marks the end of Salonen's tenure as Music Director of the Los Angeles Philharmonic. The festivities this morning started with a short film on Salonen's career in LA, followed by the Ligeti. Clocks and Clouds had a particular sort sustained droning, a pretty shimmering sound. The piece seems scored with female voices instead of violins, and the ghostly sounds the women of the Los Angeles Master Chorale produced were absolutely lovely. At other times they sounded like a flock of unidentifiable beasts, each intoning calls to one another. The effect was strangely arresting.

The soloist for the Salonen, Leila Josefowicz, appeared grounded and played with great intensity. The first movement had a folkish aspect, but with a certain etherealness as well. Movement III - Pulse II was the most fun, it involves a drum kit and a good deal of flirtiness. In contrast, the ending was rather forlorn.

Beethoven's 5th was played with relative restraint, without unnecessary bombast. The orchestra sounded bright here, and Salonen sense of phrasing comes out distinctly. The horns never blared, and only had a few brief moments of wooliness. The woodwinds did have a few seconds of incohesiveness in the slow movement. The last movement was suitably triumphant.

* Tattling *
After a five hour drive to get to this performance, the box office could not find my ticket. Apparently I need use the NATO phonetic alphabet when spelling out my name over the phone. Then I managed to sit the terrace instead of the front orchestra, and had to scramble around to find the correct seat. Thankfully everyone involved was very nice to a rather harried and sleep-deprived Tattler.

The acoustics of Walt Disney Concert Hall are such that not only can one hear every sound of the musicians, but also of the audience members. This is especially terrible in the case of quiet music, in the Ligeti there was a veritable chorus of coughs from every direction. It seemed to me that if one person was to unwrap a candy in quite far away from where one was sitting, it could sit be heard and was not buffered by the presence other people or by the structure of the seating. Acoustically, everyone is exposed.

The audience was fairly good, impatient at the Ligeti but still quiet, attentive to the Salonen, and more relaxed with Beethoven. Either someone's hearing aid or some recording device made rather loud, high-pitched sounds during the loudest parts of the Beethoven.