The Death of Klinghoffer has a London stage premiere at English National Opera next season.

Diane Paulus is directing Olga Neuwirth's Lost Highway for ENO. The opera runs from April 4-11, 2008 at the Young Vic. The opera premiered in 2003 at the Helmut-List-Halle.

The English National Opera presented Lucia di Lammermoor for the first time this season, and the last performance was yesterday. The adorable Anna Christy made her British debut in the title role, despite recently suffering bronchitis. She has a sweet, warbling sort of voice, and from the reviews, it sounds like she was adequate, not distinguishing herself but not awful either. She certainly didn't get as much attention as the whole lip-synching incident of the opening performance. 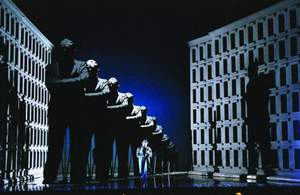 The Lucia production looks quite tame for David Alden, dark but not absurd. Neil Fisher titled his Times interview "David Alden, the Stephen King of Opera," which I don't find particularly apt, having seen half a dozen of Alden's productions. Stephen King is popular, and is known for horror. David Alden's productions did not seem popular at Bayerische Staatsoper, where I heard him booed a couple of times. Nor was his Rodelinda at San Francisco Opera popular, though not nearly as reviled as Anna Viebrock's Alcina or the recent Macbeth from Zürich. 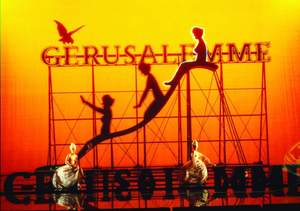 David Alden's work isn't exactly horror either, though he did have the valkyries give the audience gesto dell'ombrello with those wands airport ground handlers use in Die Walküre, for which he was he was roundly booed for at the end of the premiere. The enormous Playmobil doll whose trousers fall down in Rinaldo was also vaguely horrific (and also garnered the audience's vitriol), though I did like the cupcake frosting hairdos on the sirens. His Il Ritorno d'Ulisse in Patria  has the distinction of being the only opera performance for which I had a ticket for but did not turn up to simply because I could not bear to watch what he had done with Monteverdi another time. 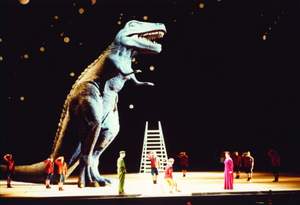 It is more self-indulgent than truly scary, even the T-Rex used for Giulio Cesare is not frightening! This image was used in Bayerische Staatsoper's advertising, and alas, I never managed to see it, as it was put on shortly before I arrived in Munich. For the past few years I've successfully avoided David Alden's productions and I'm slightly annoyed to see that the Radamisto at Santa Fe this summer is his. As there are not many Baroque operas being performed at major opera companies, it does seem inevitable that I will be forced to see Alden's work again.

Clive Bayley lost his voice during last Saturday's opening performance of the new Lucia di Lammermoor production at ENO. His understudy, Paul Whelan, sang from the side of the stage as Bayley mouthed the words and acted.

I've experienced something like this only once, at Bayerische Staatsoper's staged production of the oratorio Saul. David Daniels took ill, so Brian Asawa sang his part from the pit as the stage director acted the part on stage.

For folded flocks, and fruitful plains

* Notes *
Henry Purcell's King Arthur or The British Worthy is not an opera in the usual sense, as the main characters do not sing. The Mark Morris Dance Group production had its American premiere in Berkeley last Saturday, and all of Dryden's spoken dialogue is cut, meaning King Arthur himself never appears as such and basically there is no plot. The production also features the Philharmonia Baroque Orchestra under the direction of Jane Glover, the UC Chamber Chorus, and seven English National Opera singers as principals.

At times Morris' choreography is pat, simply miming the text, and worse yet was the absurd simulated sex at the end of Act II between shepherds and shepherdesses. There were many delightful moments also, especially the maypole dance in Act V. The dancers were all competent and utterly nonplussed by going through doors that lead nowhere dressed as giraffes or ducks or Bavarians as the case might be.

The singing was fairly consistent as well. Iestyn Davies shows much promise as a countertenor, his voice has good volume and is quite clear. Soprano Mhairi Lawson was perhaps least impressive, she wasn't bad by any means, but her voice is not especially pretty.

* Tattling *
The people in Row Q all shifted over from the side to the center, and subsequently, the man directly in front of me fell asleep for most of the first two acts. He woke up when the audience was laughing at the depraved bits of choreography. At least he and his companion had the good sense to leave the theatre at the intermission.