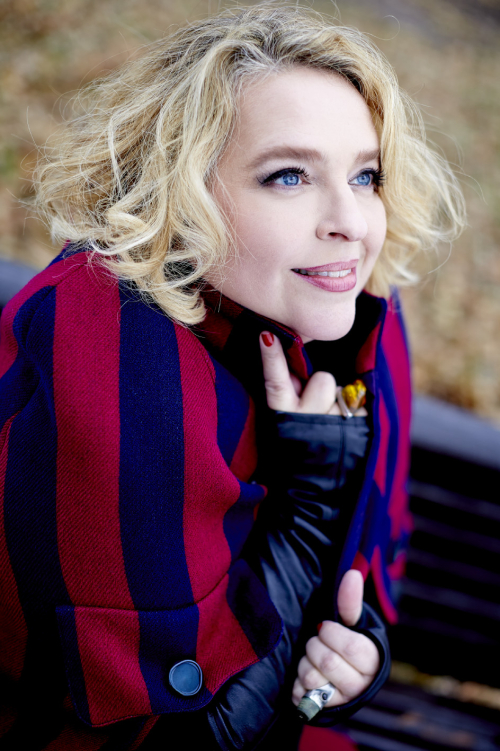 * Notes *
The English Concert, conducted by Maestro Harry Bicket, has been touring Händel's Alcina with a first-rate cast. Yesterday afternoon the group came to Cal Performances in Berkeley with the splendid soprano Karina Gauvin (pictured, photograph by Julien Faugere) in the title role.

The singing was uniformly wonderful, from bass Wojtek Gierlach's grave, authoritative Melisso to tenor Alek Shrader's pretty and appealing sound as Oronte. Shrader made the most of the concert version presented, and was able to convey humor without being over the top. The two mezzos, Paula Murrihy as Ruggiero and Elizabeth DeShong as Bradamante were nicely distinct. Murrihy has a light, sparkly tone, while DeShong's is almost baritonal, very dark and hardy. It was pretty amusing, given that Bradamante is a lady pretending to be a man and written for a contralto, and Ruggiero was originally played by castrato Giovanni Carestini. Murrihy sang "Verdi prati" in Act II particularly well.

Best of all were the sopranos, also sharply different from one another. Lucy Crowe made for an utterly charming Morgana, hapless sister of witch Alcina. Crowe's voice is truly brilliant, very pleasant on the ears, and her acting is endearing as well. Gauvin has a delicacy that works nicely for Baroque music, her pianissimi were exquisite. She doesn't have much vibrato and managed to fire things up when necessary, as with her Act III aria "Mi restano le lagrime."

The ensemble played neatly under Maestro Bicket's direction. The soli were all very strong, violinist Nadja Zwiener was excellent, as was cellist Joseph Crouch. The horns did were pretty darned good, only a tiny bit of fuzziness once, and I very much enjoyed how much Ursula Paludan Monberg danced to the music as she played. Also impressive was therobo Sergio Bucheli, who broke a string in Act III but managed to discreetly and calmly replace the string on stage.

* Tattling *
Perhaps people have forgotten how to turn off their devices during the pandemic. There was ringing near me in the mezzanine twice in Act II from two different patrons. Mask compliance was high, there are no concessions at Cal Performances right now, so any refreshments one partook of during the 3 hour 45 minute performance had to be snuck in.