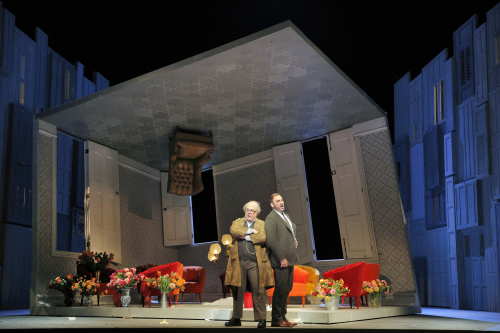 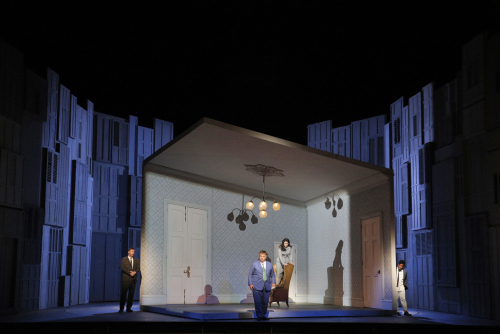 * Notes *
After an absence of over thirty years from the War Memorial stage, a new production of Don Pasquale opened Wednesday at San Francisco Opera. Inspired by Italian comedic movies from the 50s and 60s, the slapstick staging from Laurent Pelly features a charming turntable set (Act II pictured left, photograph by Cory Weaver) and extensive choreography that the superb singer actors pulled off immaculately.

Everything came together, the clever set and the pantomime style movement of the singers were not overwrought and always very funny. All the singing was great too, and the design of the set seemed to help project the voices.

Maurizio Muraro is hilarious in the title role, as is Lucas Meachem as Dr. Malatesta. Their duet in Act III, "Cheti, cheti, immantinente," was delightful. Heidi Stober certainly makes for a vicious Norina, the metallic tang of her voice adds to this reading of the character (which comes from the director, incidently). She can sing and pirouette perfectly, and one should note that she hurt her ankle in rehearsals, making it all the more amazing.

The big draw of this run is the San Francisco Opera debut of tenor Lawrence Brownlee, and he did not disappoint as Ernesto. His sound is unmistakable, very sparkling and agile, and with a certain tautness at the top. He sang in a closet, with his head against a wall, and on a ladder, but none of this seemed to effect his voice.

The orchestra was lively under Maestro Giuseppe Finzi, not always perfectly synchronized, but always full of energy. The trumpet solo at the beginning of Act II from Adam Luftman was particularly beautiful.

* Tattling *
The last few rows of the balcony were nearly empty, making standing room ideal. This production looks great from the back and all the movement reads clearly.

Twitter indicates that there was a lot of bad behavior in the audience, but I only noted that the person in Row L Seat 108 took her shoes off and that the woman in Row L Seat 126 crumpled a wrapper as Heidi Stober sang in the beginning of Act III.

It is too bad that SF Opera isn't putting on an Opera for Families version of this Don Pasquale. I know my son would adore the set because it has so many goofy sight gags involving doors, chairs, and light fixtures. Speaking of which, it would be fun to see the narrated set change that SF Opera periodically does during intermission for this one.

* Notes *
Don Pasquale was performed by the Merola Opera Program at Cowell Theater recently. Warren Jones conducted a swift and lively performance on Saturday afternoon. The production from Nic Muni was entertaining but not entirely coherent.

Muni's direction involved the action taking place on a film set, complete with tempestuous starlet and mollifying director that appear between scenes in the middle of Act I. The author of the screenplay is Ernesto, while Norina is a cleaning lady behind the scenes.

In Act II, for some reason Norina takes the leading role while the starlet, director, and others observe. The garden scene of Act III has many of the extra characters dressed in green, with green stockings over their faces. This does not connect to the earlier action in a meaningful way, though it was amusing.

Of course the main attraction of any Merola performance is the singing, which was impressive and rather loud. Soprano Amina Edris (Norina) has a voice as clear as a bell, and she was able to characterize her part as Sofronia with a distinctive shrill sound. Tenor Soonchan Kwon makes for an endearing Ernesto, but seemed to struggle with intonation during Act III. Baritone Alex DeSocio was a robust and funny Dr. Malatesta. Bass-baritone James Ioulu likewise was strong in the title role and did a fine job with the patter.

* Tattling *
There were squeaking electronics for much of the first half, but this was resolved for the second. As usual there were seagulls heard. Also audible was a small child fishing with his father just outside the theater.

* Notes *
At first glance, the revival of Don Pasquale (Act II, Scene 2 pictured left, photograph by Ken Howard) at San Diego Opera simply looks like someone took a set and costumes for Fanciulla del West and used it for Donizetti's work. Thankfully, there is much more to director David Gately's elaborate production, which is quite funny. This Wild West version of Don Pasquale works because the essentials are still true to this opera buffa. The characters are all believable, and this rendering has a lot of charm. The gags just keep on coming, and perhaps at times this felt somewhat overwrought. The sets, from Tony Fanning, descriptive and painstakingly detailed, as are the costumes from Helen E. Rodgers.

Conductor Marco Guidarini made his San Diego debut with yesterday's performance. The orchestra played with the necessary fleetness, and were often rather loud. The trumpet made a brave effort at the beginning of Act II despite a few raw moments. The chorus moved well, and though not precisely together, sang nicely. The principal singers were cast evenly. Jeff Mattsey was an entertaining Dr. Malatesta, and his singing was fine aside from some of the patter in the duet "Cheti, cheti, immantinente." Charles Castronovo (Ernesto) had a pretty lightness and the right mournfulness for the role. His voice sounds slightly metallic when he pushes it too hard. Danielle de Niese's Norina was completely convincing, her gestures and expressions were faultless. Though her breathing is noticeable, her voice is deft and bright. John Del Carlo was hilarious in the title role. His sound is warm and his enunciation was excellent throughout, especially in the aforementioned Act III duet with Mattsey.

* Tattling *
There was light talking throughout the opera, and a watch or phone alarm rang during Act III Scene 2.

Don Pasquale at the Met

* Notes *
Don Pasquale had its 133rd performance at the Metropolitan Opera on Friday night. From what I could see at Score Desk 2, the sets and costumes, designed by Rolf Langenfass, were entirely traditional. One can only imagine Otto Schenk's 2006 production was likewise.

The orchestra sounded lucid under James Levine. The trumpet solo at the beginning of Act II was especially fine. The chorus was also fine. Anna Netrebko, while not possessing a particularly apt voice for bel canto, otherwise acquitted herself in the role of Norina convincingly. Her voice remains robust and dark, her gasps rather audible. Matthew Polenzani sounded sweet and disarmingly vulnerable as Ernesto.

Mariusz Kwiecien (Malatesta) started off with a slight wooliness, but sounded strong otherwise. His acting skills were apparent through his voice. In the title role, John Del Carlo was similarly shaky at first, but again, his consummate acting came through vocally. The Act III duet, "Cheti, cheti, immatinente," was particularly charming, and we were even favored with an encore of this as the finale scene was set.

* Tattling *
Though I did not receive my score desk ticket in the mail as I expected, the Met Opera Guild's Community Programs Fellow made sure it was waiting for me at the box office. During the performance itself, a family of three seemed completely confused about where they were sitting in the Family Circle. In any case, they were not together, and felt fit to wander over to one another and speak aloud as the performance occurred. Mercifully, they went elsewhere after the intermission.

Mezzo-soprano Stephanie Blythe is singing Dalila, which should be interesting. Vivica Genaux and William Burden sing the lead roles in L'Italiana, as they did in San Francisco a few seasons ago, and it is the same cute Santa Fe production as we saw here. Former Adler Fellow Sean Pannikar will sing Jim Casy in The Grapes of Wrath.

The Merola Opera Program is an 11-week summer program of performance and study under the auspices of the San Francisco Opera. The program culminates in two fully staged and costumed productions, in this case, Donizetti's Don Pasquale and Britten's The Rape of Lucretia.

The two performances of the former production were held at the Yerba Buena Center for the Arts, a rather staid venue. As charming as Donizetti's music is, the cast was mediocre, no one particularly stood out as truly gifted, though it must be said, the acting was solid. The production itself was a bit dull, soprano Rhoslyn Jones first appeared as Norina in a bubble bath, o-la-la, indeed. Her voice is nothing special, not so comfortable in the high range. Baritone Alexander Tall (Malatesta) and tenor Jeremy Little (Ernesto) both lacked vocal power and vitality.