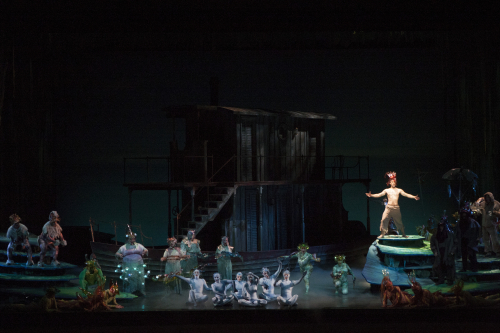 * Notes *
A vibrant production of Daniel Catán's Florencia en el Amazonas opened at San Diego Opera last night. The sets and singing had much to recommend it, and it was easy to see why this piece has been revived multiple times in the almost 22 years since its premiere in Houston.

The music is lyrical and exuberant, and most of the singing was absolutely lovely. Only baritone Luis Alejandro Orozco (Riolobo) seemed underpowered, though he is a fine actor and boasts an impressive physique.

I liked the range of emotions portrayed by mezzo-soprano Adriana Zabala as Paula, part of a bickering couple seeking to renew their love, she was frighteningly shrill at the outset and charmingly warm at the end. Her other half, baritone Levi Hernandez as Alvaro, was affable. Baritone Hector Vásquez (Capitán) sang with authority.

The set, from Mark F. Smith, is essentially a steamboat on a turntable, and this is effective, especially with the lighting. It definitely had a resemblance to Werner Herzog's Fitzcarraldo, which is fun, since both works deal with the Amazon and opera. Much of the chorus wore unitards some festooned with elaborate accessories to represent the water of the Amazon and various jungle beasts. This was in keeping with the libretto, which takes inspiration from Gabriel Garcia Marquez (perhaps Love in the Time of Cholera is most obvious) and has a dreamy, surreal quality.

* Tattling *
The audience fairly quiet, though two men behind me in the center of Row S did make some loud comments.

* Notes *
The Los Angeles Opera 2010-2011 season opened with the world premiere of Daniel Catán's Il Postino. The music is lush and ornate, has soaring lyrical lines, and is pretty enough to not scare those wary of new music. Though the action takes place in Italy, and the title is Italian, the libretto is in Spanish. This was amusing, a sort of inversion of famous operas like Carmen or Il Barbiere. Neruda's poetry is used in the text, especially the poem "Mañana XXVII."

The set and costumes, both designed by Riccardo Hernandez, likewise were attractive. The tiled turquoise and cobalt floor was especially stunning, though one imagines the effect is better from the balcony than the orchestra. Jennifer Tipton's lighting designed featured many spotlights, and the those projections by Philip Bussmann that were visible in the balcony involved many words and water.

Grant Gershon conducted the orchestra, the sound was full, the brass blurred. The onstage banda was charming, and the accordion was particularly wonderful. The chorus sounded lovely in Act III, this was one of the most moving parts of the piece. The clear standout in the smaller roles was Gabriel Lautaro Osuna (Mario's father), who sang a gorgeous a cappella aria in the wedding scene of Act II. The music here was poignant.

Nancy Fabiola Herrera was hilarious as Donna Rosa, Beatrice's suspicious and protective aunt. Her warm voice betrayed no strain. In contrast, Cristina Gallardo-Domâs trembled her way through Matilde Neruda, and the Act II duet with Plácido Domingo (Pablo Neruda) was not flattering to her. Amanda Squitieri (Beatrice Russo) was icy and piercing, at first perhaps a bit shrill, but she sounded strong in the last act.

Charles Castronovo was winsome in the title role, he projected the earnest, often abashed nature of Mario Ruoppolo clearly. Though he has a very pleasing sound, vocally he could not compete with Domingo. The latter sang with vigor and youth, despite having not sung in the final dress rehearsal because of a sore throat.

* Tattling *
The audience was better behaved than usual. There was some speaking and unwrapping of cough drops during the music. A few watch alarms were also heard. The worst noise seemed to come from the lighting booth at the very back of the house.

The crowd at the stage door after the performance was formidable. One person was heard to joke that he had could not believe someone made an opera of Kevin Costner's post-apocalyptic film. A pair of immodest girls in revealing gowns were seen congratulating tenor Daniel Montenegro (1st Thug).