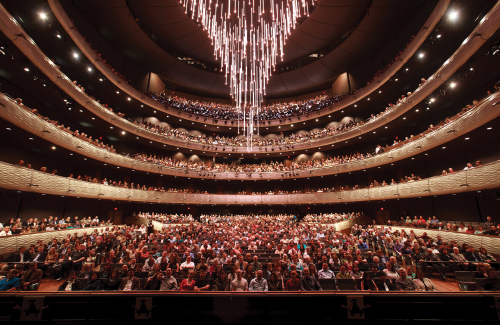 The Dallas Opera announced a 2017-2018 season which includes the American premieres of the Korngold rarity The Ring of Polykrates and Michel van der Aa's Sunken Garden.

Only 3 operas next season, down from 6 in 2011-2012. Latonia Moore sings the title role of Aïda, Lise Lindstrom the title role of Turandot, and Susan Graham has her Dallas Opera debut opposite Carol Vaness in Dominick Argento's The Aspern Papers.

Dallas Opera has cancelled a production of Katya Kabanová scheduled for October 28 - November 13 2011. Patricia Racette was to sing the title role.

Keith Cerny will be the next general director of Dallas Opera, starting May 24, 2010.

Jonathan Pell has been named Artistic Director of Dallas Opera.

George Steel is assuming the post of general director at the Dallas Opera on October 1st. Steel has been the executive director at Columbia University's Miller Theatre since 1997.

"You know, the thing that's really remarkable about that book for the time period in which it was written is the improvisational, free-flowing nature of it. He goes from straight prose to something like love poetry to setting up scenes as though this were a play--and then, back again!"

I particularly like that this interview with Jake Heggie and Gene Scheer is prefaced (at least, at the time of writing, one assumes it will be corrected at some point) "A discussion with composer Jake Heggie and librettist Jake Heggie about the upcoming world-premiere production of Moby-Dick for The Dallas Opera." Personally, my favorite part of Melville's text is Chapter 55, "Of the Monstrous Pictures of Whales," in which mistakes in depicting whales are discussed. Chapter 56, "Of the Less Erroneous Pictures of Whales, and the True Pictures of Whaling Scenes," is slightly less amusing. Doubtless these chapters will not appear in the opera, but one can live in hope.

Doubtless you have heard that the current Dallas Opera production of Salomé was laughed at last Friday. By coincidence, just after reading The Dallas Morning News article on Salomé, I heard Radiolab's latest show entirely devoted to laughter. Particularly interesting were the segments on Dr. Jaak Panksepp's research on tickling rats and Dr. Robert Provine's work on chimp laughter. Among the theories on why humans laugh presented were to signal safety or play.

I wonder exactly what the audience was laughing at in Salomé, if it was simply the absurdity of the staging or something else. Mlada Khudoley (pictured) certainly does not look inappropriate as the dancing seductress.

Listening to Radiolab reminded me that they aired an hour-long special about opera earlier this year. Entitled "The Ring and I: The Passion, The Myth, The Mania," the program discusses the Ring Cycle at the Met in 2004. The show starts with the statement "Opera people are all nuts," which seems quite apt indeed. Jad Abumrad interviews Alex Ross, Speight Jenkins, Tony Kushner, Jane Eaglen and others in this amusing piece about Wagner's epic work.