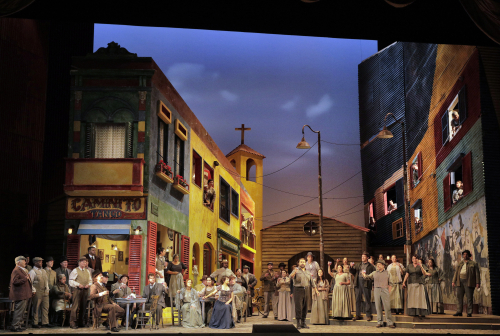 With the departure of Nicola Luisotti, San Francisco Opera is looking for a new music director and Maestro Daniele Callegari is the first of many conductors making a debut at San Francisco Opera this season. The orchestra sounded transparent, particularly the harp and strings.

Because of the orchestra, the Intermezzo in Cavalleria Rusticana was the best moment of that opera, despite the surreal dance choreography at odds with the realistic production. Likewise, the chorus did a great job throughout the two operas, singing with cohesion and gamely depicting the busy neighborhood denizens.

The leading ladies are powerful here and both sang with much emotion. Mezzo-soprano Ekaterina Semenchuk's Santuzza has much pathos, even when she used a shrill edge, it was not inappropriate to her role. Soprano Lianna Haroutounian is secure and lovely, she makes a pretty little Nedda and the violence against her was especially pronounced because of her small stature. Her singing with David Pershall as lover Silvio was beautiful.

The men were more of a mixed bag. The off stage singing of tenor Roberto Aronica (Turiddu) was warbly but his drinking song ”Viva, il vino spumeggiante" was strong. Baritone Dimitri Platanias was serviceable as Alfio in Cav and more gripping in Pag both in the Prologue as Leoncavallo and Tonio, the buffoon who tries to force himself on Nedda. Most compelling was tenor Marco Berti as the betrayed Canio, his anger is palpable. “Vesti la giubba” was a high point of the performance.

José Cura's production, directed here by Jose Maria Condemi, is at once static, just the one street scene in Buenos Aires in the Italian neighborhood La Boca, and fiddly, with people constantly walking through, peering out their windows and the like. The idea has its appeal, why not have these two operas, so often done together, inhabit the same world? In practice, it was forced, and confusing unless one consulted the program as characters from Cavalleria Rusticana showed up in Pagliacci. I ended up feeling very sorry for Mamma Lucia (played by mezzo-soprano Jill Grove) who mourns for not only her son Turiddu but for Silvio as well, since he is a waiter at her tavern.

* Tattling *
Standing room was not competitive at all this year, I arrived at the opera house at 9:52am and got tickets 8 and 9. The opening night crowd was raucous, applauding and cheering Nancy Pelosi, who was in attendance.

There was the usual talking and inattention, particularly after the intermission as many people did not make it back to their seats in time and were stuck at the back of the orchestra level. Someone in this area talked loudly on his cell phone during Pagliacci. I also heard someone's device ring with the sound of crickets during a quiet part of this opera, which seemed terribly inappropriate.

Cavalleria rusticana featured Beatrice Uria-Monzon (Santuzza) and José Cura (Turiddu). Uria-Monzon embodied her role, the anguish in her voice was palpable. Cura sang with strength, his reedy voice was easy on the ear. The rest of the cast supported them well. Cheyne Davidson did have some timing problems as Alfio, particularly in his first vocal entrance. Katharina Peetz was alluring as Lola and Cornelia Kallisch maternal as Mama Lucia. The latter had a poignant scene with Cura near the end of the opera.

The female lead of Pagliacci, Fiorenza Cedolins, was less exciting. Her singing was not bad, perhaps it is simply more difficult to sympathize with the character of Nedda. Cura sang Canio compellingly, his voice sounded secure, his high notes without strain or compression. Carlo Guelfi was persuasive in the Prologue and threatening as Tonio. The supporting cast here was likewise fine, including Boiko Zvetanov (Peppe) and Gabriel Bermudez (Silvio). The orchestra continued to play with spirit, and cello soli were particularly beautiful.

* Tattling *
There was much whispering in the boxes. A man tapping out the rhythm during Pagliacci, but he was silenced with a stern glance. The maestro tried to stop the ovation after Cavalleria rusticana's intermezzo by dismissively waving his hands.

AP reports that Santa Barbara Opera just received an anonymous donation of 5 million dollars. Founded in 1994, the company continues the 2007-2008 season with Cavalleria Rusticana and Pagliacci beginning tomorrow night. In March they will present L'Elisir d'Amore.

Next season, Elizabeth Futral and Nathan Gunn sing in the world premiere of André Previn's Brief Encounter. Dolora Zajick sings Santuzza in Cavalleria and Brandon Jovanovich has his HGO debut as Turiddu. The lineup is oddly devoid of Puccini, and is quite complementary to Dallas Opera's season.