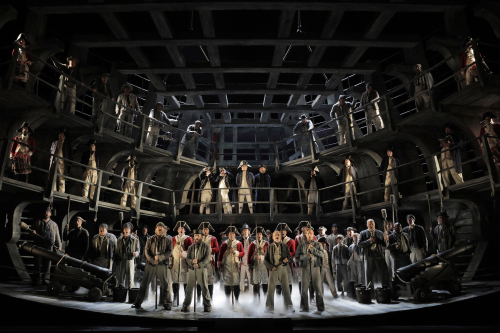 The Michael Grandage's production comes to us from Glyndebourne and is directed here by Ian Rutherford. The set (pictured left, photograph by Cory Weaver), from Christopher Oram, is tiered and suggests both a ship and a prison. The seven scenes are handled well, the set changes happen without ever lowering a curtain, though of course it is much easier in this case since all the action happens on the HMS Indomitable.

The male chorus sounded solid and very cohesive. All the singing and acting was strong. From bass-baritone Philip Skinner's gruff but tender Dansker to tenor Matthew O'Neill's bright-voiced Squeak, even the smaller roles are finely cast. 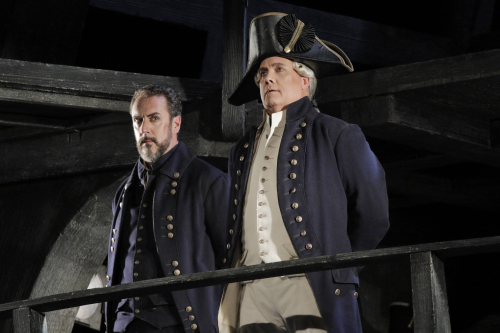 Bass-baritone Christian Van Horn made for an excellent villain as John Claggart, and managed to even be almost sympathetic at times in his aria at the end of Act I. Baritone John Chest makes an ideal Billy Budd, he looks and sounds the part, completely embodying the goodness and haplessness of the title role.

Best of all is tenor William Burden (pictured with Christian Van Horn, photograph by Cory Weaver). His wonderfully sweet voice is always consistent, and his Captain Vere is heartbreaking.

* Tattling *
I am not a big fan of Benjamin Britten, but I seem to like this opera, especially Act II's "Don't like the French!" It always makes me chuckle, and I like that there is humor in this otherwise very serious piece.

Sadly, the balcony had rows of empty seats. Nevertheless, the audience members that were there managed to be quite annoying anyway. There was a man in the last row who talked a bunch, and one of companions rustled a plastic packet for what seemed like minutes while Billy Budd sings his last lines in Act II, Scene 3.

The next season at Santa Fe Opera includes the US premiere of Kaija Saariaho's newest opera. Naturally the production of Händel is from David Alden, whose work I am all too familiar with from Munich. David Daniels will be singing the title role of Radamisto. William Burden is singing Starry Vere in Billy Budd. Mariusz Kwiecien will be singing Almaviva in Le Nozze di Figaro.

Britten's Billy Budd returned to San Francisco Opera for the second time in twenty years. Willy Decker's sedate and elegant production was designed by Wolfgang Gussmann and staged by Sabine Hartmannshenn. The music was certainly more charming than Britten's work Death in Venice, particularly the absurd duet "Don't Like The French!," whose words include "hoppity-skippity ways." No one less than E.M. Forster wrote the libretto. Baritone Nathan Gunn in the title role did rather well, he is also a good actor.