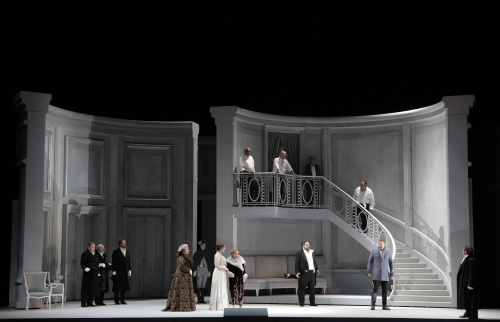 Many of the smaller roles were filled by singers familiar to those of us from San Francisco, such as former Merolini Susanne Hendrix (Fortune Teller) and Jonathan Michie (Dominik). Current Adler Fellow Brian Jagde sang Count Elemer with strength. Dale Travis and Victoria Livengood convinced as Arabella's rather silly parents.

Heidi Stober sounded lovely as Zdenka, and was suitably naive and boyish. Mark Delavan could have sung Mandryka with a bit more heft, but the weight of his voice suits this venue better than the War Memorial. He did inhabit the character and his movements were appropriate to his role. Erin Wall sounded icy yet sturdy as Arabella.

* Tattling *
There was again a lot of talking at this performance. The woman in Mezzanine Row G, Seat 107 would not be silent, even when glared at several times.