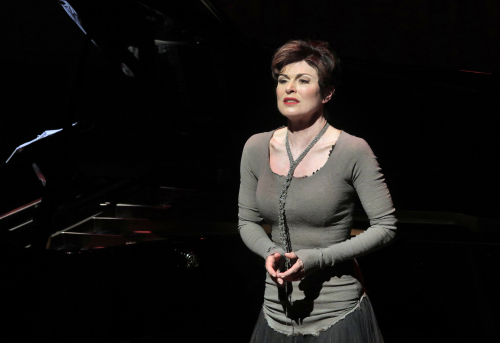 * Notes *
Last night the arresting soprano Anna Caterina Antonacci (pictured left, photograph by Cory Weaver/San Francisco Opera) gave the first of three performances of songs by Berlioz, Debussy, and Poulenc paired with a piano version La Voix Humane at SF Opera Lab. Antonacci gave a compelling renditions of the various French songs, all the more impressive since it was only her voice and the spare accompaniment of Donald Sulzen's piano.

Part of her appeal is certainly her voice, which is far from your garden variety clean, pure soprano, and in fact Antonacci started her career singing mezzo roles, especially Rossini, which doesn't seem particularly well suited to her sensual sound. She did great with Berlioz's "La mort d'Ophélie", very emotionally on point and haunting. Likewise her "Le tombeau des Naïades" from Debussy's Chansons de Bilitis was particularly strong. 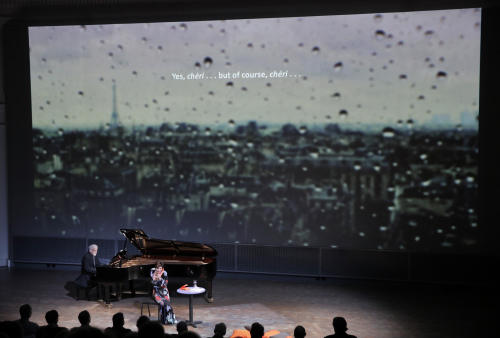 Poulenc's 1958 La Voix humane is essentially a monologue of a suicidal woman on the telephone with her former lover. Its success as a piece of drama rests heavily on the the one singer, and Antonacci delivered, she is an incredible actress and it was hard to look away.

Simple and concise, the 40 minutes flew by, and we experience everything from the petty annoyances of being on a party line to the utter depths of despair of being abandoned and unloved.

The plain, stripped down staging of a simple rain drop covered window with a view of Paris with only a table, chair, and a few pillows was perfect and matched the simplicity of the opera itself.

Antonacci's costume was a bit odd, it looked like a 70s floral house dress, with panels that opened in the front and a cut-out in the back. I was also confused by (though also enjoyed) her gown for the songs, which looked to be a long grey leotard-inspired tunic whose sleeves covered her hands and had the saddest tulle tutu-like skirt.

Tattling *
Many audience members were mostly quiet, though a few people had to exit during the music.

* Notes *
A new co-production with the Norwegian Opera of Carmen opened at the Royal Opera House opened last month and runs until February 3, 2007. All the performances are sold out, but 67 tickets are held to be sold the day of the performance as day seats. Last Thursday I tried this, getting to the entrance situated under the covered arcade in the corner of Covent Garden Piazza at 7:15 in the morning. The queue was already 20 people long, but getting tickets wasn't a problem, we got bench seats in the Stalls Circle. The ticket seller seemed surprised and said it wasn't always so crowded.

The production, directed by Francesca Zambello, was not perfectly congruous. The costumes were traditional, but the set was just a few large walls placed at different angles for each act. There were props such as an orange tree and a statue of the Virgin Mary that were in keeping with the costumes but not the set. Also featured were an abundance of live animals, including a donkey, a horse, and chickens. Another crowd-pleaser was Arthur Pita's choreography in the form of acrobatics and dancing.

None of the singing was particularly good. Anna Caterina Antonacci had her Royal Opera House debut with the title role, which she is sharing with Marina Domashenko. Antonacci is a strong actress, she was sultry and a bit mean, perfect for the role. Her voice is nice within a certain range, but has some unpleasant qualities outside of that. She gasped a few times and was occasionally flat. I appreciated that this production had the castanets played by a percussionist in the pit, but it would have been nice if they had Carmen at least mime the playing instead of having her alternately stamp the rhythm in her feet or bang together mugs in her hands. Jonas Kaufmann was strained as Don José, his voice is small and slightly nasal. He was quite underpowered compared to Marco Berti, with whom he is sharing this role. Ildebrando D'Arcangelo looked uncomfortable as Escamillo, quite stiff. His voice sounds constrained somewhere in his throat, it has a husk-like feel. He sang half of "Toreador en Garde" on horseback, which was silly but the audience enjoyed it. Norah Amsellem was an insipid Micaëla, she was shrill, out of tune, had too much vibrato, and was even off from the music a few times.

* Tattling *
People talked during the overture, but were fairly quiet the rest of the time. There was some cellophane being unwrapped during Act I, which was hushed quite vigorously, and not by me for once.

Antonacci flashed her undergarments several times during the course of the opera, impressive given that her skirts were all ankle length.

The performance was only 3 hours and 10 minutes long with one intermission, even though they did the longer spoken dialogue version of the opera. They cut "A deux cuartos" from the beginning of Act IV, so that may have contributed to the brevity of the performance.

Due to a scheduling mishap, La Cenerentola and Angelika Kirchschlager's recital of Lieder von Franz Schubert on one evening. The opera started at 5pm and ended at 8:15pm, the recital began at 8pm but was only 5 minutes away by taxi. Nonetheless, the first half of the Lieder were missed. Straining to listen in the hallway, but it was not quiet enough.

The second viewing of La Cenerentola only confirmed my great love for this particular production. Due credit must be given Grischa Asagaroff, who directed, since Jean-Pierre Ponnelle, who headed up the staging, set, and costumes, died in 1988. The singing of all the principals again was quite good, the choreography was perfect, and this time Martin Gantner was well enough to run. I feel it is also only fair to say the title role is quite difficult, for coloratura contralto, and that Antonacci did an admirable job.

Kirchschlager's voice is clear and warm, without the slightest darkness whatsoever. She has very good control and precise enunciation.

This evening's performance of Rossini's La Cenerentola at the Bayerische Staatsoper seemed to be fraught with various issues. Petia Petrova, the mezzo set to sing the title role, was indisposed, and Anna Caterina Antonacci sang in her stead. Baritone Martin Gantner had hurt his foot recently, and was unable to run about as the choreography dictated.

Nonetheless, the performance came off rather well. Myron Romanul conducted the reduced orchestra well enough. The evil stepsisters, Clorinda and Tisbe, were both acted very well by sopranos Julia Rempe and Helena Jungwirth. Jungwirth's voice is even more quiet and shrill than Rempe's, but the role is small. Likewise, Bruno Pratico was a hilarious Don Magnifico, but his voice did not have much volume. The audience, of course, absolutely adored him. Martin Gantner seemed just fine as Dandini, I would have never guessed he was hurt, except for the announcement. His voice sounded better in Così as Guglielmo, but it is probably because of the part not the singing. Juan José Lopera had a sweet tenor good for the part of Don Ramiro, but he was a touch low on volume. Anna Caterina Antonacci's voice certainly was pretty compared to the sopranos, but she lacks control which lead to a few intonation problems. Her voice certainly was not one that felt effortless and free. The bass John Relyea as Alidoro was most impressive, his voice was both warm and clear, with excellent volume.

The set was charming, involving trompe l'oeil on curtains or panel in white and black. The effect was slightly Edward Gorey. There were essentially two sets, the Don Magifico household and the palace. Set changes happened behind various curtains and were more or less flawless. There was rain in Act II, Scene 7, as Ramiro and Dandini approach Don Magnifico's house for a second time. The scene was pretty and there was a chorus member walking a black poodle, which made the audience gasp.

The choreography was highly artificial, but very much with the music and suitable for the singers. Julia Rempe was especially amusing in the first scene when she is en pointe trying out ballet moves with little success.

The costumes were extremely pretty, gauzy and ribboned and Rococo. Jean-Pierre Ponnelle had a clear vision of what he wanted for staging, set, and costumes, and this was utterly apparent.

I had never seen a Rossini opera before, only heard a recording of Tancredi with Ewa Podles and Sumi Jo. Everyone knows a little bit of Guillaume Tell and Il barbiere di Siviglia, I suppose. The music was nice, very light and sweet. I liked "Una volta c'era un Re."