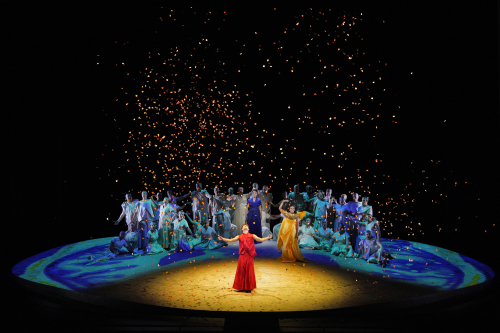 The musicians were laid out in quite an interesting way, with the horns next to the bassoons in the last row close to the prompter's box. The flutes and oboes were just ahead of them, and the clarinet was off to the side, where the basses usually are. Whelan's conducting was crisp but not metronomic. The woodwinds and harp were especially lovely.

The unfussy set, designed by Alexander V. Nichols, was essentially a turntable with projections, which are apparently of brain images. There are swings, making good use of the vertical space without having to take any pauses to switch the scenes. There are also 3 pairs of dancers, meant to represent the title couple in different stages of their life together. Rena Butler's choreography felt comfortingly familiar to me, it was sculptural without being static, and there was athleticism and acrobatics but also elegance. Jessica Jahn's costumes in warm shades for Orfeo and cool tones for Euridice were likewise tasteful, in keeping with the classical plot. 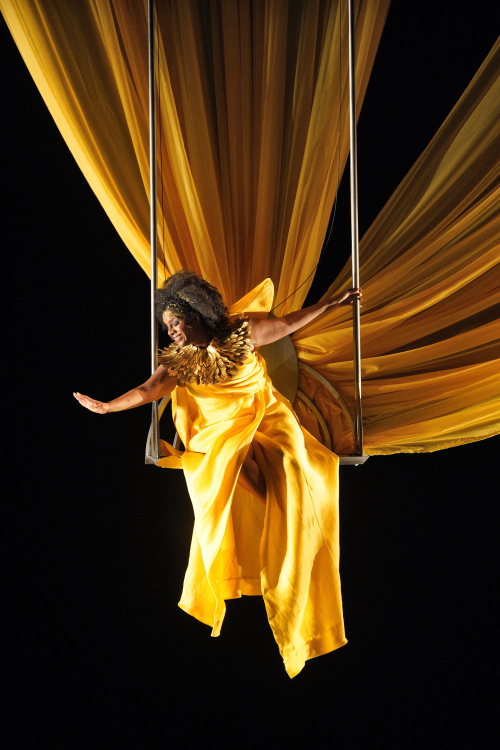 The chorus sounded powerful and together throughout the piece, they supported the principals without overwhelming them and negotiated the spinning set with ease. The principals are all clearly talented. I very much enjoyed the humor-infused performance of soprano Nicole Heaston (pictured, photograph by Cory Weaver) as Amore. Heaston sang with rich warmth and was charming.

The icier sound of soprano Meigui Zhang was suitable for Euridice. Her voice is clean and graceful, though perhaps not very distinctive, it did contrast with both of the others. Zhang did well with the dancing and did not look out of place among the dancers.

The same could be said of Orliński, the piece opens with him doing handstands and leaps during the overture. I was a little shocked to hear his voice, I had thought he was one of the dancers. His sound is strong and clear, very smooth throughout his range. His "Che farò senza Euridice?" was filled with pathos and very moving.

* Tattling *
This was part of my subscription, and I loved peering at the orchestra from Box X. I was a bit concerned about the trio of chatty young men in Box Y, but they were very much into the opera and didn't say a word during the 90 minute performance.

In fact, I had such a nice experience, without talking, coughing, mobile phones, or watch alarms, that I'm a bit hesitant to attend this opera again, I'd like to hold on to this pleasant memory. But I will be there at least twice more, as this opera is rare and San Francisco Opera has only performed it in one other season. 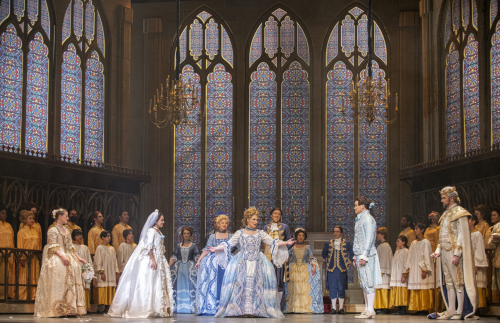 * Notes *
Alma Deutscher's Cinderella (Act IV pictured, photograph by David Allen) returned to Opera San José last weekend with the seventeen-year-old composer in the pit in her international conducting debut. I brought my Kindergartner to the delightful Sunday matinée as her very first opera.

Ms. Deutscher finished this opera when she was only ten years old, and it premiered here at Opera San José five years ago to great acclaim. The music is neo-Romantic and very pretty, Maestra Deutscher conducted well, she kept things moving and it all sounded clear and synchronized. At 2 hours and 45 minutes (with an intermission), it did feel a bit longer, but perhaps I was on edge as my five-year-old is not as good as sitting still as my eight-year-old was at her age. The overture definitely made me think of Wagner, and there were interpolations of Meistersinger into this piece, as there is a singing competition at the Prince's ball. There were also entertaining bits of Verdi's La Traviata and Mozart's Die Zauberflöte that probably flew over my child's head, but I laughed heartily.

This version of the Cinderella story has the main character and her step-family in an opera house, Cinderella is a burgeoning composer, the step-sisters are singers. The Prince is an aspiring poet but his father wants him to marry and take over the throne, so they throw a masked ball with a singing competition so he can chose a bride. The fairy godmother is disguised as a poor old woman in the woods, and instead of mice and birds, this opera has an elven children's chorus.

Director Brad Dalton's production is sumptuous, a dream come to life. The set, by scenic designer Steven C. Kemp, has lots of layers and the scenes are easily changed. Only the switch from palace back to woods and opera house (between Acts III and IV) had a big pause, and Deutscher talked us through it, which was a good way to set up the scene without losing momentum.

The singing was all very light and sparkling. Soprano Stacey Tappan and mezzo-soprano Julia Dawson were very funny as the step-sisters Grizelda and Zibaldona, and soprano Rena Harms was cartoonishly evil as the step-mother. It was very charming. I was happy to hear Harms again, her Merola performance as Donna Elvira back 2008 has really stayed with me. 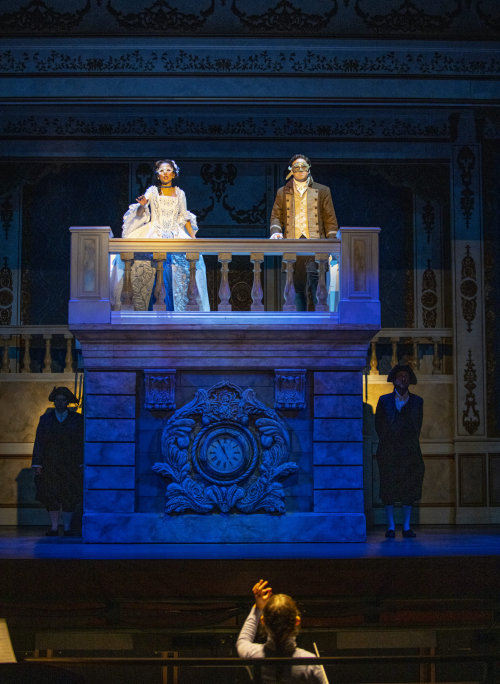 The Prince and Cinderella (pictured in Act III, photograph by David Allen) made for an adorable couple. Tenor Joey Hammond-Leppek has a sweet reediness and soprano Natalia Santaliz is a bell-like songbird.

The cast was rounded off by bass-baritone Joshua Hughes as the Minister, contralto Megan Esther Grey as the Fairy, and bass-baritone Ben Brady as the King. They all are fine actors and good enunciators, which was great for my pre-literate daughter. I am very curious to hear Grey again, the depths of her voice are quite appealing.

*Tattling *
I think I must have been utterly discombobulated by the logistics of my trip to San José, as I mistakenly sat on the wrong side of the house in Row F Seat 4 instead of Seat 3. It was pretty embarrassing, and I sincerely apologize to the people whose seats we took for Acts I and II.

There were some cell phone rings noted and some snoring, so again, we seem to be coming out of pandemic times to something more normal.

The audience was full of energy and joy for the performance, and I was glad that my daughter was able to be part of such an engaged group of people. She seemed to like the performance a lot, and enjoyed having time with me without her sibling. She also loved dressing up for the occasion, and was only too glad to make use of the selfie station at the entrance to the theater. She insisted that I switch out my fascinator for a crown. 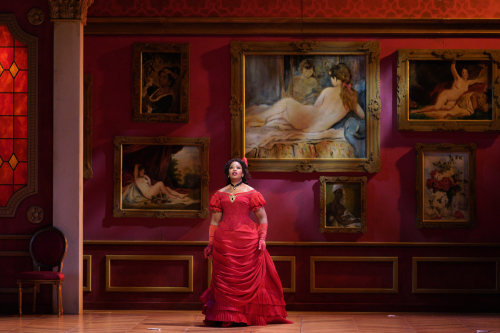 * Notes *
A brand new production of Verdi's La Traviata (Act II Scene 2 pictured, photograph by Cory Weaver) opened at San Francisco Opera yesterday evening, kicking off a series of operas by this composer conducted by our new Music Director Eun Sun Kim. The orchestra sounded lovely, but definitely more restrained than in previous outings of this piece in recent memory.

The overture was handled quite well by Maestra Kim, everyone sounded very beautiful, the tempi were not excessively fast. There were moments with the chorus in particular where there were issues with synchrony. The offstage bandas in both Act I and Act III sounded nice and together. The strings were exquisite in Act III, as Violetta dies.

There were six former Merolini in this opera, so a lot of familiar faces and voices. Most notable of these were mezzo-soprano Taylor Raven (2016) as a sympathetic Flora Bervoix and bass-baritone Philip Skinner (1985) as a rather terrifying Baron Dauphol. 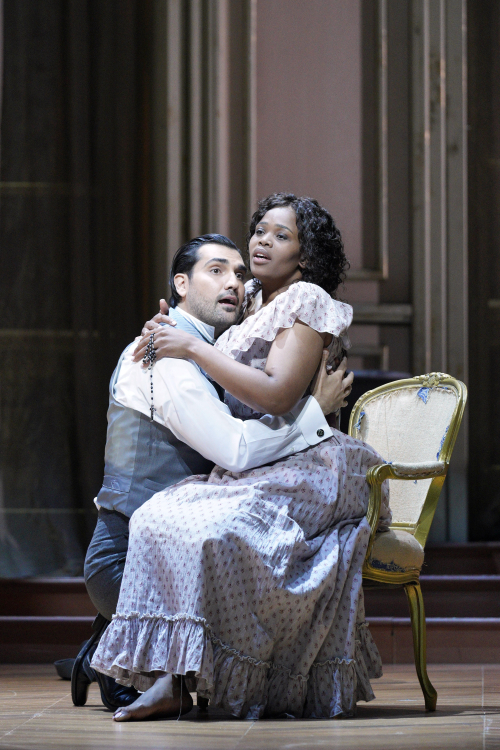 For the three most important principals we had three San Francisco Opera debuts. Baritone Simone Piazzola had a lush warmth as Giorgio Germont, the right mixture of sternness and fatherly care. He sang both "Pura siccome un angelo, Iddio mi diè una figlia" and "Di Provenza il mar, il suol chi dal cor ti cancellò?" very well, the latter stuck with me as a highlight of the evening. Tenor Jonathan Tetelman (Alfredo) had a very pretty moment in the Act I duet "Un dì, felice, eterea," but had a tendency to yell his high notes otherwise, he doesn't seem to have perfect control of his volume. Most interesting was the Violetta, soprano Pretty Yende. Her singing in Act I seemed a bit delicate and icily metallic, but she brought incredible pathos to Acts II and III, and the resonances of her voice worked very well for her duets with Germont and Alfredo. I found her "Gran Dio!...morir sì giovane" at the very end particularly arresting.

This new staging from director Shawna Lacey looks very much like her Tosca from 2018, and it isn't a surprise that the set designer, Robert Innes Hopkins, is the same. I do wish that they had taken this opportunity to make the scene change in Act II smoother, it really took a lot of time to change the set from Violetta's country house to Flora's party, and the audience did not settle down quickly enough when the music started again. The contrasts between the saturated, almost lurid colors of the party scenes with the others were stark.

The realism of sex, violence, and illness throughout were unsettling. The courtesans do some 19th century version of twerking at Flora's party, the Baron does seem dangerous and scary, and having Violetta cough all throughout the piece was effective. There was some colorful cross dressing in Act II Scene 2 from the Marquis, who wears a pink tutu with his tuxedo tails and from the dancers who had bisected costumes portraying masculine and feminine evening wear on each side. Violetta does look genuinely sick in the last act (pictured, photograph by Cory Weaver) and this only added to how distressing the end is.

* Tattling *
The audience was enthusiastic and the fact that this performance was simulcast to the nearby baseball stadium certianly heightened the excitement. I did hear a cellular phone ring house left on the Orchestra Level as Pretty Yende sang "È strano! ... Ah, fors' è lui" in Act I. Also, the person in Row Q Seat 3 kept crinkling a plastic bottle at the beginning of Act II Scene 2. Though I felt annoyed by these disturbances, it is sort of nice that things are so much back to normal.