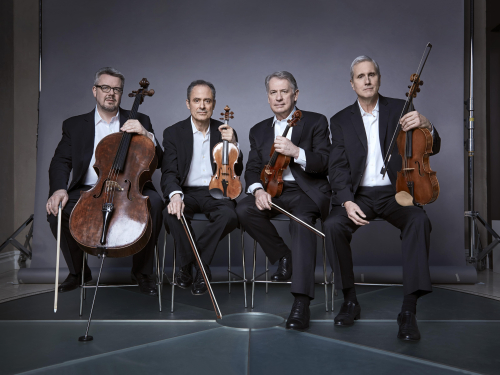 * Notes *
Last night the Emerson String Quartet (pictured, photograph by Jürgen Frank) played at Herbst Theatre as the penultimate show in the 2021-2022 season at SF Performances.

The performance started with an absolutely lovely String Quartet No. 2 in D Major by Borodin. The Allegro moderato was played with a singing tone by first violinist Philip Setzer, while the Scherzo: Allegro had a more dance-like aspect. The plaintive Noctturno: Andante is very familiar to everyone, but I loved how uniform the playing was, how the solo line started with the cello and moved in turn to the other musicians. The quartet is clearly tight and it is wonderful to hear the four voices combine so elegantly. The Finale: Andante; Vivace was bright and together.

Next was Barber's String Quartet in B Minor, Opus 11, which I have never heard but nonetheless has themes in the middle movement Molto adagio that reappear in the well-known Adagio for Strings. There was a certain strident quality to outer movements -- Molto allegro e appassionato and Molto allegro (come prima) --, and an interesting "buzziness" to the music.

After the intermission came Bartók's String Quartet No. 1, Sz. 40, starting with a lyrical Lento. The first violinist was switched to Eugene Drucker, who played gracefully. I enjoyed the aptly named Poco a poco accelerando all'allegretto, the chromaticism sounded lush and the changes in dynamics were distinct. The Introduzione: Allegro; Allegro vivace at times sounded like a swarm of wasps almost, and there was something rather moving about each of the musicians playing a particular line and then playing in unison.

The encore was a Bach chorale, with Philip Setzer back as first violinist. It was a calm, meditative way to end the evening.

* Tattling *
The Emerson String Quartet is disbanding next year, which is why I was prompted to hear the group, as I have not heard them since 2009. I have a soft spot for this quartet as their recording of Complete Beethoven String Quartets was one of the first chamber music CDs I ever purchased.

One of the ushers carried around a "Wear Your Mask" sign up and down the aisles before curtain. People were good about keeping them on throughout the performance. There were no electronic disturbances noted, only a dropped program and a few coughs.