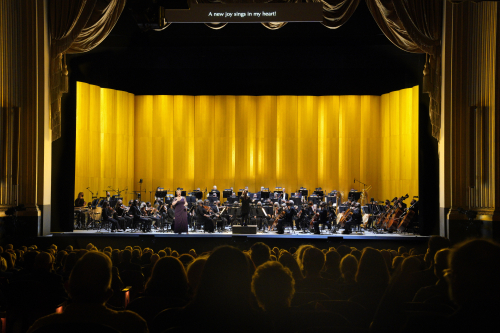 The evening started with the very jaunty overture from Leichte Kavallerie by Franz von Suppé. The brass was clear and the woodwinds lovely. This was followed by Willis-Sørensen singing "È strano … Sempre libera" from La Traviata. Her voice is incredible and well-supported, without any strain or hint of shrillness. Then came Barton with "O mon Fernand" from Donizetti's La Favorite, sounding very rich and full. She has a huge sound, so it was odd when she seemed to push it a bit in "O don fatale" from Don Carlo, the textures evoked by her voice were disquieting. We got to hear both singers just before intermission in a duet from Anna Bolena, Barton was quite plaintive as Giovanna Seymour.

The second half revisited Rusalka, which introduced us to Maestra Kim and Willis-Sørensen back in 2019. It was moving to hear the Polonaise from Act II again, the orchestra sounded sweeping and lush. Willis-Sørensen's "Song to the Moon" is no less stunning, her bright, icy high notes and opulent lower register are impressive. 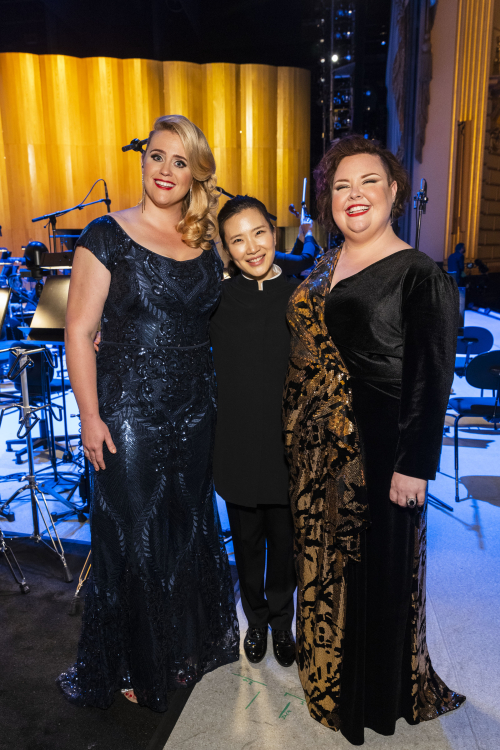 Barton was a passionate Dalila in "Mon coeur s'ouvre à ta voix," as the orchestra shimmered beneath her. I'd like to hear her sing the full opera, and likewise, when she and Willis-Sørensen sang "Mira, o Norma," it made me very much want to hear Norma with both these singers as well and with Kim (all pictured, Drew Altizer Photography) conducting.

I believe the encore was Rodgers and Hammerstein's "Climb Every Mountain" sandwiched in their "You'll Never Walk Alone." It reminded me of being a little kid, watching Sound of Music and Carousel on television.

* Tattling *
There was much of the normal opening night trappings to the performance: a huge vase of roses, the flower garlands on the boxes, speeches from the stage, and even the National Anthem. I saw nearly half a dozen regular patrons of the back balcony and it was so nice to catch up with everyone after so long.

They printed some programs this time, but most people used their phones instead. Unfortunately this makes some use their devices during the performance, so I did see the person in J 3 repeatedly look at his screen throughout. The women in front of him in H 1 and 3 were not great at keeping their masks on, they came in late, and just before the intermission ended, dashed to the drinking fountain to grab glasses of water, which they drank during the second half. Cell phone man and his companion decided to move after about 30 seconds of this, so it was easier for me to ignore his bright screen.

At least everyone was quiet, I didn't hear any beeps during the music, and no one was really around me. This was very unusual for an opening night, presumably there were more people at the free simulcast at Oracle Park. I was still anxious about being inside with so many people, and kept my two masks on the whole time. There was champagne in the lobby for everyone, but I ran away as swiftly as I could and kept well away from the crowd.

Merola's Back Home: Through the Stage Door * Notes *
Last month the Merola Opera Program filmed a series of pieces featuring the 2021 participants in the Herbst Theatre under the title Back Home: Through the Stage Door. Directed by David Paul, the 17 vignettes established a lovely warmth and intimacy.

I have a soft spot for local mezzo-soprano Nikola Printz and was so glad to hear them sing Sesto in "Son nata a lagrimar" from Giulio Cesare with fellow mezzo Jesse Mashburn as Cornelia. Printz also sang in two Mozart pieces "Ah, perdona al primo affetto" from La clemenza di Tito and "Pria di partir, oh Dio!" from Idomeneo, basically all my favorite repertoire.

Other highlights for me were soprano Catherine Goode being super creepy as the Lady with a Hand Mirror in Argento's Postcard from Morocco and soprano Celeste Morales singing Florence B. Price's "Hold fast to dreams." The latter gave me goosebumps, Morales has a beautiful, clear tone.

Tattling *
My spouse caught me watching the end of this video on our television and noted that I even do standing room at home.