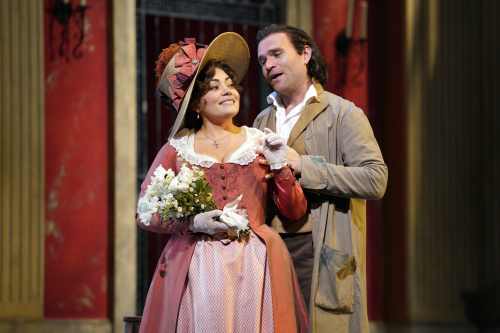 * Notes *
Live performance returned to the War Memorial stage with San Francisco Opera's Tosca (Act I with Ailyn Pérez as Tosca and Michael Fabiano as Cavaradossi pictured left; photograph by Cory Weaver) last weekend, and I managed to get to the second outing yesterday night. The cast is vivid and strong, as is the orchestra, and our new Music Director Eun Sun Kim brought out a lot of dramatic colors from everyone.

This revival of Shawna Lucey's production from 2018 felt even more immediate than the last time. The violence felt very real, from Soloman Howard (Angelotti) limping in Act I to the firing squad in Act III. Again, Scarpia's cruelty and maliciousness against Tosca in Act II turned my stomach, though Alfred Walker has an absolutely lovely voice, so very smooth and flexible. The pretty, detailed sets and costumes are also an interesting contrast to the ugliness of this brutality.

The singing was great all around. Tenor Michael Fabiano is a dashing Cavaradossi with a big, bright voice. His "Vittoria! Vittoria!" in Act II was moving, and his "E lucevan le stelle" had deservedly the longest ovation of the evening. Soprano Ailyn Pérez is quite the coquette in the title role, her voice is warm and full. Her "Vissi d'arte" of Act II was simply beautiful.

Maestra Kim conducted a buoyant and brilliant orchestra. The chaotic scene before Scarpia's entrance was really very much so, and the music did seem to roil along nicely.

* Tattling *
Everyone 12 and over had to have proof of vaccination, and the process of checking vaccine records and identification was simple.

There was barely any wait at the front entrance. Mask compliance was high where I was in the back of the balcony, I only saw one person slip their mask off for a moment to sip wine, and I was many feet away from everyone in the back row on the aisle. I was pretty uncomfortable being inside with so many people for so long, even masked, vaccinated people. I wore my two masks for the entire time.

During the second intermission someone loudly scolded a young man about his feet being on the back of the chair in front of him. The seats are new, and I guess they are more plush than the ones before, but I'd still rather stand. 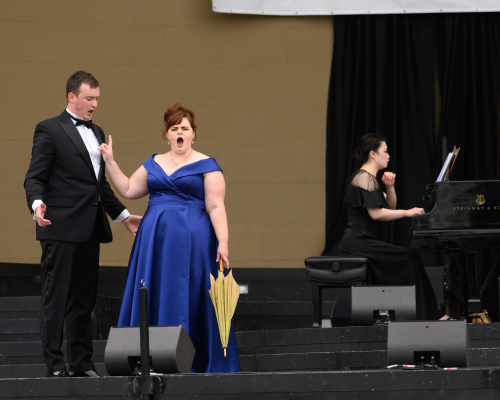 * Notes *
The Merola Grand Finale took place in person on July 31, with a filmed version released to donors on August 20. Directed by Merola Stage Director Audrey Chait, the performance at the Bandshell in Golden Gate Park looked and sounded delightful.

The recital featured five singers accompanied by two of the apprentice coaches on piano. Each piece was introduced by Ms. Chait, who seems personable and looked very sprightly in a bright red suit. I liked her stage direction which employed simple props such as a parasol or broom, it wasn't clunky or too elaborate.

My favorite singers are definitely the mezzo-sopranos. Right away Gabrielle Beteag (Ino) and Jesse Mashburn (Athamas) had my attention with the duet "You've undone me" from Händel's Semele. Mashburn's voice has a rich sweetness, and Beteag's is a touch darker but also wonderfully warm. Chait had them get uncomfortably close to each other at points, which was dramatically effective.

Mashburn was also great with bass-baritone Andrew Dwan (pictured with pianist Shiyu Tan, photograph by Kristen Loken) in "Ai capricci della sorte" from Rossini's L'Italiana in Algeri. Dwan is a good actor with a clear presence and good facial expressions.

Tenor Victor Cardamone may have been less charismatic, but his voice is beautiful, very strong and clear when singing "Au fond du temple saint" from Bizet's Les pêcheurs de perles with Dwan. I was less keen on the soprano, Catherine Goode, whose "Glitter and Be Gay" started off with an incisive shrillness but grew more bird-like as she continued. I did like her as Frasquita in "Mêlons! Coupons!" with the two mezzos.

The last piece of the recital was "Ah, sweet mystery of life" from Victor Herbert's Naughty Marietta, an operetta from 1910 that was made into a film in 1935. It brought me to tears for some reason, all the singers participated as pianist Anna Smigelskaya played, even pianist Shiyu Tan joined in the singing at the very end. Somehow it was unexpected but also apt, and I enjoyed the scattering of dark red rose petals that occurred three times throughout the song.

Tattling *
Since this performance occurred outdoors, the singers all had discreet microphones attached to their heads.