What the Heart Desires Recital 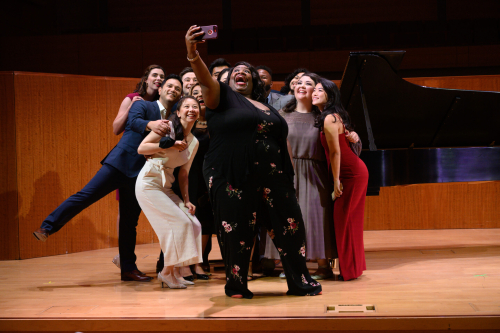 The recital consisted of six singers accompanied by the apprentice coaches on piano. Nearly all the songs were in English. The new crop of Merolini all have very powerful, clean voices.

Especially impressive is tenor Edward Graves, his soaring notes in Henry Thacker Burleigh's "Among the Fuchsias" were imposing and his rendition of Undine Smith Moore's "I want to die while you love me" was stirring. I also liked hearing baritone Laureano Quant again, he was in the program two years ago, and was the only low voice of the group here. He sang a piece he wrote himself, "Ahora hablo de gaitas," Mohammed Fairouz's "After The Revels," and Viet Cuong's O Do Not Love Too Long."

Mezzo-soprano Gabrielle Beteag had much appeal in Ian Cusson's "Where There's A Wall," and pianist Shiyu Tan did will with all the percussive effects the piece requires. Soprano Celeste Morales both opened and closed the performance with vigor, beginning with Robert Owens' "Havana Dreams" and ending the afternoon with Maria Grever's "Jurame."

Tattling *
It was great to hear so many different composers that don't normally get programed. That said, a few of the pieces did not do it for me, the text of Chen Yi's "Bright Moonlight" sounded like a word salad while Stacy Garrop's "What Can One Woman Do?" whose text is from Eleanor Roosevelt was rather declamatory as opposed to lyrical.