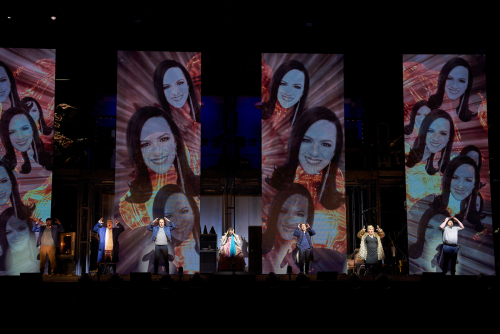 Maestro Roderick Cox made a fine debut conducting the 18 members of a mostly masked and socially-distanced orchestra from a tent behind the stage. Despite these challenges, the proceedings were lively and bright, only the horn sounded hesitant at the April 24 performance I attended. It made me really look forward to hearing all the musicians again back at the War Memorial, and hopefully Cox gets a chance in a proper orchestra pit with them.

The opera is presented as a rehearsal at our beloved opera house, and we hear Managing Director of Production Jennifer Good as the Stage Manager, threading together the arias and ensembles as they unfold in dressing rooms, rehearsal spaces, and on the opera stage. The set was meant for the Fidelio production that was to have been performed last September, and is repurposed here with lots and lots of video projections of the San Francisco opera house. It is definitely busy, there are four screens that can be moved about, but it works. The images read well from afar and make the drive-in aspect of the production feasible.

It was so pleasing to see and hear so many beloved and familiar opera singers in this Barber, nearly the whole cast has been in the Merola Opera Program. I've heard mezzo Catherine Cook as Berta dozens of times, but she always brings verve to the role. Her sound is incisive and completely distinct from any of the Rosinas she's been cast with. Bass Kenneth Kellogg made the most of Don Basilio's "La calunnia," his deep, rich tones are impressive. Bass-baritone Philip Skinner is a very amusing Dr. Bartolo, his voice is reliable.

Mezzo-soprano Daniela Mack (Rosina) and tenor Alek Shrader (Almaviva) are adorable little lovebirds on and off stage, and their voices are both well-suited to Rossini. Mack is visibly pregnant, and I felt exhausted for her, but she sang with vivid lightness and warmth throughout. Baritone Lucas Meachem is also completely perfect in the title role, his personable Figaro has a lot of appeal. The diction throughout the performance was clear from everyone, and I did not have to read the supertitles at all.

I do wish there were a couple of matinee performances of the production, though only 90 minutes long and performed without an intermission, the 8pm start time is too late for my small children, who would have loved the performance with all the sight-gags and color. But perhaps the projections would not have shown up well during daylight.

The Covid protocols were strict: no being outside unless going to the restroom, masks need to be on, and vehicles were physically distanced. There were a few cars whose lights turned on at times unexpectedly, but for the most part there were fewer distractions than from a normal opera audience. I really liked that they asked right away that people not honk their horns after numbers and gave everyone glow sticks to show their appreciation for the music.