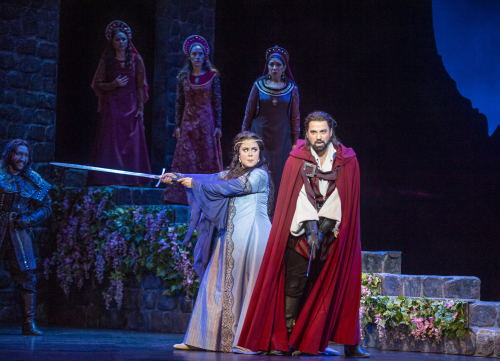 * Notes *
Opera San José is in the midst of an appealing run of Il trovatore. The traditional production cleanly moves through the scenes and has a hint of humor plus lots of robust singing and playing.

Though the synchrony of the brass-heavy orchestra and the singers was not always focused, the performance yesterday had much charm. The plot of Il trovatore is famously absurd, and there were definitely moments in which director Brad Dalton leaned into this, as seen when the Count di Luna and Manrico fight over Leonora (pictured, photograph by David Allen). Leonora grabs a sword herself and the effect is pretty amusing. The set is simple, stone stairs represent everything from a garden to a dungeon, but it works with the help of super-titles.

There is much powerful singing. Baritone Eugene Brancoveanu gave a nuanced performance as the Count di Luna, his rich warmth can sound both angry and plaintive. Likewise mezzo-soprano Daryl Freedman impressed as Azucena. Her mad recounting of what happened to her mother and her baby son were chilling, while she had a tender sweetness in her duet with Manrico "Ai nostri monti ritorneremo" in the last act. 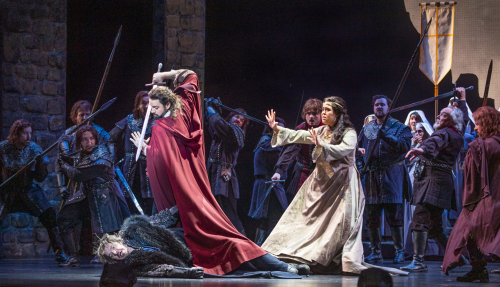 Tenor Mackenzie Gotcher cuts a fine figure as Manrico, and his singing is strong, especially in volume. Soprano Kerriann Otaño also has a big voice, with a wide vibrato and drama to spare. Her Leonora is very spirited and her low notes are especially beautiful.

* Tattling *
The audience was very much engaged with the performance, though someone's phone did ring during a quiet moment when the Count di Luna sang near the end of the first half. I had to giggle when the ladies behind us speculated on what would happen next, prognosticating that "someone must die." 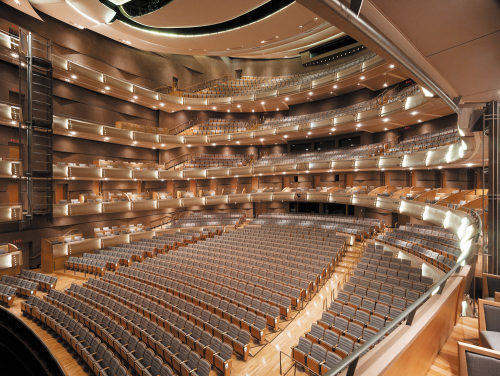 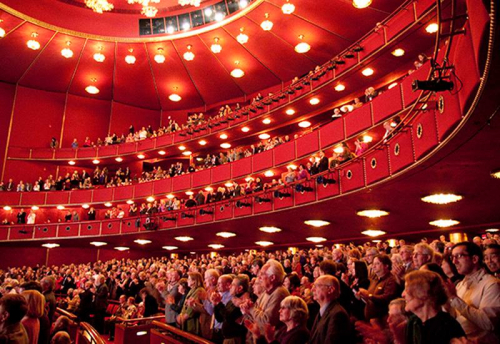 The 2020-2021 season at WNO was announced today. Elkhanah Pulitzer makes her WNO directorial debut with Nixon in China, and Renée Fleming does too with Così fan tutte. 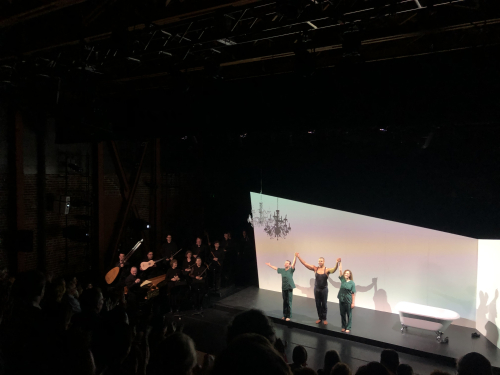 * Notes *
The production of Aci, Galatea e Polifemo that has a final performance tonight at ODC Theater in San Francisco is well worth a second viewing. National Sawdust and Philharmonia Baroque Orchestra have successfully pulled off a disquieting and dark vision of Händel's serenata.

This time around I was in the eighth row rather than the first, and it made it easier to appreciate Mark Grey's video art, which starts off with Delft blue tiles depicting sea life and ships and switches to various eye irises, water, earthworms, and blood. While a step up from jewelry advertisements or screensavers, these images could be a bit on the nose, as when the letters of Polifemo's name show up garishly and slowly in gold on the screen as he makes his entrance or when a seagull flaps as Aci sings about birds.

I was, however, able to make more sense of the action on stage from further back, and it was easier to see the internal logic of this world of violence that surrounds a bathtub. I also was better able to see the interplay of shadows, which was very striking at times.

Bass-baritone Davóne Tines (Polifemo) clearly has the hardest role, the range dramatically and vocally required is definitely greatest of the three. He seemed in better voice yesterday than a week ago, he never cracked even in the highest notes and his low ones were less growled. As Aci, soprano Lauren Snouffer gets thrown to the wall rather a lot, but she always sounds perfectly clean and lucid. Countertenor Anthony Roth Costanzo's Galatea is strong, his voice is very smooth from top to bottom. All the parts are physically demanding and all gave committed performances.

I loved hearing Maestro Nicholas McGegan and the orchestra again. There were some lovely soli from the guitar, the violin, and the oboe. It was fun seeing how the dolphin and whale sounds were made, col legno battuto on the cello for the former and a sliding note from the bass for the latter.

* Tattling *
The young woman next to me in Row H Seat 18, probably a voice student attending with her classmates, laughed quite a bit during the opera and got an intense fit of giggles as the countertenor thrashed against the tub toward the end of the piece. She shook as she suppressed her laughter, but made very little noise.