Wozzeck at the Met 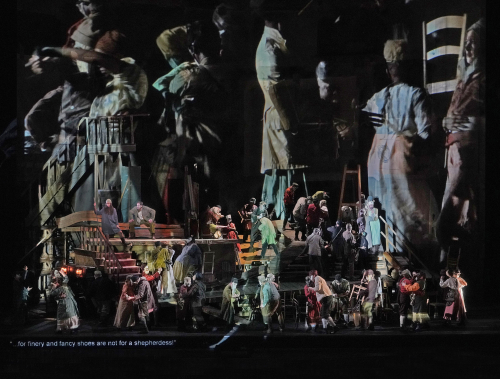 * Notes *
William Kentridge's latest production of Wozzeck (pictured, photograph by Ken Howard) at The Met perfectly captures the nightmarish quality of Berg's piece. The opening yesterday evening was one of immersive theater and absolutely beautiful playing from the orchestra.

The set is dark, filled with projected drawings, animations, and video footage of human movement. The beauty of the images really puts to shame much of the screensaver-like video projections we often see on the opera stage.

There are a couple of actors dressed up as soldier/nurse hybrids complete with gas masks, caps with red crosses, and aprons. It was as if Kentridge's images had come to life and the effect is unsettling.

Maestro Yannick Nézet-Séguin conducted a clarion orchestra, the shape of the music apparent and striking. The banda that comes on stage through a wardrobe did particularly well. The chorus also was great, sounding cohesive and embodying the aesthetic of the production.

The cast is strong, as one would expect. Bass-baritone Christian Van Horn is malicious but still comic as the Doctor, matched well by the incisive tones from tenor Gerhard Siegel as the Captain. Tenor Christopher Ventris is a bold Drum Major, appealing but his cruelty comes through clearly in Act II, Scene 5, when he taunts Wozzeck.

Mezzo-soprano Tamara Mumford (Margret) has some wonderfully deep low notes, a fine contrast with soprano Elza van den Heever (Marie). Van den Heever showed her range, she could be terrifying, almost harsh and sweet and even close to angelic. Most impressive is baritone Peter Mattei in the title role. His warm sound is engaging, and his pathos made Wozzeck seem very human. 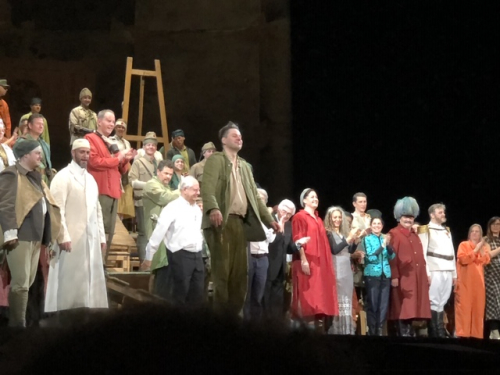 * Tattling *
We sat in Row B, all the way to the right of the house. After 8pm, when the performance was supposed to begin, a woman boldly sat in front of us, where one of the staff usually sits to guard a door to the orchestra pit. The employee directly asked to see the person's ticket, and she made many excuses, even lying that she did have that seat.

There was some light talking, and someone loudly hushed the offenders at least once. Some people definitely left early, even though there was no intermission.

The Magic Flute at the Met 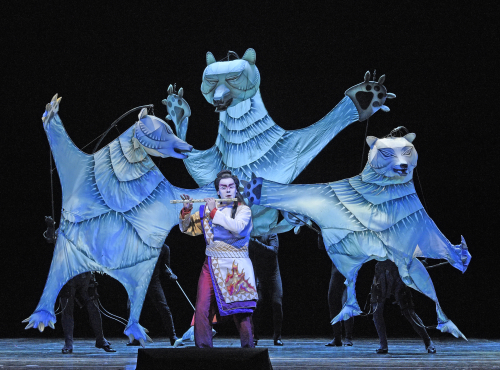 * Notes *
The Met's holiday presentation of The Magic Flute (David Portillo as Tamino, photograph by Karen Almond ) is completely charming. The abridged version in English is less than two hours long, and perfect for children.

I saw the full version of this production in German more than twelve years ago, and vividly remember Julie Taymor's cunning use of puppetry. It holds up well, my five-year-old didn't say a word for the entire performance.

He loved the bears dancing when Tamino plays the flute, the sight gags of lobster and spaghetti with Papageno, and the flamingos in "Ein Mädchen oder Weibchen." J. D. McClatchy's translation is direct and immediate. The illustrated synopsis was helpful, this might be a good idea for all operas, but really made the action clear to my son, who has seen the DVD version of this production twice, but liked having a refresher on what was going to happen.

Maestro Lothar Koenigs conducted a sprightly and beautiful orchestra, the only fuzzy note coming from the horns during the trial by fire. The chorus was lovely and transparent.

The cast is very good. Tenor Rodell Rosel is very funny as Monostatos, the crowd adored him with his bat wings and eight little claws. The audience also loved baritone Joshua Hopkins as Papageno. He has a very sympathetic presence, and his dance moves are extremely funny. His sound has a delightful lightness. Bass Soloman Howard is a noble Sarastro. He is creaky, but not in an unpleasant way.

Soprano Ying Fang (Pamina) is limpid and bright. Her voice showed no strain at all. Soprano Kathryn Lewek is almost brassy as the Queen of the Night, but not at all shrill. Her metallic sound was pronounced in her first aria and more bird-like in her second. Tenor David Portillo is a fine Tamino, his voice is so open and clear. 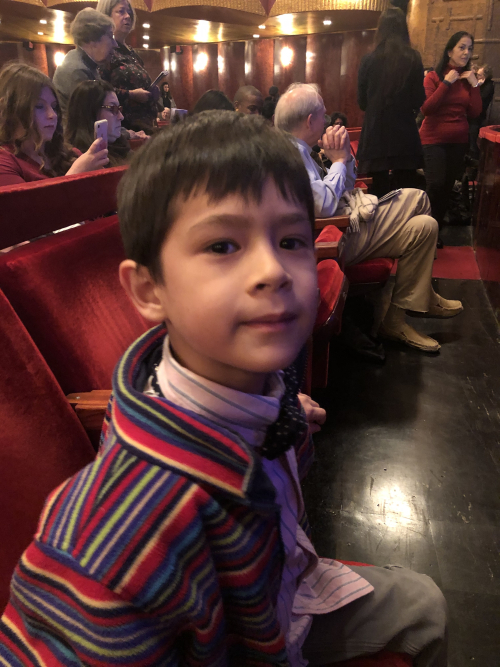 * Tattling *
When the 2019-2020 season was announced, I was very keen on going to Wozzeck, as the production ins from William Kentridge. Somehow I convinced my spouse that we should have Christmas in New York City, and since our five-year-old (pictured) loves Mozart, I thought it was a good opportunity to go to The Magic Flute with him. Since he was very much into San Francisco Opera's Hansel and Gretel last month, I wasn't too worried about if he could sit still for one hour and 45 minutes. He himself was a bit concerned, but we took the subway to Lincoln Center, had a chocolate chip cookie on the concourse level of the theater, took the elevator to the top of the house, and walked back down to our seats in the front row of the orchestra. I sat in Row A Seat 108, which is obstructed by the conductor and let my child enjoy the better seat.

Theo was nervous about the snake in the beginning, and asked if it was acceptable to close his eyes for that part. I told him it was fine, and this is the first opera performance we've been to together that he hasn't ended up on my lap. It was so sweet to hear him laugh at Papageno and to share this music with him, it had me in tears by the end of the opera. As soon as we got back to the place we are staying in New York, Theo excitedly told his little sister that he had seen "the real Papageno."

Since we were so close to the stage, even the small amount of talking from audience members was easy to ignore. I also noticed some snoring from the person on the other side of Theo, but this was very brief.

There are two more matinee performances this Saturday and next Thursday. The weekend performance also features an open house. 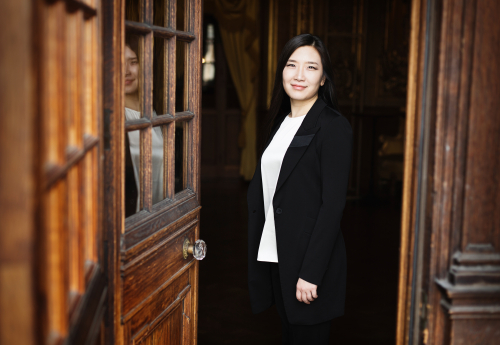 San Francisco Opera's next music director is Eun Sun Kim (pictured, photograph by Nikolaj Lund). The company has been without a head conductor since Nicola Luisotti left in 2017.

She is one of the only female music directors of a major opera company in the United States, other than Lidiya Yankovskaya, who has been Chicago Opera Theater's music director since 2017.

It is really nice to see SF Opera put a woman of color into a leadership position, after creating a Department of Diversity, Equity and Community last summer and the various attempts at "diverse" operas such as Girls of the Golden West and Dream of the Red Chamber. Kim is from Seoul and studied composition and conducting there as well as in Stuttgart.