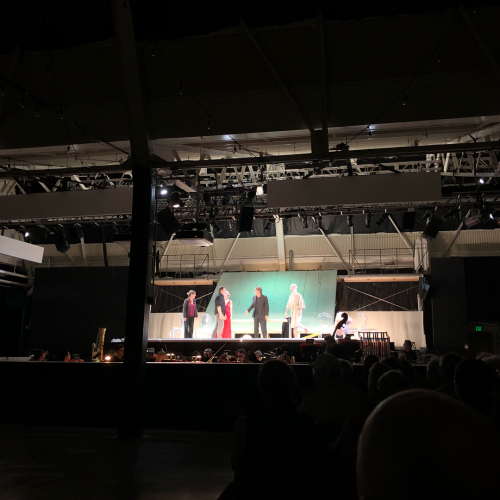 * Notes *
West Edge Opera's third production this summer is Luca Francesconi's Quartett, based on the 1980 play by Heiner Müller, which in turn is based on Les Liaisons dangereuses. Both music and drama here are utterly disturbing.

The piece debuted at La Scala a scant seven years ago, but has seen great success, and has been done in Vienna, London, and even Buenos Aires. The work requires only two singers playing ex-lovers Marquise de Merteuil and the Vicomte de Valmont, but they role-play each other as well as virtuous Madame de Tourvel and virginal Cécile de Volanges, victims manipulated by the pair.

Director Elkhanah Pulitzer keeps everything clear by use of onstage costume changes, even though there are many scenes in this one act opera, and the English text can get lost in the layers of music. Chad Owens' set is unique: there are two dressing rooms on the left and right above two showers, the dressing rooms can be assessed by either ladders or a steeply raked platform. In the center is a long dining table for eight and around the orchestra runs a strip of stage as well.

The characters go around and around in circles, repeating the same patterns several times in the 85 minute piece. They are powdered white from head to toe, but the physical demands of the staging which include sliding down, climbing up, and running on that steep incline definitely wore the makeup off. The costumes, almost all white, had a lot of impact. I especially liked the imposing Marquise's nearly vertical tulle and ostrich feather head dress.

Pulitzer highlights the vanity and cruelty of the pair, the Marquise has a phone that she takes photos with that are projected onto the incline and often garishly reappear in the negative. There is much sex and violence, it is all highly artificial in this staging, but somehow the grotesqueness is very effective.

The music seems difficult, Francesconi studied with Karlheinz Stockhausen and Luciano Berio, and the piece requires electronics, a live orchestra, and a pre-recorded one with a chorus. There was a lot of shimmers, buzzes, and elaborate percussion. I spent a lot of time looking at the supertitles, as it could be quite hard to understand the words, which come from the play but translated into English and expounded on by the composer. The musicians, lead by Maestro John Kennedy, looked like they were concentrating intensely, and as far as I could tell everything came off the way it was supposed to. Soprano Heather Buck and baritone Hadleigh Adams both sounded and looked great. Buck's voice could be angelic or dangerous, while Adams has a pleasant, lyrical tone.

* Tattling *
Someone outside the theater was having a loud conversation on her cell phone right before the music started, causing a few giggles from the audience members, otherwise they hardly made a peep, so intent were they on the opera. 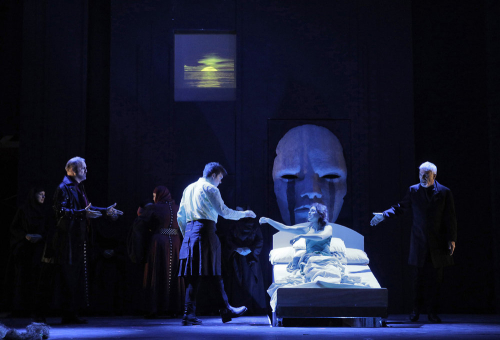 * Notes *
Nomadic West Edge Opera is performing this summer in yet another alternative space, this time in Richmond at the Craneway Conference Center, once a Ford plant. The opening show is Debussy's very wonderfully weird Pelléas et Mélisande. The music is utterly beautiful, the singing was very good, and the production sleek and inventive.

The Craneway is right on the water, and has a glorious view of San Francisco. The building houses the Rosie the Riveter Museum, as it was the site of shipyards with female workers during World War II. A space upstairs was transformed into a theater with much black fabric, platforms, and extensive structures for lighting, which needed its own generator as the building's electrical system was inadequate for this. Unlike previous venues in the last few years, this one does have running water and real bathrooms.

Director Keturah Stickann, very much in keeping with this opera company, did a lot with very little, and her production worked incredibly well. The set (pictured, photograph by Cory Weaver), designed by Chad Owens, is a wall with five openings, and it was impressive how these were used as places to project onto screens or serve as doors or bring in props to the scene. The costumes had a medieval look but were often festooned with rivets.

Maestro Jonathan Khuner kept the small orchestra together, and created a big sound. The singing was lovely. Mezzo-soprano Kendra Broom is an otherworldly Mélisande, her high notes soar and her low ones are deeply rooted. She also was mysterious and nymph-like in her acting. Her Pelléas, tenor David Blalock, may have been a bit more wooden, but his voice is bright and strong. In contrast, baritone Efraín Solís truly embodied the role of Golaud. From grave and sad to crazed and jealous, Solís was completely convincing, and he sounded great, very warm and sympathetic.

* Tattling *
There were technical difficulties with one of the four supertitle screens which made the opera start late. It was not resolved and those in that area had to move to see the titles.

A young woman in Row D 26 took a picture of Act III, Scene 1, when Mélisande's hair spilled out of the tower. The young man behind her texted. The woman next to me fell asleep during an intense moment of the opera in Act II.

I wish I could go to this opera again, there are two more performances on August 12 and 17, but am overbooked and will be out of town. 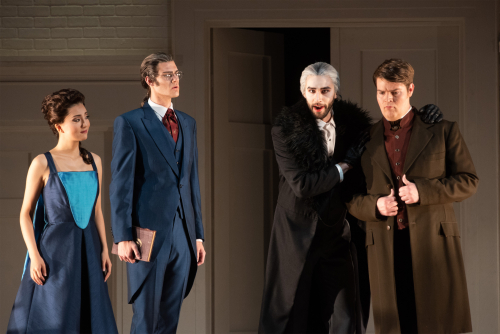 * Notes *
The Merola Opera Program's second opera this year is The Rake's Progress, performed at the San Francisco Conservatory of Music on August 2 and 4. The singers (pictured left, photograph by Kristen Loken) gamely performed this challenging music in a sleek Baroque meets modern production that suits Stravinsky's music.

The stage is clean and elegant, a simple white wall with five doors topped with pediments, a raised platform in front, some space on the sides for chairs and the chorus. The costumes matched. I especially loved Anne Trulove's outfit, a navy dress with bright blue accents in the shape of a Baroque gown, but no frills and a short hem, worn with sturdy brown boots. The chorus members had many different outfits for their many roles, there was a lot of drag, both for men and women. Scene changes are managed with props, especially inventive was the use of a huge doll house, which is the conveyance for Baba the Turk in Act I and the stone/bread machine in Act II.

Unsurprisingly, there were a lot of big voices here. The chorus made up for its small size by being very loud and sang in a unified and cohesive manner. Even the smaller roles are excellently cast, tenor Addison Marlor really hammed it up as the auctioneer Sellem. He was very funny. Also hilarious is mezzo-soprano Anne Maguire as Baba the Turk. Her sound is very deep, almost gravelly, and she has the right self-possession for the role.

Soprano Meigui Zhang's wide-eyed Anne Trulove has a supple, gleaming sound. Tenor Christopher Oglesby is likewise fine as Tom, his voice is rich and warm without strain. Best of all though may have been baritone Jacob Scharfman as the villainous Nick Shadow. His voice and movements conveyed his dangerous nature, even when being very obsequious at first.

* Tattling *
It seemed that the audience was not clear on the libretto of the opera, because they seemed to clap at the wrong time more than once. This may have contributed to the Act I harpsichordist missing a cue, and also delayed the epilogue.