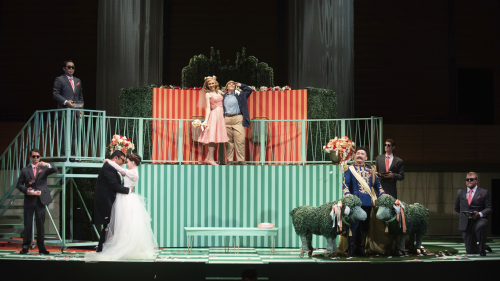 * Notes *
The first of two operas from the Merola Opera Program this summer is the rarity Il Re Pastore at the San Francisco Conservatory of Music on July 19 and 21. The lighthearted production directed by Tara Faircloth suits the early Mozart very well, as do the young singers (pictured left, photograph by Kristen Loken). Maestro Stephen Stubbs conducted with warmth and kept everyone together.

The absurd plot of Il Re Pastore involves Alexander the Great (Alessandro) conquering the kingdom of Sidon, deposing a tyrant named Stratone, and reinstating the rightful heir Aminta, who has lived as a shepherd and has no idea that he is royalty. Alessandro wants the tyrant's daughter Tamiri to marry our titular pastoral king Aminta, but unfortunately he loves shepherdess Elisa, while Tamiri loves Agenore, a Sidonian aristocrat.

The cheery music is unmistakably Mozart's, even if he wrote it when he was only 19. The small orchestra is exposed, and there was a violin out of tune, but the conductor did a fine job keeping the singers and musicians together without being square and dull.

The set is essentially a staircase and two big curved walls covered in greenery on one side and stripes on the other. These were moved by male supernumeraries who were security for Alesssandro. Everything seemed to be mid-century, and the costumes very cunning. There were many sight gags, including topiary sheep, dancing with umbrellas, and throwing petals with deadly seriousness.

The singers, all with high, bright voices, were ebuillent. The part of Aminta was originally cast for a soprano castrato but was played here by female soprano Cheyanne Coss in men's wear. Coss has a clear sound that is well-grounded and her "L'amerò, sarò costante" in Act II was especially beautiful. Her Elisa, soprano Patricia Westley has a very different voice, though also sweet, has a metallic tang, and she both looked and sounded exceedingly girly. Mezzo-soprano Simone McIntosh's Tamiri was winsome, her voice is brilliant and crystalline. Her Act II aria ""Se tu di me fai dono," in which she scolds Agenore for giving her away was one of the highlights of the evening.

Tenor Charles Sy has a plaintive voice which works for long-suffering Agenore, he is physically attacked in this production by both Elisa and Tamiri. Tenor Zhengyi Bai (Alessandro) also has a pretty voice, but definitely sounds different than Sy, more robust and with a great openness.

* Tattling *
A prominent Bay Area music critic had to be re-seated next to me in J 3 because his original seat was broken. Unfortunately, the people next to him in J 5 and 7 talked to the couple in front of them. He moved to another seat so that he could sit with his date after intermission, but so did the noisy pair that had been next to him.

A man in Row F Seat 101 put an earbud into his ear at some point in Act II and looked at his cellular phone for several minutes. 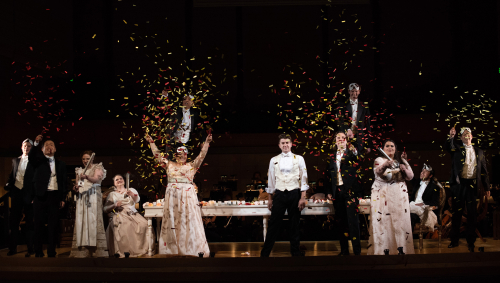 * Notes *
The Schwabacher Summer Concert at SFCM on Thursday kicked off the 2018 Merola Opera Program's season. This is when we get to hear the more unusual voices selected for this opera training program, the ones that didn't quite fit into the two operas that will be performed in July and August.

The most striking singers were definitely both sopranos. In the first half, soprano Marlen Nahhas gave a passionate account as Giorgetta in some rather passionate scenes from Puccini's Il tabarro. Her voice is searing. Tenor Christopher Colmenero (Luigi) sang "Hai ben ragione" with fire. Baritone Jaeman Yoon was suitably tormented as Michele, the texture of his sound was unsettling.

The star of the second half was certainly soprano Kendra Berentsen as Leila from Les pêcheurs de perles. Of the four operas that were excerpted, the selections from Bizet's opera were most scattered, parts from each act appear. So we got to hear the lovely "Comme autrefois dans la nuit" from Act II in which Leila realizes she loves Nadir and the bit in Act III when she tries to save her love but only angers Zurga. Berentsen really got to show off her emotional range. Both WooYoung Yoon (Nadir) and SeokJong Baek (Zurga) gave perfectly fine performances as well, and it was great to hear the famous duet from them.

The evening started with the first scene of Vanessa and ended with the last one from Don Giovanni. The orchestra, conducted by Kathleen Kelly, was upstage behind the singers, and there were serious synchronization problems, especially by the end. All our young singers are quite loud and in the rather small space. They very gamely put on masks and got up on furniture as directed by Aria Umezawa and the blasts of confetti (pictured, photograph by Kristen Loken) at the end were wonderful fun.

* Tattling *
The audience was attentive but certain people were unable to keep their thoughts to themselves.