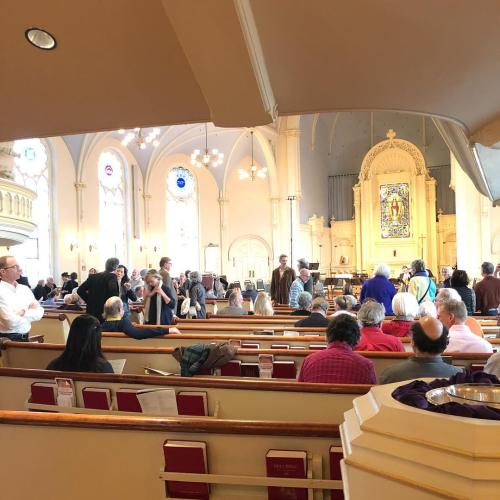 Tenor Aaron Sheehan has a bright sound as the Evangelist. Though much of his part is obviously on the declamatory side, he has a lovely legato as demonstrated at the end of "Er leugnete aber." Baritone Jesse Blumberg has a particularly fine voice also, and his Christ is very dignified.

My favorite was certainly contralto Robin Bier and loved hearing her strong, tawny tones in "Von den Stricken meiner Sünden" in the first half and "Es ist vollbracht!" in the second. Soprano Hélène Brunet sounded as pure and lovely as ever in her arias.

This performance, conducted by Jeffrey Thomas, did seem to start off with less precision than usual. The woodwinds sounded unfocused, but the orchestra was much more together by the end of the first half.

* Tattling *
There was very little extraneous noise from the audience, at least around me in Row K Seat 116. It was rather crowded, both the people around me expressed concern for me, especially because the person in front of me was at least a foot taller than me. I did not mind not seeing that much, and was able to concentrate well on the music. 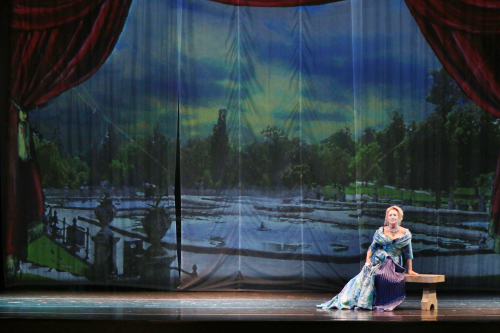 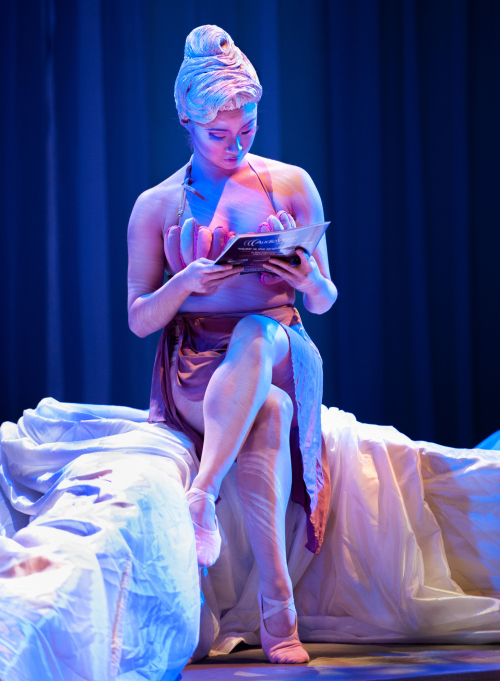 * Notes *
Opera Parallèle is performing a very charming production of Leonard Bernstein's Trouble in Tahiti again, this time presented with Jake Heggie's At the Statue of Venus as a single narrative. As an added bonus, we heard some Bernstein songs from West Side Story as people milled around the museum setting for the Heggie piece, and even Charles' Ives The Unanswered Question with dancing from living statue Steffi Chong (pictured, photograph by Steve DiBartolomeo) as Venus.

Maestra Nicole Paiement conducted with elegance and spirit, the orchestra sounded absolutely great. The only time things felt a little off was when baritone Eugene Brancoveanu was a bit ahead during "Something's Coming," when he was up above the stage in the Center Terrace of SFJAZZ's Miner Auditorium and Paiement was not conducting.

At the Statue of Venus involves only one mezzo, in this case Abigail Levis (Rose), singing as she waits for her blind date to arrive. The character is extremely neurotic and insecure, she goes on and on about how she shouldn't have worn slacks. Levis has a pretty voice, clear and bright. She's double cast with Renée Rapier, whose sound is perhaps richer and warmer, it's hard not to be curious about what Rapier's take is on the role. Steffi Chong's Venus, statue though she is, gave a sympathetic performance as Levis anticipated who was coming to meet her. I also really liked Sherry Parker's mixed media collage projected on the upstage screen that comprised most of the museum's works. Her work never could be mistaken for a screen saver or video game scene.

The Trouble In Tahiti is much like what we saw in 2013, when the company performed it at Z Space with Samuel Barber's Hand of Bridge, though Venus wanders in for Scene IV, as after Sam and Dinah run into each other. Director Brian Staufenbiel's production uses a similar quartered turn-table set with a kitchen, an business man's office, an analyst's office, and a gym. The theater ends up being up above in the Center Terrace where there is a large screen showing projections of little perfect houses falling into place on lawns and amusing print advertisements of the period. 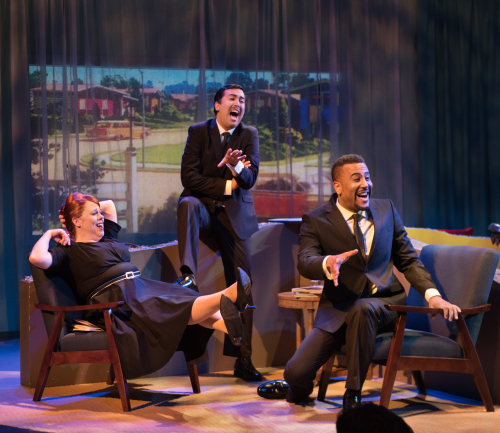 Krista Wigle, Andres Ramirez, and Bradley Kynard (pictured, photograph by Steve DiBartolomeo) are jaunty as The Trio, cheerily singing about suburbia. Eugene Brancoveanu, who along with Wigle and Ramirez reprises his role from 2013, is as funny as ever as Sam, he can be callous and impatient yet has a roguish warmth. Abigail Levis is lovely as Dinah, never shrill, and it was easy to feel compassion for her character.

* Tattling *
Many of the audience members on the left side of Row L seemed to chatter quite a lot. 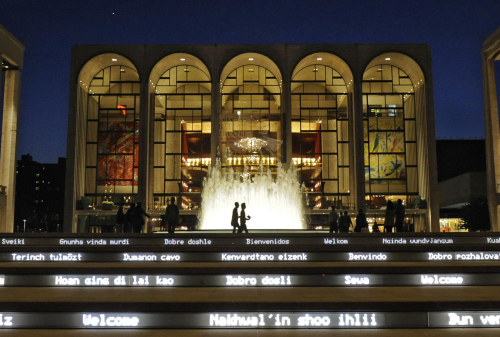 The Met announced the 2018-2019 season today, the first for Yannick Nézet-Séguin as Music Director. The new productions are Samson et Dalila, Nico Muhly's Marnie, La Traviata, and Adriana Lecouvreur (which is a co-production with San Francisco Opera, among others). Philippe Jordan conducts the Lepage production of Der Ring des Nibelungen, which stars Christine Goerke as Brünnhilde. 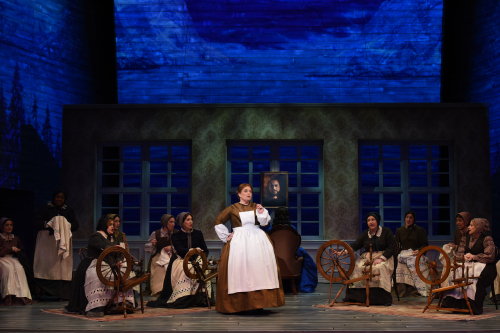 Steven C. Kemp's set features wood planked walls that took on projections by Ian Wallace. Most of the time these were simple backdrops of the Norwegian coast, very cobalt blue and icy white. In the more supernatural and ghostly scenes the projections would illustrate the text. We saw fire and annihilation when the Dutchman sings ""Die Frist ist um, und abermals verstrichen sind sieben Jahr," for instance.

Brad Dalton's direction is straightforward and unambiguous, he gets in the humor of both the Steersman and Daland, and he created dramatic tension in Act II by having Senta face upstage so long, with only her black curls and the folds of her deep blue gown visible. The last scene was perhaps the most abstract, it was also blinding, but it was unequivocal and effective.

Maestro Joseph Marcheso had the orchestra go all out, the music was powerfully played. There were some beautiful shimmery and clear moments, but mostly it was vibrantly thunderous. This seemed to pose no problems for the singers, who could match the volume perfectly well. The chorus had a little trouble staying exactly on beat in Act III, but sang with force and charm.

This opera is nicely suited to the young singers cast. Tenor Mason Gates' Steersman was very sweet and bright, and he can walk on his hands and even did a backwards somersault in Act III. Bass Gustav Andreassen was an amusing and lovable Daland. His German was easy to understand, though the rest of the singers were also intelligible. Soprano Kerriann Otaño makes for a winsome Senta, her voice is lovely and very strong. Baritone Noel Bouley's Dutchman felt grave and human.

* Tattling *
This audience was obviously the normal Opera San José crowd, so full of excitement for the singers and perhaps less concerned about Wagner. It was refreshing, I don't think I've ever heard an aria applauded in the middle of Der fliegende Holländer, even the performers looked slightly confused when this happened near the end of Act II.

The woman in Row E Seat 102 was (naturally) less tolerant of a very noisy person in Seat 104 of the same row who exclaimed loudly throughout the performance. She had to switch her seat with her companion, who had the aisle seat further away from the offending patron. 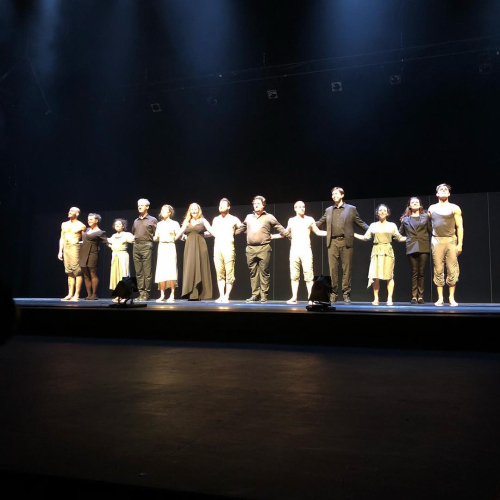 * Notes *
Following a decades long tradition, Cal Performances presented yet another fascinating hybrid work, this time a combination of contemporary circus arts and Baroque opera last weekend from the Australian troupe Circa.

Those expecting to hear Monteverdi's Il Ritorno d'Ulisse in patria might have been taken aback to hear Quincy Grant's 75 minute arrangement, which included arias from the opera along side electronic stylings composed by Grant himself.

The spare ensemble only had four musicians: cellist Pal Banda, violinist/violist Nicholas Bootiman, harpist Cecilia de Santa Maria, and music director/keyboardist Natalie Murray-Beale, who really did seem to have everything perfectly in hand as she moved seamlessly from one genre to another. The two singers, mezzo-soprano Kate Howden and baritone Benedict Nelson, were amplified, heightening the sense we were hearing something rather different than Monteverdi's work.

The performance was much more about theatrics of the body than of music and tellingly, the audience often clapped over the music. The seven acrobats featured were hard to look away from, and seemed to push the very boundaries of the body to disturbing and devastating effect. Bodies were flung against the floor or against an upstage wall, balanced upon one another or on ropes, loops, and a swing. Bridie Hooper had a segment in which she seemed to be fighting her own arm, she seemed almost possessed, yet this was somehow engrossing and even beautiful.

* Tattling *
In the second row, I was right behind a fellow blogger, who was of course very quiet. The woman next to me (FF 107) talked a little at the outset but was silent for the rest. The man next to my date (FF 110) had his phone out for much of the performance.