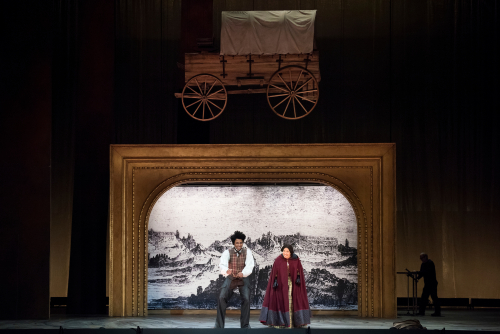 * Notes *
Last night's world premiere of John Adams' Girls of the Golden West (Act I Scene 1 pictured, photograph by Stefan Cohen) at San Francisco Opera had some gorgeous singing and playing. But neither the music nor the artful, elegant stagecraft could save a stilted and tedious libretto.

Tellingly, the best moment of the opera is without words. The music for Lola Montez's Spider Dance held my attention after the monotony of lines and lines of narration from Gold Rush era primary sources. It helps that ballerina Lorena Feijóo looked fantastic in her red, white, and blue ruffles and danced with absolute conviction.

The playing seemed very much together under the direction of Maestro Grant Gershon, and the woodwinds sounded especially lovely. The chorus too had a cohesiveness to be admired. In fact all of the singing and acting was impressive, from the supernumerary miners and dancing girls up to the youthful leads.

Much, if not all, of the opera's text comes from original sources rather than from librettist/director Peter Sellars, and as such, there is a lot more telling than showing. There is little in the way of dialogue and it isn't always easy to understand what exactly is going on since the characters sing at us rather than interact with each other. This is especially prominent for Dame Shirley, whose words are all her own, drawn from her letters. In this leading role is soprano Julia Bullock and her fine voice seems wasted on lines enumerating mining terms she doesn't understand and the like.

The parts of the libretto that work best are based on songs or poetry, as with the miners' songs sung by the chorus or the Cantonese rhymes brought to life by talented soprano Hye Jung Lee as prostitute Ah Sing. Mezzo-soprano J'Nai Bridges is a dignified Josefa Segovia, a Mexican-American woman who kills her would-be rapist Joe Cannon and is subsequently judged guilty of murder and hanged. Her words come from poems by Alfonsina Storni.

I really wanted to like this opera as it features John Adams, my home state, and a brilliant cast that includes many people of color. But sadly I found myself rather bored, especially during the first act (the one bright spot being Davóne Tines' aria as Ned Peters at the end). It felt more like a discombobulating lecture in a dream than an opera, though I'll give the piece another chance next week, as it is in my subscription.

* Tattling *
The orchestra level and boxes looked very full, and standing room had a respectable crowd at the rail. A standee did collapse during Act I, but was apparently fine and did not need to be taken out of the hall.

The audience was very polite, and tried to clap after some of the main arias, but was most enthused by the Spider Dance. The opera did get a standing ovation, though I might have heard someone mutter that Peter Sellars deserved a pie in the face. 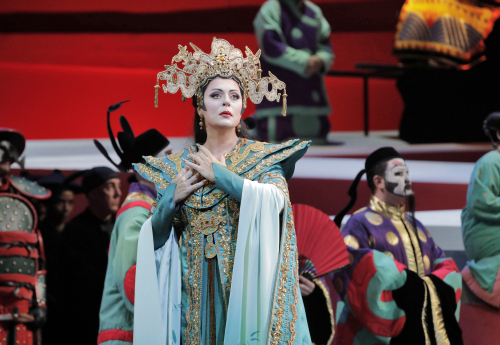 Reviews of San Francisco Opera's Turandot (Martina Serafin in the title role pictured left, photograph by Cory Weaver) have not make me reconsider my decision to skip the opening, but the reviews of the second cast are promising. 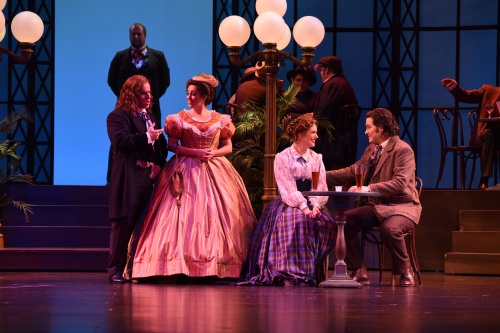 The production has lovely traditional sets and costumes and I appreciated Candace Evans' sympathetic direction, never heavy-handed but with touching details. She seems to have a certain compassion especially for those in service roles, a servant endures cigar smoke as he holds a humidor in Act I and a waiter in Act II gets an extravagant tip only to have it taken by a superior. These specifics go far in drawing you into the world of this opera, despite its unconventional form.

La Rondine, though it has some similarities to the vastly more popular Butterfly and Bohème, has its big aria in the first ten minutes and a much less dramatic ending (spoiler alert: no one dies). Opera San José does make a fine case for the work, no one more so than the orchestra, lead by Christopher Larkin. It wasn't perfect, there were times when the singers dragged slightly or the brass had a stray note, but the playing was light and had a lot of appeal.

The young singers fully embody their roles, and it was hard not to smile at how cute they all are. Maya Kherani and Katharine Gunnick titter and revel as fashionable Yvette and Bianca, friends of our leading lady. Elena Galván, the maid turned opera singer turned maid again, is lively and funny. Her voice sparkles and she plays off of Mason Gates, whose Prunier is also adorable.

Tenor Jason Slayden is an ideal Ruggero, it is easy to see why Magda falls for him, he's tall and handsome and has a beautiful voice. His earnestness in the Act III aria "Dimmi che vuoi seguirmi" is completely convincing. Soprano Amanda Kingston too looks the part, she is very pretty, slim, and graceful. Her voice is powerful and almost strident, her Magda knows her own mind and isn't dissuaded from her pursuits, whether it is leaving her patron in Act II or deciding to return, like the swallow, in the end.

* Tattling *
The audience at Opera San José is ever supportive and gave the Sunday performance a standing ovation. 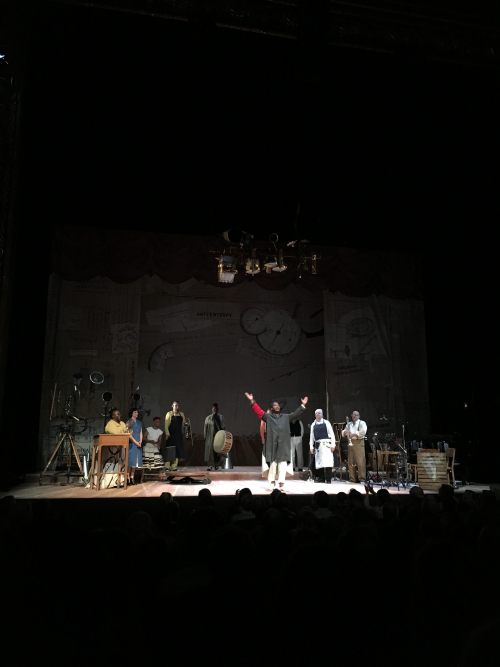 * Notes *
The West Coast premiere of William Kentridge's multimedia extravaganza Refuse the Hour (ovation at Saturday's evening performance pictured) was presented at ACT last weekend before heading south to Los Angeles. The frenetic piece is the companion of Kentridge's Refusal of Time, a video installation recently at SFMOMA, and it too contemplates nature of time and colonialism throughout the world.

The work, billed as a chamber opera,  is chock-full of ideas and features declamations (some backwards) from Kentridge in his characteristic uniform of white button-down shirt and black slacks along with dance from Dada Masilo and Catherine Meyburgh's video design.

Philip Miller's score probably would not stand well on its own, this is very much opera as theater rather than music, but so much the better, it would be distracting for the images and sounds to compete even more than they already were. The musicians were conducted by Adam Howard (who also played trumpet and flugelhorn) also included percussion -- most notably a drum kit attached to the ceiling -- violin, trombone, tuba, piano, and two vocalists. Joanna Dudley's vocalizations were much more like speech, while Ann Masina sounded rather more rich and operatic.

What I loved most was seeing Dada Masilo in person, it was thrilling to watch her move with such speed, elegance, and beauty through the chaos of sounds and images. Her stillness too was impressive, especially when she posed on a circular platform, holding her arms and one leg in large metal megaphones, as Kentridge slowly spun her around.

* Tattling *
The audience was fairly quiet and in any case, it was hard to hear anything much over the sounds coming from the stage.

There was a reception afterward on the fourth floor of Kensington Park Hotel that many of the cast members attended, including William Kentridge, who, like everyone else, was not in his performance costume.

Posted at 10:16 AM in Opera Review, William Kentridge | Permalink | Comments (0) 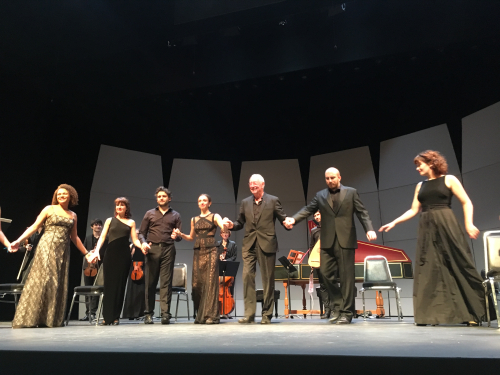 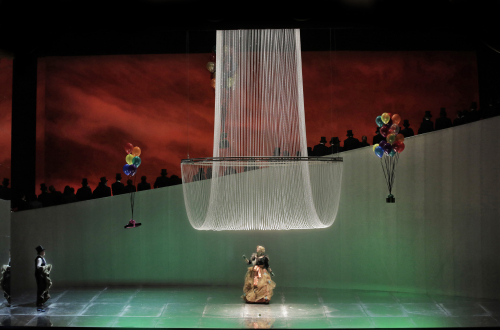