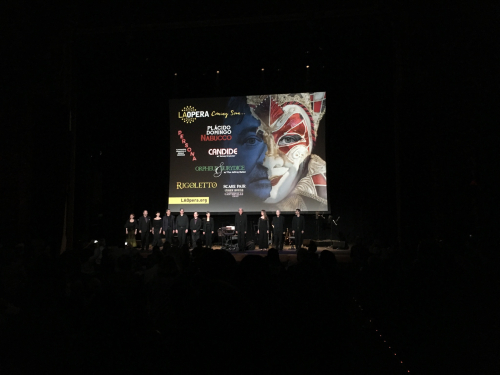 * Notes *
LA Opera just did a short but sweet run of Philip Glass' La Belle et la Bête with the Jean Cocteau film at the ACE Hotel Theatre. It is hard to imagine a cooler venue for the production, the flagship movie house of United Artists is glorious in its 1920s splendor, decked out in Halloween finery.

Seven members of the accomplished Philip Glass Ensemble, including music director and conductor Michael Riesman, played from the stage along with the four fine singers. There were moments when the singing of the score did not synchronize with the lips of the actors, but this is to be expected, since speaking and singing take different amounts of time. Perhaps Cocteau's 1946 film hasn't aged very gracefully, there is a bit of a kitsch factor here and this produced a fair amount of giggles from the audience, especially the first glimpse we get of the Beast and his transformation to Price Ardent at the end.

The singers navigated the difficult music very nicely, everyone but La Belle has to sing more than one role. I liked the contrast of the two female singers and the parallel contrast of the two male ones as well, even though it was hard judge the weight of their voices given all the amplification. Mezzo-soprano Hai-Ting Chinn had a honeyed sound as La Belle, with throaty richness and ethereal high notes. Soprano Marie Mascari was suitably shrewish as mean sisters Félicie and Adélaïde, but her voice was not too shrill or unpleasant. Baritone Gregory Purnhagen (La Bête, Officiel du Port, Avenant, and Ardent) sounded bright and flexible, while baritone Peter Stewart (La Père and Ludovic) sounded plusher and mellower.

This was certainly immersive theater, and it is easy to see why LA Opera chose the piece for its Off Grand series, which aims to attract new audiences.

* Tattling *
I only barely made it to DTLA in time for the Sunday matinée, as the Burbank airport was fogged in. My morning flight from Oakland was in a holding pattern for about an hour, then diverted to Las Vegas where more people were boarded, and arrived where we needed to be around noon.

The audience was much more well-behaved than at the opera house, I heard hardly any talking at all. 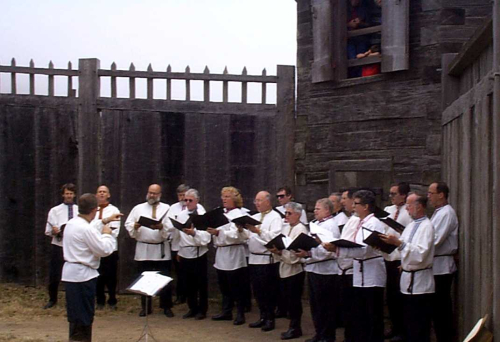 Slavyanka Russian Chorus, an a cappella chorus based in the San Francisco Bay Area, is presenting a festival of Russian choral music starting next Sunday in Berkeley. The festival highlights Russian music from the late 19th and early 20th centuries and includes works by Tchaikovsky, Sergei Taneyev, Rachmaninov, and Pavel Chesnokov.

Most notably there will be two West Coast premieres by Taneyev (who studied with Tchaikovsky): a choral cantata with full orchestra, Ioann Damaskin, and the choral work Sunrise. Seven different ensembles are joining Slavyanka Russian Chorus in the three performances, each with a different program. 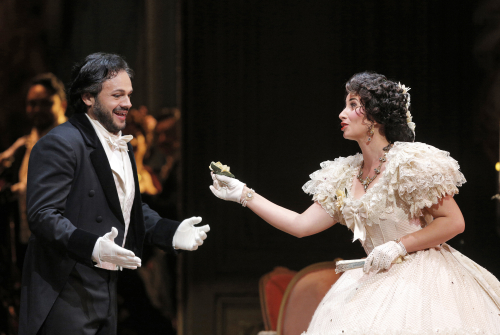 * Notes *
San Francisco Opera's recent La Traviata is very pretty both in the orchestra pit and on stage.

This is Maestro Luisotti's last series of performances as music director, and the orchestra sounded spirited during the Sunday matinée last weekend. I felt like I could hear every individual instrument from the back of the balcony. Though not always with the singers, the effect was still strong.

The production, from John Copley (lovingly known by many as "Uncle John"), is traditional, though has been livened up by Shawna Lucey and includes quite a spanking by Flora of the Marquis d’Obigny in Act II Scene 2 that I don't remember from before.

The singing had much to recommend it, and certainly was not dull. The Adlers all did well, from Amina Edris' sympathetic Annina to Anthony Reed's despairing Doctor Grenvil. Amitai Pati was particularly tantalizing as Gastone, one would love to hear him in a major role, his voice is just so beautiful.

It was fascinating to hear each of the three major principals, all of whom are new to the War Memorial stage. Artur Ruciński may have lacked a certain gravity for Giorgio Germont, he really seemed no older than his son, but his reedy, plaintive sound was lovely. Atalla Ayan (Alfredo Germont) had a wonderful rich warmth, though there were times when his voice did seem to disappear into the orchestra, as at the end of Act II, Scene 1.

Aurelia Florian has a bright, though bordering on shrill voice, but her Violetta is convincing, and she has an appealing, delicate quality that works nicely for a consumptive. She does express a lot of emotion through her sound, and could channel a wounded animal or a sweet angel depending on what was required.

* Tattling *
One definitely missed the seriousness of the Elektra audience during this performance. Many people were late as it was Fleet Week and the last day of Hardly Strictly Bluegrass, and traffic getting into San Francisco must have been bad.

Then again, standing room upstairs was nearly empty and I could place myself away from those who needed to chatter during the music. 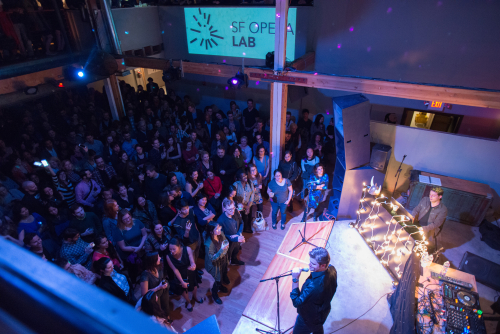 SF Opera Lab is back with another pop-up (previous event pictured left, photograph by Kristen Loken) next Thursday at the dance club Mezzanine in San Francisco.

The theme is electronic dance music (EDM) and opera, and will feature Adler Fellows and Loves Company. I asked co-hosts and Adler Fellows Anthony Reed and Aria Umezawa a few questions about curating this event.

Reed is a singer that has a whimsically funny vlog, My BASSic Life, about being an operatic bass and is half of the EDM group Rœhn.

Umezawa is a director who recently had a successful run of Hamlet at West Edge Opera. She is also the co-founder and artistic director of Toronto-based independent opera company Opera 5 and has an online web-series called "Opera Cheats."

How are EDM and opera similar?

Anthony Reed: That is something we have been trying to figure out during this process, and it's been a fun task. I think both forms have the power to seep into people's skin. Opera helps people escape into the lives of the characters on stage. Seeing the characters on stage can reflect and mirror one's own personal experiences and add new insight into whatever it is going on in your life at the moment. EDM helps people escape into sheer sonority. With sweeping pads, incessant rhythms, and undulating melodies it's easy to ride the highs and lows and sometimes even enter into a meditative state.

Aria Umezawa: Opera and EDM are not subtle art forms - they are both about big emotions and big moments, and how the music builds up to them. With both genres it can feel as if you are on a rollercoaster climbing a huge hill, just waiting for the drop on the other side. In many ways, they're a perfect fit!

What are the challenges of blending these genres?

Anthony: Opera by nature is an entirely acoustic art form. The glory of opera is that a single human voice can project over an entire orchestra without the assistance of amplification. There are no electronics required to send the sound into a space and directly touch the listener. EDM is the polar opposite, in most cases doing away with acoustic instruments all together. The hardest part about this event is marrying the acoustic to the electronic.

Aria: Finding repertoire that would work was a bit complicated. Anthony and I both have diverse tastes when it comes to music, and when faced with a dance party themed show, we really had to resist the urge to do more crossover pieces like "Bohemian Rhapsody." We focused on choosing works that have a great beat or that match the emotional arc people look for in electronic music.

What are we to expect from this event? What exactly will the mashups be like?

Anthony: I think people can expect to have a great time experiencing a genre blend they may never get a chance to be a part of again. Some of the singers will get a chance to affect their voices electronically and the DJs will sample some opera singing into their set lists. Ultimately we are striving for something cohesive, but the fact that these two seemingly disparate genres are existing in the same space, simultaneously, is exciting on its own!

Aria: I think you can expect to dance, to party, to hear great singing, and to hear great spinning. The mashups we have planned are going to play with both what technology can do with the operatic voice and seeing what classical music can bring to electronic music.

You have worked together before on a recital that blended art song and romantic comedy. Was that helpful in putting together this event?

Anthony: Doing my Rom-Com recital [The Woods: A Rom-Com Recital, April 9, 2017] was an exercise in thinking outside of the box. One of my biggest fears as an entertainer is to bore people. Meeting expectations is an easy way to manifest that fear. So, in everything I do, I try to approach things from a new angle that gives old forms fresh perspective. The nature of this event is that there is no box, so the challenge is trying to create one to fill.

Aria: Working together on The Woods gave us a chance to get to know each other, which I think was very helpful. I am, frankly, in awe of how creative Anthony is and how thoughtful he is as an artist. I think he's exactly the type of person that you want to partner with on a project like this, because he brings so much to the table while being collaborative.