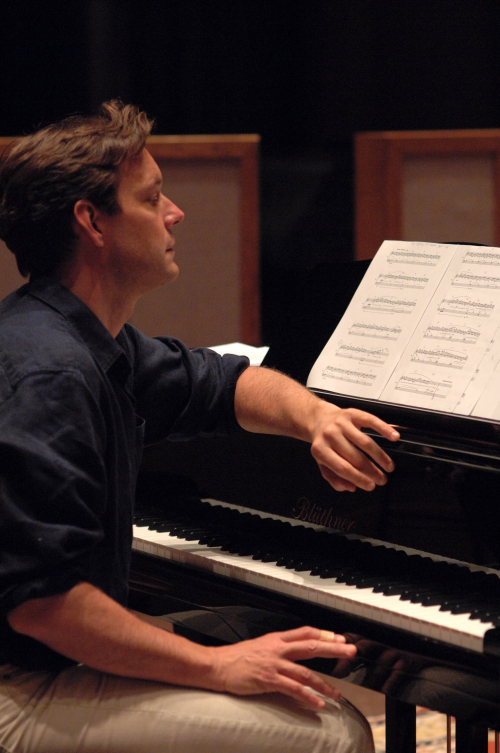 It's A Wonderful Life, a new opera by composer Jake Heggie (pictured left, photograph by Art & Clarity) and librettist Gene Scheer is based on Frank Capra's 1946 film and will have a West Coast premiere at San Francisco Opera in the 2018-19 season. The work has a world premiere at Houston Grand Opera this Friday. 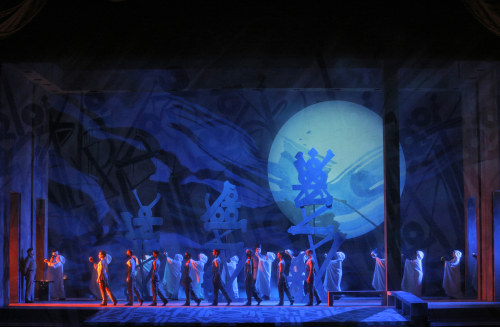 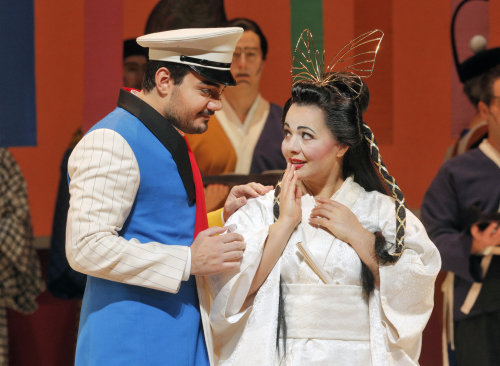 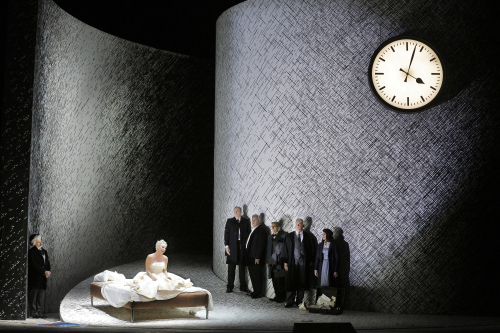 * Notes *
San Francisco Opera ends 2016 with yet another run of Madama Butterfly after only two years, but with a very fine soprano in the title role that makes it worth the time to hear again.

I am not a big fan of Puccini or of this opera with its Orientalist theme, however, Lianna Haroutounian (Cio-Cio-San) had me right away. She is completely emotionally engaged and her brilliant, flexible voice is never seems strained or constricted. The support of the orchestra, which was a little fast in Act I under Yves Abel, was wonderful in Act II.

The rest of the cast is likewise strong, as has been the case all season. Tenor Vincenzo Costanzo's US debut as Pinkerton was notable, his voice is plaintive, with much vibrato at the top, but not at all unpleasant. His duet with Butterfly at the end of Act I seemed quite heartfelt and lovely. In his San Francisco Opera debut, Anthony Clark Evans was a warm Sharpless.

Zanda Švēde (Suzuki) was not her usual self, as she was ill, but she did fairly well and certainly hit all her marks as far as acting is concerned. Julius Ahn was an unctuous Goro whose sliminess reads with perfect clarity even from the very back of the house. Raymond Aceto made for a convincing Bonze.

The revival production (Act I pictured above, photograph by Cory Weaver), designed by Jun Kaneko and directed by Leslie Swackhamer, has much appeal in its spiraling circular stage filled with concentric circles and off center round platform. The set forces a certain kind of movement to navigate, which is more apparent from above, and keeps the staging from ever feeling static.

This is helped also by the many screens raised and lowered for moving projections and by the four stagehands dressed in black (kurogo). The scenes keep moving without having to stop the drama or music.

* Tattling *
A group of six sat near me in Row L Seats 118 to 128, and they chattered a lot when Haroutounian was not singing. I was able to ignore them, especially since I kept crying during Act II. * Notes *
The most spectacular part of San Francisco Opera's new Aida is undoubtedly the singing, with the orchestra coming in as a close second. Last night's opening performance features the elegant work of contemporary artist RETNA but Francesca Zambello's production is stark and static.

RETNA's art is clearly influenced by calligraphy and graffiti, and it is heartening to see San Francisco Opera engage a younger and more diverse scenic designer than usual. Some of the scenes are quite striking while others are less so. There are a lot of grey walls, monumental painted designs, and bold lighting choices in blocks of color. The triumphal march scene of Act II Scene 2 (pictured above, photograph by Cory Weaver) is disappointing, except for the final flash of glitter, while Act III, which features a huge moon swirled with clouds, three enormous calligraphic cutouts, and lovely blue lighting was much more visually arresting.

The first half did not have pauses to switch the four scenes but the second had two after both scene changes. The energy level always goes down in these moments, people turn on their cell phones or start talking, the music starts again, and it takes at least a minute to get back into the world of the opera again.

Zambello focuses on the human dramas of the piece, and eschews the cliches of elephants and sphinxes. The ballet was embarrassingly uncool, soldiers hopped around cheerfully as they threw around a lady captive in the triumphal march scene. The boy acrobats in the scene before in the chamber of Amneris was much more on point.

There was quite a bit of simple standing and singing, Zambello never gets in the way of the singers, and this cast is vocally powerful. It was gratifying to hear former Adlers Leah Crocetto and Brian Jadge in the two lead roles of Aida and Radames, they've come so far in the last few years and watching them develop over time has been great. Crocetto has a gorgeous legato and her voice commands attention, even though her acting does leave something to be desired. Jadge sounded strong throughout. The duet at the end, with the two of them sitting in front of a grey yet iridescent wall was the high point of the evening, both singers sounding beautifully sweet.

Ekaterina Semenchuk made for a fine Amneris, her voice is more delicate than Crocetto's, but has both rich creaminess and brilliance. Her appearance at the end of the opera above the protagonists -- she is shown through the scrim -- was decidedly odd. George Gagnidze gave a commanding performance as Amonasro, while Raymond Aceto's Ramfis sounded a bit shaky, at least at first.

The three small solo roles were taken by current Adlers. The King of Egypt seemed to sit a little low for Anthony Reed, Toni Marie Palmertree sounded more comfortable as a Priestess, and Pene Pati sounded wonderful as a Messenger. One looks forward to hearing these emerging talents in more meaty roles in the years to come.

* Tattling *
The orchestra level of the opera house and the boxes looked completely full. It was relatively quiet, someone around Row Z Seat 124 had a mishap with Siri on his phone, she couldn't understand what the overture was saying, apparently. 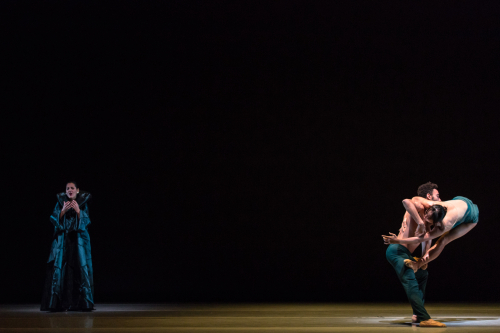 * Notes *
Alonzo King Lines Ballet opened a new season at Yerba Buena Center for the Arts last night. Though I enjoy contemporary dance and have walked past the Lines Ballet space countless times on 7th Street, I had not seen this company until now. It took an opera singer, of course, to get me to this performance. Despite the "ballet" in the name, there was not a tutu in sight, and the dancing eschewed mere prettiness, and it was well worth the effort to experience.

The opening piece, Art Songs, is a world premiere and features live music sung by mezzo-soprano Maya Lahyani (pictured left with Yujin Kim and Michael Montgomery, photograph by Quinn B. Wharton) with accompaniment from pianist Efrat Levy and violinist Lisa Lee. The songs include three Baroque pieces -- a Bach cantata and arias by Handel and Purcell -- plus Schumann's "Stille Tränen." It isn't rep I associate with Lahyani, who was an Adler at San Francisco Opera in 2010 and 2011 and is a regular at the Met these days. But she sounded fine, especially in the Dido's Lament that ends the piece. There were a few tiny froggy moments in a low note or two, but Lahyani was ill, and did remarkably well considering.

The choreography has a raw, exposed quality to it that works really nicely with the singer on stage. I loved that there were no supertitles and there was no escaping the music or the dancing. The dancers are alive in the movement, even if they are only standing or walking. The piece was even disturbing, particularly the fourth part with soloists Yujin Kim and Michael Montgomery, there was much falling, and the pair looked more like an awkwardly beautiful many-limbed creature than ballet dancers engaged in a duet.

The second piece was Meyer, with recorded music from bassist/composer Edgar Meyer, and again the dancing had a wonderful brutality at odds with classical ballet. The female dancers wore pointe shoes, yet there were many times when they were not en pointe, or flexed their feet when their legs were aloft. The piece features an elaborate water machine with streaming jets in the background which was used to great effect. It was hard to look away from this one, even when images turned dark, as with the fifth part "Cards," in which a rather frantic dancer piles and moves pieces of paper, at times licking one or two.

* Tattling *
The audience was quiet. Some of my opera fanatic friends left at intermission after hearing Maya, as they were much more interesting in the music rather than the dancing.