Tenor Richard Croft has withdrawn from San Francisco Opera's Usher House and La Chute de la Maison Usher for personal reasons. He is replaced by Jason Bridges, who will sing Edgar Allen Poe in Gordon Getty's piece and Joel Sorensen, who will sing Le Médecin in Debussy's opera. The production runs from December 8 to 13, 2015.

* Notes *
Lucia di Lammermoor closed last Wednesday at San Francisco Opera with Albina Shagimuratova as the title character, substituting for Nadine Sierra, who was ill. Shagimuratova herself has been sick and had not yet performed her role as the Queen of the Night in the current run of The Magic Flute that ends November 20.

The performance of Lucia was tantalizing, Shagimuratova has a powerful voice that is a good match for the other great singers sharing the War Memorial stage with her. On the down side, she was obviously still ill, and no amount of wonderful singing could save the terrible production, which looks even worse in close quarters, I discovered.

Shagimuratova's voice is exceedingly dark but she has brilliant high notes. Her Lucia was less safe than Nadine Sierra's, and more emotional. Shagimuratova did lack the sweetness and innocence that Sierra brought to the role. That said, it was exciting to hear Shagimuratova, and we are lucky to be able to get such talent at the last minute.

Michael Cavanagh's staging is pretty darn silly. Ghosts appear nearly every time the word "ghost" is mentioned, and it made my date laugh almost every time, which is hardly an appropriate reaction. It interesting to see that the production team did not try to put Shagimuratova into Sierra's costumes, or even ones that approximated them. Since neither set of outfits really fit in with anything else on stage, it was perfectly fine.

* Tattling *
There were giggles heard not only from my opera companion, but in adjacent boxes and even from the Grand Tier, particularly when Arturo's body was revealed in the mad scene.

Nadine Sierra has taken ill and tonight Albina Shagimuratova (pictured left) will replace her in San Francisco Opera's final performance of Lucia di Lammermoor this season. Shagimuratova is currently cast as The Queen of the Night in The Magic Flute, but did not sing the opening performance. Sierra, you'll remember, herself was replacing the ailing Diana Damrau. Let's hope everyone feels better soon.

Greer Grimsley has withdrawn from San Francisco Opera's upcoming Die Meistersinger von Nürnberg, because of "ongoing health issues." He is replaced by James Rutherford (pictured left). This is the seventh announced cast change of the season.

* Notes *
A revival of The Magic Flute opened at San Francisco Opera last night. The production has been beset with casting changes since August, and two more were announced from the War Memorial stage by General Director David Gockley before the performance. Adler Julie Adams sang First Lady for Jacqueline Piccolino and Kathryn Bowden filled in for Albina Shagimuratova, both replaced artists were apparently ailing. All four substitutions were more than adequate, in fact, Efraín Solís as Papageno and Sarah Shafer as Pamina (pictured above, photograph by Cory Weaver), standing in for former Adlers Philippe Sly and Nadine Sierra, may have stolen the show.

Solís has a ton of charisma, and is an absolute delight. His voice has much warmth and liveliness. Shafer gave a distinctive and emotionally nuanced performance, quite a feat as Pamina can be a pretty flat character. Kathryn Bowden muscled through her arias, her Queen of the Night did not sound ravishingly beautiful but she definitely hit every note and it was impressive, if not a bit terrifying.

The three ladies, Julie Adams, Nian Wang, and Zanda Švēde, sounded wonderful and there was no shrillness at all. Greg Fedderly perfectly reprised his role as Monostatos and was entirely hilarious during the magic bell scene when Papageno enchants him and the male chorus. Paul Appleby was fine as Tamino, though somewhat wooden, his sound is bright and has good volume.

The orchestra did not shine under the baton of conductor Lawrence Foster. There were a lot of obvious errors, the balances were off and the playing was sloppy. In fact, the chaos made me feel seasick, and I had to close my eyes to regain a sense of stillness.

Jun Kaneko's production is still as adorable as ever. It is not a dramatic rendering and does not help explain what is going on in this opera, but the abstractness of the design helps keep the action moving and is attractive.

The English translation is awkward but seems to engage the audience. I often indulged myself in thinking of the original German lines as the performers sang. One has to feel for the non-native English speakers in this piece, accents are fairly noticeable and the words are a compromise at best, so can sound stilted even when sung by Americans.

* Tattling *
There were some whispers but the back of the balcony was relatively well-behaved.

* Notes *
A new production of Lucia di Lammermoor opened last night at San Francisco Opera with local favorite and Adler alum Nadine Sierra in the title role. There was much beautiful singing and playing, but while there were many strong elements in the staging, it didn't add up to a cohesive performance.

Sierra cut short a run as Zerlina in Paris Opéra's Don Giovanni to replace Diana Damrau, who is on vocal rest. The young soprano started off the evening sounding slightly pinched, but recovered and has a gorgeous voice with excellent consistency. She looks fabulous as Lucia and her face is expressive, those doe eyes convey a lot. She lacks a certain raw intensity in her madness, which came off as very pretty but somewhat impassive, at least vocally.

One also missed the eerie glass harmonica that we heard in San Francisco Opera's 2008 production, though the flute player was strong, and even joined the cast and crew for a well-deserved ovation. Maestro Nicola Luisotti had the orchestra going rather fast, and got ahead of the singers, but only overwhelmed in volume once or twice.

Piotr Beczala sang Edgardo with warmth and brightness, and Brian Mulligan was completely convincing as the conflicted Enrico, his sound rich and emotional. Their Wolf Crag scene (Act III, Scene 1 pictured above, photograph by Cory Weaver) was arresting, and this was one of the more interestingly staged, on a black and white checkered floor that seems to be floating in clouds.

The production, directed by Michael Cavanagh, is efficient and has stylish sets and costumes, and some silly video projections (lots of water and huge statue heads). The mad scene takes place in the bridal chamber, and the set opens up to bring the chorus into the action. This works well, and the contrast of colors is striking. The green, blue, and purple of the chorus women's gowns with the grey set is attractive, and they wear enormous flower-shaped hats which is always a plus.

* Tattling *
Was happy to run into an opera devotee who recently moved to San Francisco from New York. He was accompanying a young lady to her first opera. 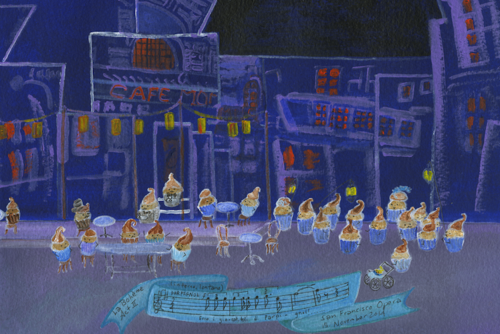 In Act II of La Bohème, the bohemians celebrate Christmas Eve at Café Momus in the Latin Quarter.

This painting and thirty others are on display at Borderlands Cafe in San Francisco until November 30, 2015. If you aren't going to Lucia di Lammermoor on Sunday, the art opening is from 3:30pm to 5:30pm.

* Notes *
San Francisco Symphony is in the midst giving the West Coast premiere of Ted Hearne's Dispatches as part of its New Voices initiative. The opening performance on Wednesday night was engaging, Hearne's music is richly textured and highlights percussion and celli. The cello players in fact each had to place wine corks between the G and D strings for the middle movement.

The new music was paired with Barber's Knoxville: Summer of 1915. Soprano Susanna Phillips gave a crystalline account of the piece, her voice was never overwhelming, but has a brightness that cuts through the orchestra without being harsh. Her face is very expressive.

* Tattling *
The people around us on the left side of the orchestra level were fairly quiet. Among those seated nearby was composer John Adams.