* Notes *
Michael Tilson Thomas and San Francisco Symphony recently recreated a 1808 concert at the Theater an der Wien of Beethoven works. The engaging performance on Saturday night lasted four hours and forty minutes with three intermissions and required a chorus, two different versions of the orchestra, seven vocal soloists, and a pianist.

Undoubtedly a high point of the evening came when soprano Karita Mattila (pictured left, photograph by Lauri Eriksson) sang Ah! perfido, Opus 65, the second piece on the program. Her voice is gloriously resonant from top to bottom and her performance was riveting.

The other major soloist, Jonathan Biss, played Piano Concerto No. 4 with precision. He is not without passion, but channels the emotions of the piece with subtlety. Later, in place of where Beethoven improvised on the piano in the original concert, Biss took the stage for Piano Fantasy in G minor, which showed his virtuosity.

The concert began with one set of personnel making up the orchestra, playing the first half starting with Beethoven's Sixth. It was strange to hear this piece without William Bennett playing the oboe soli, though both clarinetist Carey Bell and bassoonist Stephen Paulson played beautifully. The horns were not clear. Somehow the phrasing of the music did not have a nice arc. The Fifth, which came after the second intermission, was significantly stronger.

The chorus sounded cohesive in the selections from the Mass in C major. Of the four soloists, tenor Nicolas Phan was a stand out, though they all sang well. Everyone did wonderfully in the Choral Fantasy that ended the concert, and the piece made sense as a finale for this epic performance, as it brought back our piano soloist, most of the principal singers, the chorus, and the orchestra.

* Tattling *
Someone behind a friend of mine in the Right Terrace kicked his chair and insisted he was being disrespectful for not applauding enough.

* Tattling *
Since this performance was in the afternoon, there were even more watch alarms at each hour than usual. An excited older couple sat next to me in Row T Seats 5 and 7. They loved the piece and there was extended commentary after nearly every aria.

* Notes *
San Francisco Opera gave the world premiere of Two Women (La Ciociara) last night. The narrative is compelling. Marco Tutino's sweeping music has a cinematic feel and is pretty. The orchestra sounded engaged under the direction of Maestro Nicola Luisotti. The percussion was particularly gripping.

All of the singing was strong. The chorus impressed. The two leads — mother and daughter — are the most nuanced of the cast and the contrast of the two sopranos in these roles is effective. Anna Caterina Antonacci is an intense Cesira, her anguish was palpable. Sarah Shafer's Rosetta is sweet and haunting. Yet her dissoluteness in Act II, Scene 3 is convincing.

The other characters are less subtly drawn, the good are angelic, the bad are monsters. Tenor Dimitri Pittas is an idealistic, gentle Michele. He had some strain in his voice when he sang with the chorus in Act I, Scene 2, but otherwise he sang plaintively. Baritone Mark Delavan delighted in playing the evil Giovanni. Though his sound can be light, he is a persuasive villain.

In the smaller parts, the Adlers did well. Mezzo-soprano Zanda Švēde was moving as Lena. Baritone Edward Nelson is completely plausible as John Buckley, the U.S. Air Force lieutenant saved by Michele.

Francesca Zambello's production (Act II, Scene 2 pictured above, photograph by Cory Weaver) is attractive. The projections could be busy and garish, but more often helped further the story without being intrusive.

* Tattling *
There was light whispering on the orchestra level at the start of most scenes. The audience was clearly moved by the piece and the standing ovation at the end was nearly immediate.

* Notes *
Yesterday mezzo-soprano Michaela Martens (pictured left in Act II, photograph by Cory Weaver) sang Cassandra in San Francisco Opera's Les Troyens. She sings again on June 20, 2015. Martens has a lovely resonant voice with powerful low notes and searing high ones. Compared to soprano Anna Caterina Antonacci, with whom she shares the role, Martens is less raw and does not convey the same complete devastation. It is worth the effort to hear both singers, both are gratifying in different ways.

It was a delight to hear Maestro Donald Runnicles conduct the orchestra again. The woodwinds had a gorgeous, velvety sound, the strings shimmered, and the brass was bright and fluid. The chorus was powerful and the rest of the singing was consistently impressive.

* Tattling *
A woman in Box B whispered a lot during Act II. This might not have been noticed but her voice is high and squeaky, so I had to angle my chair in a way so I could focus on the orchestra. 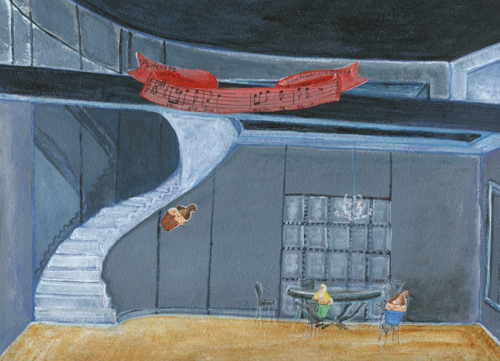 In Act I, Scene 4 of Partenope, the rather shy Prince Armindo of Rhodes expresses his love for Queen Partenope, but she is, of course, not there to hear him.

* Notes *
Charles Dutoit (pictured left) conducted San Francisco Symphony in its first performance of Ravel's L'Heure espagnole last night. The orchestra sounded elegant and the cast had a wonderful sense of comic timing in this concert version of the piece.

Mezzo-soprano Isabel Leonard (Concepcion) has a vivid, smoky voice. She was able to convey hysteria in the edges of her voice that is suited to the role. Baritone Jean-Luc Ballestra sounded healthy and strong as Ramiro. One got the sense he enjoyed singing with the other principals and with the orchestra. Tenor Jean-Paul Fouchécourt was a bright-toned Torquemada, while tenor John Mark Ainsley's Gonzalve was light and funny. Likewise, baritone David Wilson-Johnson was a diverting, pompous Don Iñigo Gomez. The dry wit of this opera came through.

The first half of the program began with Ravel's Alborado del gracioso. The short piece sparkled and shimmered. The bassoon sounded particularly beautiful. Pianist Javier Perianes was the soloist in Nights in the Gardens of Spain by Falla that followed. He often carefully watched Dutoit and did not play in an overly flamboyant manner. The piece often demands a strong percussive quality of the soloist and Perianes played these passages well.

* Tattling *
There was much giggling during L'Heure espagnole and even a few loud guffaws.

The program also features Ravel's Alborado del gracioso and Falla's Nights in the Gardens of Spain.