* Tattling *
There was light whispering during the first act. Watch alarms sounded at 9pm. Audience attrition was noticeable after each intermission. 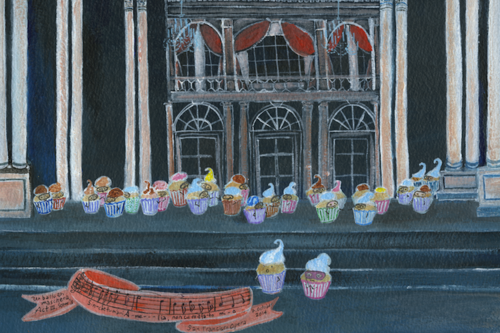 In Act III, Scene 3 of Un ballo en maschera, the Swedish king Gustavus III has resolved to renounce his love for Amelia, the wife of his chief minister Anckarström.

Details of Painting | Performance Reviews of Un ballo in maschera

* Tattling *
There was a ton of talking but most of it was in response to the performance, so at least it was nice that the audience members were engaged. The woman in front of me in Row O was impressed by the petite stature of one of the tenors. The man behind me in Row AA said "wow" about thirty times.

Michaela Martens (pictured left) will sing Cassandra in the second and fourth performances of San Francisco Opera's Les Troyens, which runs from June 7 to July 1, 2015. She replaces Daveda Karanas, who has withdrawn from the role due to pregnancy. Anna Caterina Antonacci, who was previously announced to sing three performances of Cassandra, has agreed to add a fourth on July 1, 2015.

* Notes *
Opera Parallèle is holding the first North American performances of Tarik O'Regan's Heart of Darkness at Z Space in San Francisco this weekend. The challenge of taking a well-known text must be great. Tom Philips condensed Conrad's novella into a spare libretto. The ninety minute work is relentless, there is no intermission, but in the end it dissolves into silence. The scene about wanting rivets was amusing. The most famous lines of the book were handled gracefully.

Opera Parallèle made a compelling case for this chamber opera. Maestra Nicole Paiement conducted the fourteen musicians of the orchestra with verve.

The cast is uniformly strong. It was striking to hear soprano Shawnette Sulker sing the River Woman. She can sound sweet and bird-like, but here she showed grit and passion. Tenor Thomas Glenn was a vivid Harlequin. Baritone Aleksey Bogdanov's low notes as the Doctor and the Boilermaker were forceful yet humorous. Tenor Michael Belle sounded warm as the Chief Accountant and the Helmsman. Bass-baritone Philip Skinner seemed rumbling and ancient as Kurtz, clearly conveying illness and madness. Tenor Isaiah Bell was a youthful Marlow, his voice is bright and he sings with ease.

Director Brian Staufenbiel uses the compact space to fine effect. Audience members surrounding the stage wore light-colored ponchos and held tusks created by Jon Altemus. Illustrations by Matt Kish were projected in the background and on the floor. The ink on watercolor paper images are bold, animating them could be dizzying, though this worked nicely when the action took place on the river.

* Tattling *
One watch alarm was noted at 3pm during Saturday's matinée. One person whispered loudly during the instrumental threnody.